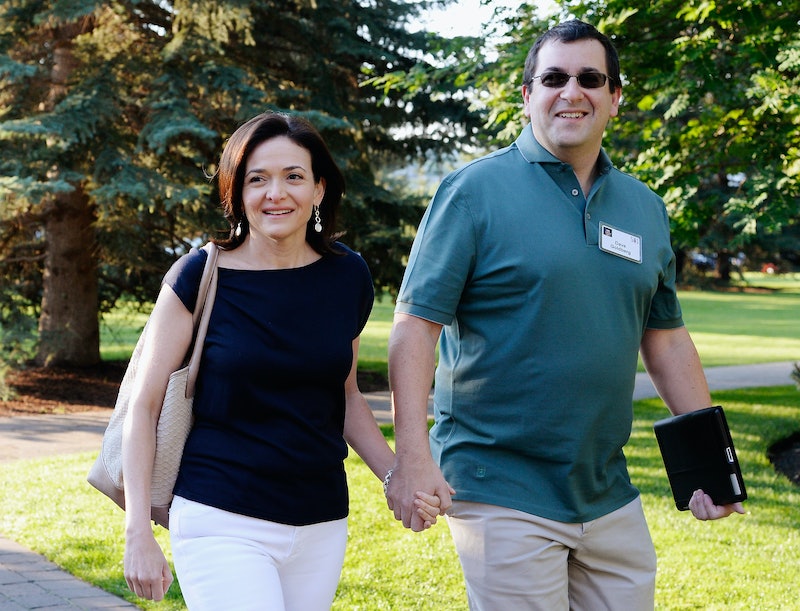 It has emerged that Dave Goldberg, SurveyMonkey CEO and Sheryl Sandberg’s husband, died suddenly Friday night. Goldberg’s 2004 marriage to Sandberg, chief operating officer of Facebook and bestselling author of Lean In, produced a formidable Silicone Valley power couple. The cause of Goldberg’s death, at the age of 47, was not immediately evident. The deceased’s brother, Robert Goldberg, broke the news on Facebook Saturday evening with a simple message. “It’s with incredible shock and sadness that I’m letting our friends and family know that my amazing brother, Dave Goldberg, … passed away suddenly last night,” he wrote. (Update: The Associated Press reports that Goldberg died in the gym after exercising. The exact cause of death remains unknown.)

Mark Zuckerberg, CEO of Facebook, said Goldberg had died while on vacation with Sandberg, The New York Times reported. He is survived by Sandberg — who has consistently credited Goldberg with her ability to freely pursue career success — their two children, and his mother.

Goldberg began working for SurveyMonkey, a cloud-based survey site, in 2009, after working for Benchmark Capital and Yahoo. “Dave’s genius, courage and leadership were overshadowed only by his compassion, friendship and heart,” SurveyMonkey said in a statement following his death. “Our sympathy goes out to them [Goldberg's family] and to all who were touched by this extraordinary man. We are all heartbroken.”

Just last month, Goldberg spoke about trying to get started in the tech industry in the '90s, telling Business Insider that he had run up extensive credit card bills to fund his first online venture, the music site Launch Media. Under Goldberg’s leadership, SurveyMonkey grew from a small business with a team of 14 to a tech powerhouse with 500 employees and a valuation in 2014 of almost $2 billion. The site racked up 25 million customers, BBC News reported.

Goldberg’s commitment to, and passion for, his work was matched by that of Sandberg for hers. The couple met while working for Yahoo. Sandberg, currently ranked the ninth most powerful woman in the world by Forbes, wrote in Lean In (her controversial but bestselling manifesto for the ambitious modern woman, published in 2013) that her partnership with Goldberg had allowed her career to thrive. She advised, with obvious affection:

I truly believe that the single most important career decision that a woman makes is whether she will have a life partner and who that partner is… When it comes to settle down, find someone who wants an equal partner. Someone who thinks women should be smart, opinionated and ambitious. Someone who values fairness and expects or, even better, wants to do his share in the home.

The couple lived in Menlo Park, California, with their two children. Goldberg, who had previously lived in Los Angeles, recently joked, “I lost the coin flip as to where we were going to live.” His flexibility and his support for his wife frequently cropped up in Sandberg’s statements. In a March 5 Facebook post, Forbes reported that she again paid tribute to her husband — simply writing, “The best decision I ever made was to marry Dave.” Based no doubt on her own experiences, Sandberg recently said that men were an integral part of the fight for gender equality in the workplace.

Goldberg was also a committed father. He told the Los Angeles Times in 2013 that, no matter their hectic work schedule, he and his wife made time for the kids. “We made the decision on this particular thing, that we are going to be home with our kids. I am at home with my kids from 6 to 8... But we’re working at night. You’ll get plenty of emails from me post-8 p.m. when my kids go to bed.”

Since the announcement of his death, tributes for Goldberg have begun pouring in. David Pakman, a partner at the venture capital firm Venrock and long-term friend of Goldberg, told The New York Times, “He was both humble and modest, particularly endearing traits given his fantastic success and stature in the valley. … He was generous with his time, introductions and advice.”

Robert Goldberg requested in the statement confirming his brother’s death that people express their condolences by posting memories of Goldberg to the deceased’s Facebook profile. Zuckerberg posted a statement to his own profile, writing: “Dave Goldberg was an amazing person and I am glad I got to know him. My thoughts and prayers are with Sheryl and her family.”

More like this
Graham Norton’s 10 Best Eurovision Zingers Will Leave You Howling
By El Hunt
At 28, Minnie Driver’s Personal Life Was “Falling Apart”
By Kate Dwyer
We've Got A Text! Our First Look At 'Love Island' 2022 Has Arrived
By Sam Ramsden
Ed Hardy-Inspired Cross Nail Designs Are Majorly Trending
By Danielle Sinay
Get Even More From Bustle — Sign Up For The Newsletter