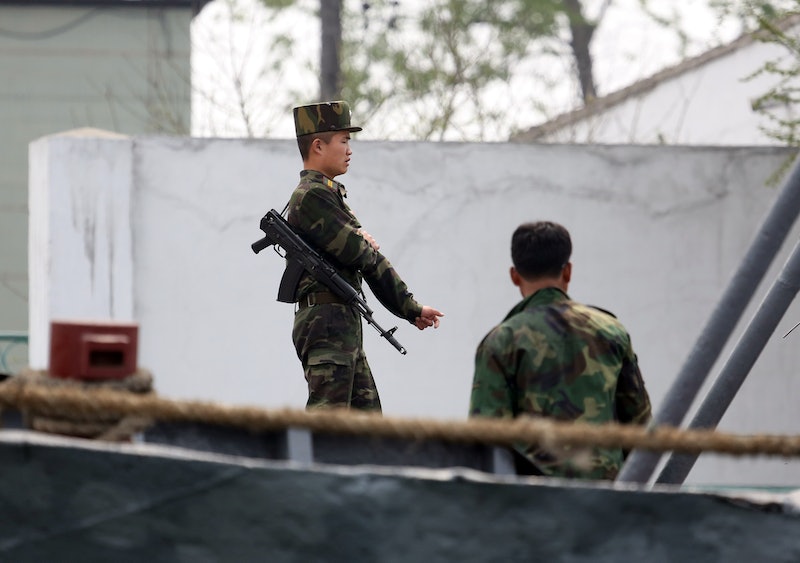 A South Korean New York University student has been detained in North Korea according to the Korean Central News Agency, North Korea's official media organization. The 21-year-old Joo Won-Moon allegedly crossed into North Korea from Dandong, China, by way of the Yalu River, which partially borders the two countries. Originally from South Korea, Joo is a permanent resident of New Jersey. According to NYU spokesperson John Beckman, Joo was indeed a junior at the Stern School of Business, though he wasn't currently taking classes. The school has been in contact with both the U.S. State Department and the South Korean Embassy. NYU has also been in contact with Joo's family.

The Korean Central News Agency claims Joo has acknowledged that is actions were illegal, though little information is known about his current whereabouts or condition. Joo was detained April 22. He was subsequently arrested and charged with illegally entering North Korea. Prior to Joo's arrest, numerous Americans had been detained in the secretive country, the most recent of whom were released late last year. Korean-American Christian Missionary Kenneth Bae had been detained in the country for years following North Korean charges for allegedly proselytizing. American Matthew Miller was detained after arriving with a tour group and allegedly ripping up his tourist visa and announcing he was seeking asylum. Both were released in November of last year. An additional detainee, Jeffrey Edward Fowle, was released in October 2014 after he had been arrested for allegedly leaving a bible at a night club.

Sadly, Joo is not alone as a South Korean detainee, either. Two South Korean men have been held in North Korea since March. Kim Kuk-gi and Choe Chun-gil are accused of spying on North Korea and have both allegedly confessed as such, though North Korea has coerced its detainees before, allegedly forcing them to make false claims that favor the country's narrative. According to Korean War veteran Merrill Newman, an American who was detained in North Korea two years ago, the country's regime forced him to make a fake apology during a press conference. Newman was detained for asking about "anti-communist partisans he had helped train more than 60 years ago," according to The Washington Post.

In addition to Kuk-gi and Chun-gil being detained in North Korea, there is an additional South Korean detainee who has been trapped in the country for similar alleged proselytizing as American detainee Bae. Kim Jong Uk was sentenced to a lifetime of hard labor for his alleged crimes of attempting to set up underground churches and spying on North Korea. It is currently unclear when Joo will be released from North Korea and if he will be charged for additional crimes aside from illegal entry.