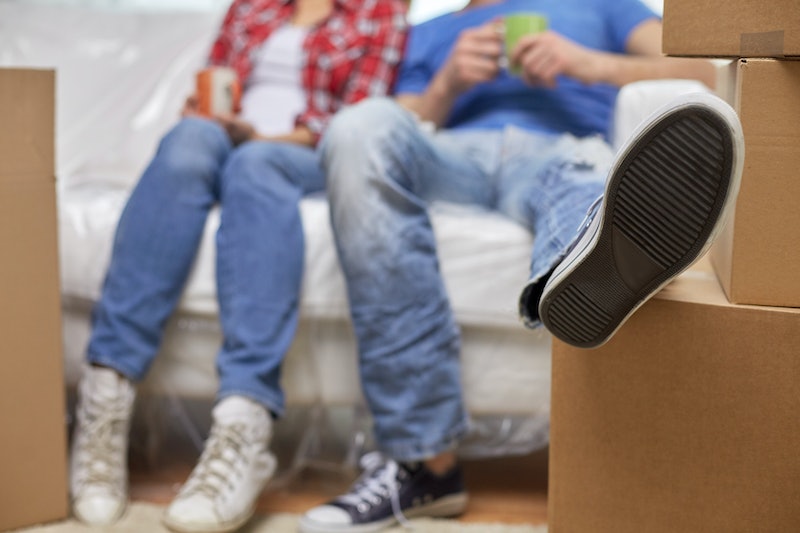 When my husband started looking for a new job in the fall, we assumed we'd be staying in New York, which I'd called home for almost five years (almost 10 for him) — we had no idea we'd be moving across the country. But all it took was one exciting-looking startup job description to put us on a whirlwind path to moving from Manhattan to San Francisco with less than one month of notice. He interviewed with the startup during the first weekend of April and now, this first weekend of May, I'm writing to you from sort of sunny (but sort of foggy) San Francisco proper. This was actually my third cross-country move, but it was definitely the most major.

In retrospect, I've certainly done crazier things than relocate from one of the country's most exciting cities to another for a genuinely exciting professional opportunity but, needless to say, a cross-country move is no small thing. It's fun to imagine life in another city, but reality dictates that first you're going to have to physically get yourself (and your stuff) from point A to point B. Perhaps you too are seriously contemplating a move across the country, and are wondering what the actual process is like. Or maybe you're thinking of taking the leap spontaneously. Since I've been there and done that, let me explain some things to know before you move across the country. You can start your planning now, and thank me later.

1. Start with the logistics

Make a list and check it twice: you're going to need movers and other transportation, supplies, a new home, new utilities, a change of address with every system you've ever used, and more! Don't forget tying up loose ends with your apartment, utilities, and other day-to-day life stuff, too.

2. Moving is insanely expensive (and slow, too)...

Movers are expensive, but a rental truck is hugely expensive, too. By the time you account for gas, insurance, and hotel stays along the way, you're much better going with professional movers. Save money by not having them transport anything that you'll just throw away when you get there (it's easier said than done, though). And be prepared for your stuff to take basically forever to get across the country — ours is taking a cool three weeks.

3. ...But some extra moving costs are totally worth it

While you're hiring movers, pay them to pack for you too. They charge for this by the hour at a surprisingly low rate, and they finish the job so much faster than you ever would (think hours, not days). Set aside the things you want to hand-carry on your flight, send a box of essentials ahead, tip well, and feel much of your moving stress float away. They won't pack your stuff exactly the way you would have, but that's kind of the point.

4. You're going to waste tons of stuff

The movers typically won't take any open liquids, and these items are so heavy that they're generally not worth shipping. Use up what you can of your fridge, alcohol cabinet, and toiletry items, and try not to think about how much they cost as you pitch the rest in the trash.

5. You're going to replace tons of stuff

Some furniture is too flimsy to move. Chipped discount store plates and scuzzy old mugs... why bother? Remember all those toiletries you trashed? Get excited to re-purchase them as soon as you hit the drugstore on the other end. Even durable goods like your bed are probably not worth taking — we left our two queen-sized beds in New York because they were going to cost a grand to move, each.

6. Everyone will want to hang out

7. Moving your pets is a nightmare, so prepare yourself now

You'd think that stashing two chihuahuas under the seat of a plane for a few hours would be easy enough, but you'd be wrong. Even if your dog is well-behaved enough to sleep through the flight, getting through security holding a pet is a comedy of errors, and you also need to pay for its fare and health certificate from the vet. Good luck finding a place at the airport for it to pee, and taxis that'll let it ride. And fingers crossed your pet's Xanax doesn't wear off the way mine's did, mid-journey.

So now you, your loved ones, and some of your stuff have made it across the country! And you hate it. No worries, moving is totally reversible. I hope it doesn't come to this, and it'll certainly cost you, but your hometown (or adopted hometown) will still be there if and when you're ready to move back.