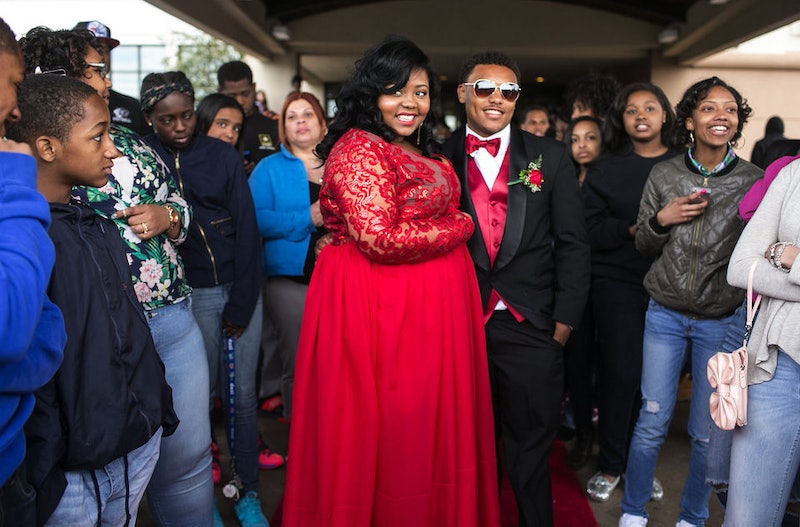 Prom is supposed to be one of the most memorable nights of a teenager's life and it often falls short of those high expectations — and Alexus Miller-Wigfall is a high school student who will not soon be forgetting the night of her prom. That's because her "too revealing" prom dress got her suspended, and Miller-Wigfall's mother Alisha Sneed is suggesting that this happened to her daughter simply because she's plus size. Sneed told PennLive.com, "I don’t see anything wrong with that dress. What do they want her to wear, a turtleneck?"

Miller-Wigfall attended Harrisburg High School's (Harrisburg, PA) prom in a floor-length red gown with a velvet applique-covered bodice and long sleeves with a slight V-neck that her mom made for her — and she looked absolutely gorgeous in it. However, school officials decided that it was too racy for their tastes and that it violated the school's dress code for prom that mandated "breasts, upper thighs, crotch, buttocks, etc.” be covered for the event. Miller-Wigfall was reportedly the only student who was suspended for her prom dress, and eventually the school did overturn the decision to suspend her. They did, however, make somewhat of a garbage and shame-y statement:

"The Harrisburg School District believes that proms are celebratory and memorable events in the lives of its students. Our administration, school board, faculty, and advisors strive to ensure that students enjoy themselves immensely, while abiding by attire guidelines and expectations that support and promote the elegance of the prom season."

The story on PennLive.com mentions that the school has a process for having dresses vetted and approved before prom, so that the administration can decide whether something meets the dress code or not. The idea of adults looking at a teenage girl in an outfit and deciding if it's "elegant" enough makes me feel a little ill. The practice speaks massively to the sexualization of teenager's bodies and the lack of bodily autonomy that they have. If the school wanted to fight the sexualization of young women, perhaps they should look at society and collaborate with organizations like SPARK that are working to change the culture, instead of making girls feel guilty — as though their bodies are something they need to be ashamed of.

As a kid, I was sent home from school for wearing a shirt that was "too low-cut" when I was in the seventh grade. My mom had actually picked it out for me herself and thought it was appropriate. My vice-principal, who was a guy, looked at a 13-year-old and thought, "Her breasts are too distracting." First of all, ew. Second of all, the idea that my body was somehow bad or that I was responsible for the thoughts and feelings of my male classmates (how heteronormative!) was a huge burden to bear as a young adolescent. I was made to feel guilt over a top that I liked and made me feel cute!

This messaging is perpetuated in dress codes the world over and it's about time that we let kids be kids and wear what feels right for them. There is absolutely nothing inherently sexual about the body of a child — that is, until adults start imposing that value on them. I'd love to see less messaging about "dressing appropriately" and more messaging about not seeing girls as sexual objects. Who really needs to be held responsible here?

More like this
Ed Hardy-Inspired Cross Nail Designs Are Majorly Trending
By Danielle Sinay
Kourtney & Travis Crashed His Daughter’s TikTok Live In Their 2nd Wedding Outfits
By Grace Wehniainen
Half Magic Beauty Is Here With The Euphoria Makeup Of Your Dreams
By Rachel Lapidos
When Was 'Bling Empire' Season 2 Filmed?
By Alyssa Lapid
Get Even More From Bustle — Sign Up For The Newsletter