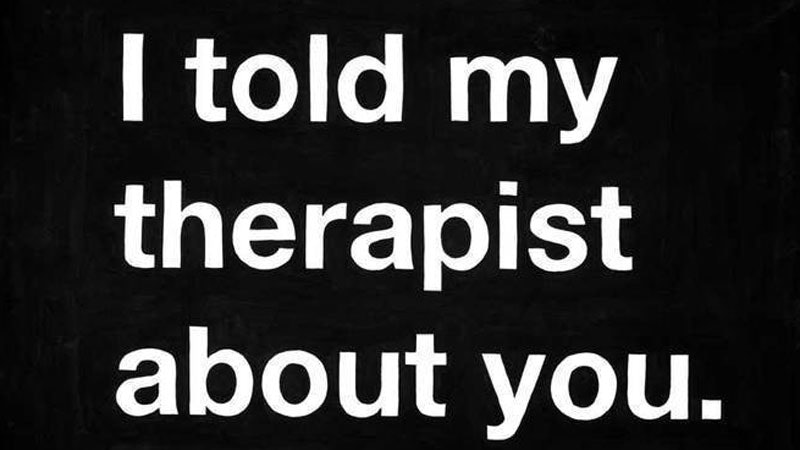 If you've ever been in therapy, you've probably found yourself sitting on the couch and staring at that mysterious person across from you. Your therapist — master of blank expressions, concerned nods, sympathetic clucks or mhmms: this is the person who potentially knows more about you than your closest friends. Or maybe your therapist isn't a mystery: maybe he or she seems like someone you would totally hang out with in another situation — one in which he or she isn't busy diagnosing your every syllable.

If you've ever wondered just what was going through your therapist's head, check out Tanya Byron's latest book, The Skeleton Cupboard: The Making of a Clinical Psychologist — and prepare to be a little shocked. Byron is a superstar British clinical psychologist, a frequent contributor to The Times (U.K.), who has appeared on countless TV and radio programs.

But her status doesn't keep Byron from remembering her roots. In The Skeleton Cupboard, Byron writes about a time, in her early 20s, when she was training, doing six-month-long placements working with everyone from teenage anorectics to middle-aged sociopaths to elderly dementia patients. Instead of just dishing about her patients, though, (Byron notes that the "people" she writes about are, actually, composites), Byron also interrogates her own growth as a therapist, "revealing [her] own doubts and adequacies" to " [break] down the false barriers ... between the 'well' and the 'sick.'"

In other words, Byron lets readers into her head. Here are seven things you might be surprised your therapist could be thinking about, too!

"Why on earth had I thought I could do this?" Byron wondered, early in her training. Sometimes therapists get overwhelmed and question their choice of profession. On her first placement, Byron recalls realizing that she wasn't just seeing patients: "they were people, real people, with lives and stories — vulnerable, sometimes deeply unhappy, interesting people." Therapists are humbled by their ability to touch real peoples' lives, and they're totally aware of the responsibilities therein.

"She remained with me — I sometimes dreamed about her," writes Bryon of Imogen, a 12-year-old girl. Suicidal after the death of her little sister, Imogen slowly learns to trust Byron — and to heal. But after Byron is moved to her next placement, she still thinks about the young girl. Your therapist might be thinking of those who've sat on their couch in the past, too, but it doesn't mean you, the person sitting in front of her now, is any less important.

Their Anxieties and Inadequacies

And some of those are prompted by you — just not in ways you might expect. Byron writes about Martin and Elise, a couple in therapy for psychosexual issues, and remembers how even learning about the couples' age sent her inward: "They've got seven years on me." Your therapist might feel old — or young — compared to you. She might even impressed by your résumé and degrees, just like Byron felt. Therapists struggle with feeling like they're comparing themselves, too!

"They make me feel homicidal," Byron confesses, referring to people who eat while they're on the phone. Remember: Your therapist is a person, complete with peeves and passions, too!

Something — or Someone — From Last Night

Face it: Your therapist has a life outside the office. And that life might include going to restaurants, parties, bars, and nightclubs. Even if you never run into your therapist in the real world (I saw mine while we were both checking out at Whole Foods, and it was both completely awkward and totally normal), chances are the events of the prior night cross their minds while they're in session. Byron recalls one night when she went out some friends to Heaven, a gay bar, only to wind up dancing with a blond pixie and catching her supervisor canoodling with a mutual colleague. Fortunately, even if your therapist is out on the town, odds are they're responsible, like Byron, who called it an early night: her patients "took precedence over ... Heaven."

...and how they can move past them. Byron finds herself critiquing aspects of her colleagues, her supervisors, and her patients — against her will. "I didn't like this part of me that was so quick to judge," she reflects. Even your therapist is judging, though, rest assured that they're probably actively working to check that behavior.

How They Can Help YOU

And especially how they can help you help yourself. For as much as Byron cares about her patients, she learns to set aside her "rescue fantasies," those... well, fantasies young therapists have of saving their patients. Instead, what she loves about her profession is how "clinical psychologists ... create a formulation — to assess carefully and understand the narrative, the story, behind the presenting problems." Your therapist is looking at what you're presenting with your words and your symptoms in order to "look at why [those symptoms] existed in the first place. By understand the 'why,' [therapists] ... enable [their] patients to create a healthier narrative."

More like this
Yomi Adegoke On The Offline Diaries & The Power Of Representation
By Jessica Morgan
The 20 Best Audiobooks To Fall Asleep To
By Aoife Hanna and K.W. Colyard
15 Ways To Tell Someone Was Just Talking Behind Your Back
By Carolyn Steber
Conversations With Friends' Endometriosis Scenes Are As Brutal As It Gets
By Ivana Rihter
Get Even More From Bustle — Sign Up For The Newsletter