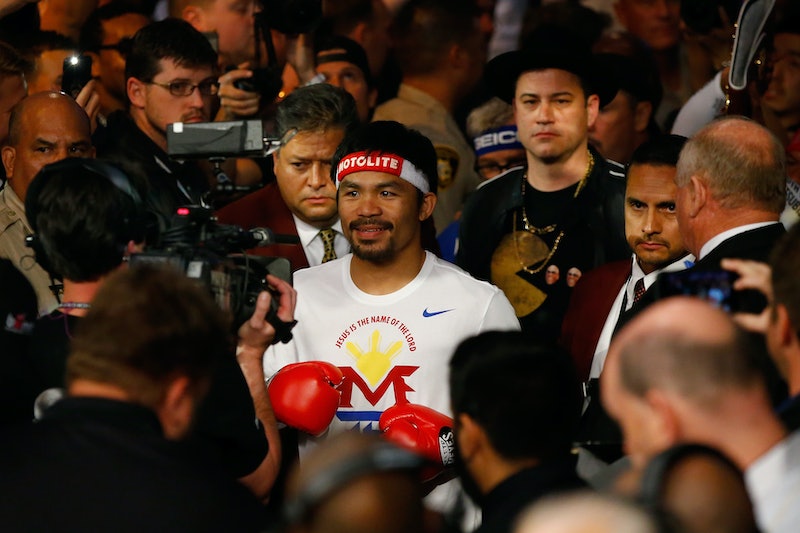 The lead up to the Floyd Mayweather Jr. vs. Manny Paquiao boxing match was much more interesting than the actual fight itself. The event, often dubbed the "Fight of the Century," crashed Pay-Per-View, Jamie Foxx didn't do so well singing the national anthem, and both boxers' entourages had some interesting appearances. Jimmy Kimmel Live host Jimmy Kimmel was spotted in Pacquiao's entourage, while Mayweather's included Justin Bieber and Burger King. Yes, the actual giant plastic-headed fast food mascot of your nightmares was at the MGM Grand in Las Vegas on Saturday night for a boxing match. While Mayweather may have triumphed in the fight, both entourages won when it came to Twitter jokes, praise, and WTF reactions.

What does this all mean? Well, Biebs and Mayweather have been longtime friends, and Mayweather's daughter is a huge Bieber fan. As for Kimmel, the late-night talk show host had asked to be in Pacquiao's entourage when the Filipino boxer was a guest on his show in April. Kimmel proudly marched out to Pacquiao's entrance song (which the boxer recorded himself) wearing gold chains and a Pac-Man shirt — but this Pac-Man is eating Mayweather heads. For those who don't know, "Pac-Man" is one of Pacquiao's many nicknames.

As for the actual Burger King being part of Team Mayweather, I have no clue. Is it an endorsement deal? Does Floyd (or his daughter) really love Whoppers? Is the scary king just showing up to places to creep us out? It's a big mystery for now, but Twitter has some ideas — and just plain OMG reactions.

More like this
Selena Gomez Reacts To TikTok Users Who Say She Shaded Hailey Bieber
By Grace Wehniainen
Jake Daniels Just Became The UK’s First Active Football Player To Come Out As Gay Since 1990
By Sam Ramsden
What Is Jeanie Buss' Net Worth? The Lakers President Is Uber Rich
By Hugh McIntyre
Halsey Calls Out Label For Asking Them To "Fake A TikTok Moment" For New Song
By Jake Viswanath
Get Even More From Bustle — Sign Up For The Newsletter