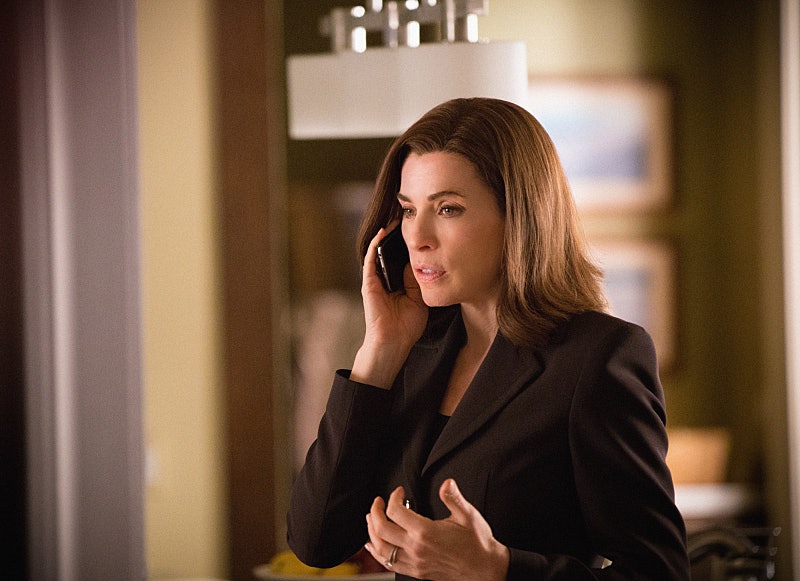 You know what they say: "You can take the lawyer out of the courtroom, but you can't take the courtroom out of the lawyer." (That's a thing people say, right? If it isn't, it should be!) On Sunday night's new episode of The Good Wife , "Don't Fail," Alicia Florrick tried her first case since the state's attorney election scandal, and although her perspective on the law has changed quite a bit since her early days at Lockhart/Gardner, she still loves being a lawyer. She loves it so much, in fact, she's thinking of starting her own firm... again. Only this time, she wants Finn Polmar to join her. That's right, next season, Alicia and Finn might finally be working together! This is a dream come true for Finlicia fans everywhere. I hope he says yes.

Here's why an Alicia/Finn partnership would be a good thing for the The Good Wife:

For starters, actors Julianna Margulies and Matthew Goode have wonderful chemistry together, so it would be great to see them interact more often on the show. Further, the partnership would allow for some potentially interesting "will-they-or-won't-they" relationship drama. I realize that "will-they-or-won't-they" teasing can quickly become exhausting if it's not handled properly, but I feel as though the show's been missing a substantial (and compelling) romantic element lately — and this could be just the thing!

Finally (and perhaps most importantly), the partnership would put Alicia back in the courtroom full-time — and that sounds perfect to me. I've never been fully "on board" with the writers' decision to spend the majority of Season 6 on the campaign trail. I've missed watching Alicia take down her opponents in the courtroom. It's her calling! I think putting the focus back on Alicia in the courtroom would be a really smart move for the series going forward. We'll just have to wait and see what happens.

In the preview for next week's Season 6 finale, "Wanna Partner?," CBS teased that someone surprising is going to show up on Alicia's doorstep. Who could it be? Ramona Lytton? Lemond Bishop? Kalinda?? I don't know, but I'm pretty anxious to find out.