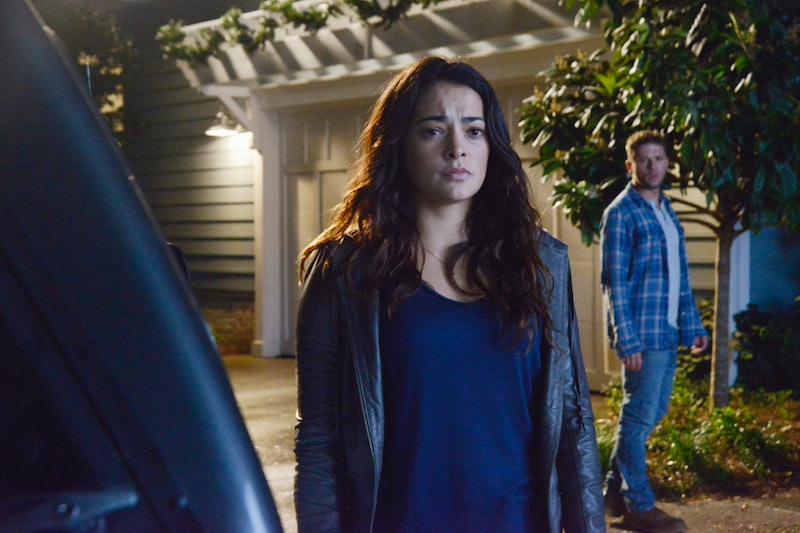 And there you have it folks. On Sunday night's Season 1 finale of ABC's Secrets & Lies , Tom's killer was finally revealed. Much like the original Australian version of the series before it, Secrets & Lies chose to reveal Tom's killer as Ben's younger daughter Abby (Eva from the original series). And while the reason behind Abby killing Tom remains the same in this adaptation, the fallout is different and gives Ben quite the lasting punishment both physically and emotionally. But as tragic an ending as the American version is, to be honest I totally understand why the writers chose it over the original.

The setup for the murder started the same as the Australian version. Abby was missing, Ben accused Jess of kidnapping her, and Jess accused Ben of sexual assault. Thankfully when the episode — smartly entitled "The Lie" — began, Abby was found and Ben was cleared by Cornell of any charges, including the murder of Tom. Here things took a turn away from the original adaptation in quite heartbreaking ways. Ben gleefully returned home a free man and Christy brought over the kids to celebrate New Year's with him. Unfortunately when Ben started clearing away his ladder in the yard, he found a pair of Abby's bloody sneakers underneath the guest house. And Abby finally revealed what happened.

She tearfully stated the details of the night Tom died. Abby had heard Christy and Ben fighting over Jess and the affair and told her parents that she wanted to help Tom run away to bring Scott back, because according to Abby when a child runs away, the parents always come back to find the kid. While running into the woods, Tom started getting cold feet about Abby's plan and decided to run away. That's when Abby accidentally hit him with the flashlight, and Tom fell down dead.

As the family listened in horror to Abby's confession and planned out what to do next, Natalie couldn't handle her parents' even considering to protect Abby from the police. Ben and Christy decided to get Abby out of town and away from Detective Cornell while Natalie demanded to stay behind. Ben, after having a tragic conversation with Christy over where they went wrong with Abby, decided to do the honorable thing and confess to Tom's murder to Cornell. Cornell however, knew more than Ben could have ever imagined.

Cornell revealed to Ben during his confession that Tom was struck six times when murdered and that she knew Abby was the one who did it. After realizing what this new information meant about Abby's confession — it basically proved the same thing about her as the original series: She was a cold-blooded killer — he still went through with the confession and was arrested. Cornell couldn't handle Ben's decision, especially since she tried to level with him and relate to him when she admitted how hard it was for her to arrest her own daughter. But in the end, she couldn't let it go. She ended the episode stating that she would put Abby away.

Abby on the other hand was far away with her mother during their escape and finally revealed the truth with one blood-curdling line that the series smartly reused from the original Australian series: "None of this would have happened if I had just gotten Tom to the river." Will Abby ever get caught as she did in the original series? It all depends on whether or not the show gets renewed. So why end it with Abby free and Ben incarcerated rather than Abby coldly confessing to Cornell as in the original? Both endings make sense and are extremely dark and upsetting. But Sunday night's season finale allows Ben to attempt to redeem himself in the eyes of a family he believes he ruined, despite knowingly allowing his daughter to roam free and potentially kill again. It might not be satisfying, but real life doesn't always get closure.