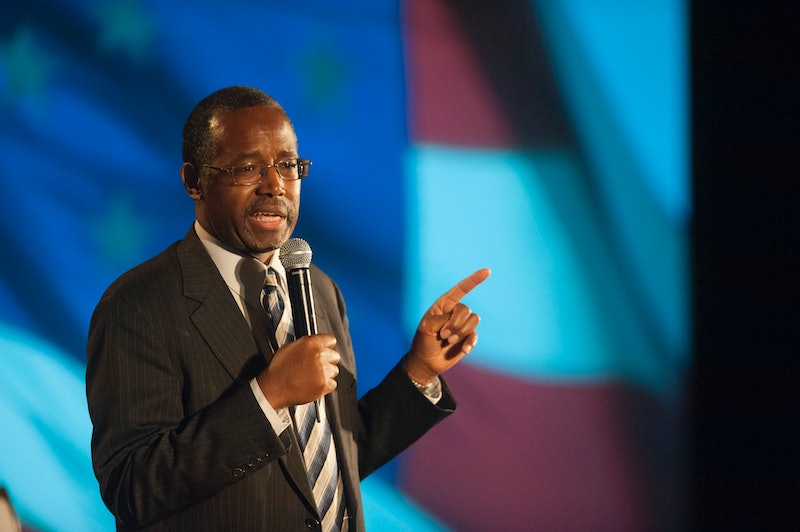 When a Republican doctor runs for president, do you get a candidate more or less in favor of a woman's right to choose? On Monday, neurosurgeon Ben Carson announced that he's running for president at Detroit Music Hall, bringing with him a host of positions that have supporters applauding him as the embodiment of true conservative values and GOP analysts, um, concerned. In addition to calling Obama a "psychopath" and referring to the Affordable Care Act as the worst thing to befall the U.S. since slavery, Carson has expressed his pro-life stance on abortion in pretty extreme terms that might not fly with most of the electorate.

Dr. Carson, who has never run for political office before, rose to fame in 1987 when he performed the first successful separation of twins conjoined at the head. His bestselling autobiography, Gifted Hands, once made him a role model for young African Americans, but his 2013 speech at the National Prayer Breakfast denouncing a tax system that punishes the wealthy put him on the political map. Since then, he has made controversial statements on a number of issues, from gay marriage to the Affordable Care Act to abortion.

On the subject of abortion specifically, Carson told Glenn Beck in 2014, "I totally believe that it’s murder." In an interview with Dove TV, also last year, Carson likened terminating a pregnancy to human sacrifice. "It's interesting that we sit around and call other ancient civilizations 'heathen' because of human sacrifice, but aren't we actually guilty of the same thing?" he said.

Carson says his professional experience is the basis of his opposition to abortion:

As someone who has spent a lifetime trying to save the lives of children, even with intrauterine surgery, it is probably not difficult to imagine why I am extremely oriented toward efforts to preserve human life, especially innocent human life that has yet to experience the extrauterine world.

Underscoring his belief that it is the government's role to prohibit abortion, Carson has compared pro-life advocates to abolitionists, writing on his website, "If abolitionists had taken a similar hands-off approach, I might not have been free to write this column" and telling Everyday Matters magazine:

There are a lot of people who say, “I agree with you. I think that it is wrong, and I would never have an abortion; but I don’t feel that I have the right to impose my feelings on other people.” That may be the response of many people, but suppose the abolitionists had felt that way back in the 18th and 19th centuries. Suppose they had said, “I’m not going to own any slaves. I really think that slavery is wrong, but if you want to own slaves…that’s fine.” If the abolitionists had had that attitude, where would we be now?

Carson has also suggested that men and women seek abortions out of "convenience" and that the fact that abortion is legal in the U.S. means American values endangered species more than human beings. In a 2014 opinion piece in The Washington Times, he wrote:

Many of us turn a blind eye to the wanton slaughter of millions of helpless human babies who are much more sophisticated than some of the other creatures, when nothing is at stake other than the convenience of one or both parents. I am not saying that we should abandon our efforts to save baby seals and a host of other animals. Rather I am saying shouldn't we consider adding human fetuses and babies to the list?

Mostly absent from all of these statements is any reference to the women facing unwanted pregnancies and their experiences or rights. It's not clear whether Carson thinks abortion should be legal in the case of rape or incest.

It remains to be seen whether Carson will use similarly inflammatory rhetoric now that he's officially on the campaign trail. Will he continue drawing parallels between abortion and slavery to gin up Tea Party support or take a more subdued approach with the goal of appealing to a broader GOP base? Even if it's the latter, "human sacrifice" isn't a phrase anyone's going to forget anytime soon.