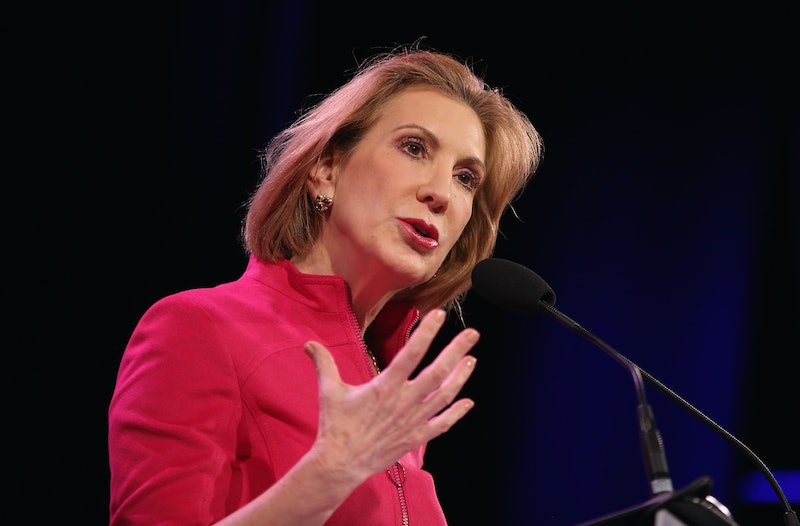 Former Hewlett-Packard leader Carly Fiorina officially announced her 2016 presidential campaign Monday morning on Good Morning America, saying, "Yes, I am running for president." The business executive is the first woman to enter the primary race for the 2016 GOP presidential nomination — so of course, there was a swipe or two at Democratic candidate Hillary Clinton's track record.

"[Hillary Clinton] is clearly not trustworthy, she has not been transparent about a whole set of things that matter," Fiorina told ABC News' George Stephanopoulos. "She hasn't been transparent about her server and her emails, and now we see all these foreign donations to Clinton Global Initiative at the time when she was secretary of state."

However, Fiorina did say that she had great admiration for Clinton, calling her "highly intelligent" and "empathetic." But enough about Clinton — let's focus on Fiorina, the 60-year-old former Silicon Valley executive who has never held public office but believes she is a strong candidate for the U.S. presidency.

The night before Fiorina's official announcement, she tweeted that she would be joining Good Morning America on Monday morning to "discuss some big news." Fiorina is also scheduled to sit down with Katie Couric at Yahoo! News Monday afternoon.

Under the "Meet Carly" tab, Fiorina explains her "uniquely American" story of starting as a secretary and ending as the CEO of HP, a position she held from 1999 to 2005. Fiorina was the first woman to become CEO of a Fortune 50 company.

"Carly started out as a secretary for a small real estate business," her website's "About Me" page states. "She typed, filed paperwork and answered the phone. Eventually she would became a leader in technology, business and charity."

In 2014, Fiorina founded the Unlocking Potential Project, which strives to bring female voters to the Republican Party. She has never held public office, having been defeated by incumbent Sen. Barbara Boxer (D-Calif.) in the 2010 U.S. Senate election.