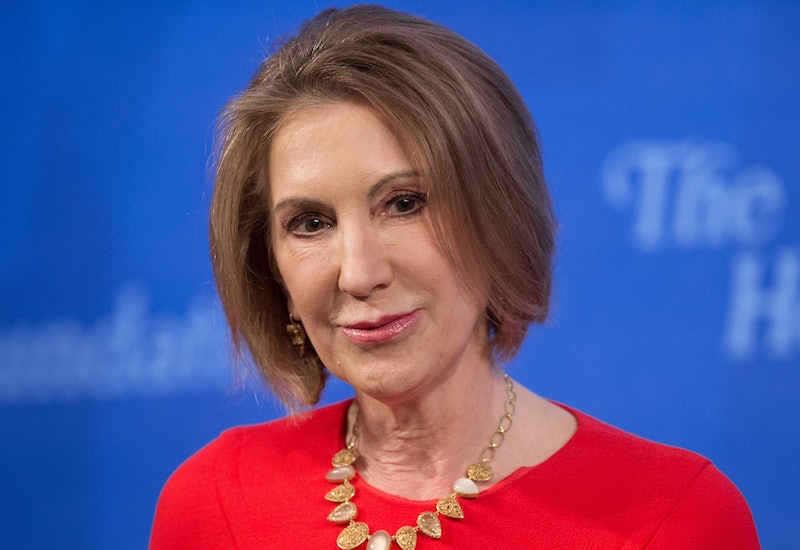 Now that the GOP has its first official female candidate for the 2016 presidential nomination, she is now under our collective gaze. While the media will surely be dissecting Carly Fiorina inside out, let's start with one of the issues that matters the most to women. Many are probably wondering what Carly Fiorina's stance on abortion is, and they won't be disappointed to learn that it's a tough one. Fiorina is so steadfast in her position that she believes most Americans, including Democrats, will be able to find common ground with her.

Fiorina officially announced that she was running for president on Monday morning during an appearance on Good Morning America. The former Hewlett-Packard CEO, who was forced to resign from the company in 2005, has made waves in politics over the last few years. After being a presidential campaign adviser for John McCain in 2008, Fiorina announced her candidacy for the 2010 U.S. Senate election in California. Although she secured numerous endorsements, including one from Sarah Palin, and won the Republican primary, she ultimately lost to Democratic incumbent Barbara Boxer.

During her Senate campaign trail when she was going up against Boxer, who is pro-choice, Fiorina first revealed her fundamental take on abortion: she's against it except in cases of rape, incest, and when the pregnancy threatens the life of the mother. But more recently, she's elaborated on her stance against abortion, this time with a new female pro-choice counterpart.

Her Very Personal Reasons For Opposing It

In an interview with Breitbart News, which was published on Sunday (the day before her announcement), Fiorina outlines a more detailed platform regarding abortion and reveals her very personal history with it. Her early opinion of abortion was formed when she watched her best friend go through the experience.

I accompanied my best friend, because she was having an abortion, and I watched what that did to her. I watched how she was dealt with at that abortion clinic, the fact that she really wasn’t presented with any options…

One of the things that struck me as so sad is, she was never really encouraged to even evaluate that choice. It was sad, because I think she would have been a less tortured woman later, had she thought carefully about the choice that [she was making].

Another person close to her helped shape her position, she added.

When I met my husband, I learned that his mother had been told to abort him … she was a woman of great courage and faith, who, despite the advice of her doctors, she went ahead and brought her son into the world, and while she spent a year in the hospital following his birth, he was the joy of her life and he is the rock of mine. And I’ve thought a lot about how different my life would be if she had made a different choice.

She Says Most Americans Would Agree With Her Stance

Fiorina explained to Breitbart News how, even though many view her pro-life conservative principles as extreme, she was able to find common ground with Democratic voters.

I won a lot of Democratic and Independent votes because even on a very emotional issue like abortion, when I talk it through with women — who may not agree with me — we managed to find common ground on issues like late-term abortion or the Pain Capable Unborn Child Protection Act. [The Democrats’] policy, which I point out to men and women and women all the time, their policy really is what Sen. Barbara Boxer said when I ran against her in 2010: life is a life when it leaves the hospital. And the vast majority of Americans do not agree with that.

Science Is On Her Side

In a February interview with The Christian Post, Fiorina said that, despite popular belief, science actually sides with pro-lifers.

Because life is an important issue that we shouldn't be afraid to talk about. Like I said at that March for Life event, science is on our side. It shows that unborn babies feel pain and dream at five months and that the DNA on the day that we die is the same DNA we had as a zygote. Every human life is precious and has potential.

She Sums Up And Condemns The Democratic Stance

At a gala hosted by anti-abortion group Susan B. Anthony List last month, Fiorina summed up the Democrats' stance on abortion as follows:

Any abortion, any time, at any point in a woman’s pregnancy for any reason to be paid for by taxpayers and now, some would like to add, to be performed by a non-doctor.

Fiorina condemned this platform while reiterating a jab at her former political opponent:

A policy succinctly summarized by Barbara Boxer as, "It’s not a life until it leaves the hospital." How do you feel about this? Women are horrified by that.

She also took a swipe at liberals in general, calling them hypocrites at the Iowa Freedom Summit in January.

It is on the issue of life that the hypocrisy of liberals is at its most breathtaking. ... Liberals believe that flies are worth protecting, but that the life of an unborn child is not.

She's Also Been Disappointed By Her Own Party

Fiorina spoke out against House Republicans after they backed down on voting for the Pain Capable Unborn Child Protection Act, which would have banned abortion after 20 weeks of pregnancy. In a statement to The Hill, Fiorina said: