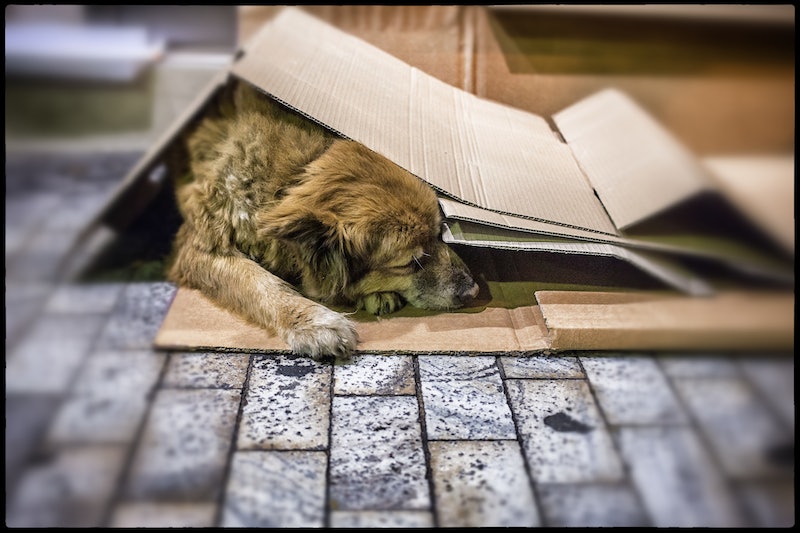 You've probably never wondered what it's like to spend the day in the shoes, or more correctly, paws, of a stray animal. Why would you? Humans have enough crap to worry about when it comes to themselves and other people than to also have to empathize with strays. So if you've never thought about how homeless animals spend their days roaming the streets, this video, #AStreetDog'sLife, was created by World For All and films a a day in the life of a stray dog in India. It will open your eyes. It's ROUGH out there. It's no Homeward Bound, that's for sure. Between being shown nothing but cruelty by humans, dodging traffic and eating trash, everything about this dog's day is heartbreaking.

The whole video is shot from the perspective of the dog (I assume there's a GoPro attached to the dog's collar), and it's a somber look at stray life. There are apparently 250,000 such strays on the streets of Mumbai, so multiply this video by that number and you've got yourself an animal welfare crisis. World For All urges us to adopt strays, and even though we might not be receiving this message in Mumbai, it's just as pertinent to wherever in the world we are. New York, for instance, kills impounded strays if they're not quickly adopted. So if you're looking for a new animal friend, think about a rescue, because your forever friend could be out there on the street right now, having a day like this:

Navigating the gauntlet of rushing cars on the road

Being hurt by cruel humans

Scavenging for food in garbage

Watch the heartbreaking ordeal below:

You're probably moved to action by now, so find out what you can do to help the strays of Mumbai at World For All's website, or a otherwise a quick Google search will let you know what you can do locally within your own community to help the animals around you.