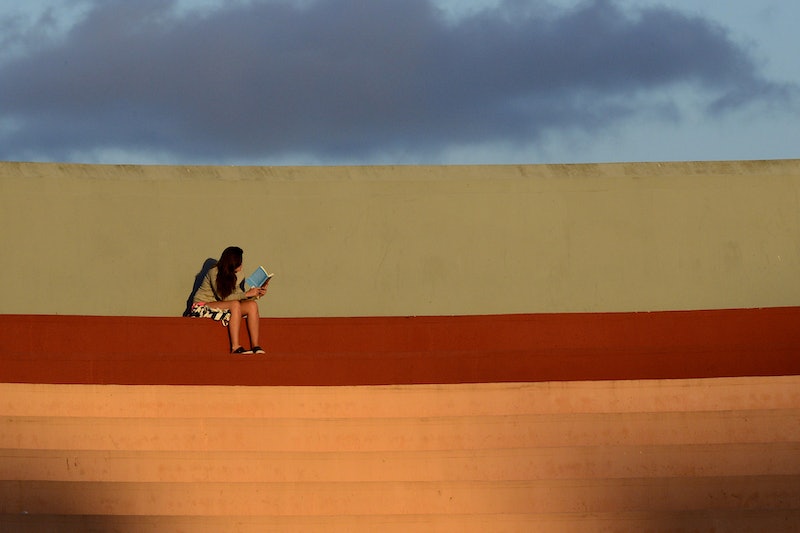 "Challenger Deep is by no means a work of fiction," author Neal Shusterman says in the author's notes of his latest YA novel. Challenger Deep (HarperCollins) is a uniquely moving story, as it's rooted in Shusterman's own experience with his son Brendan, who was diagnosed with schizophrenia when he was only 16. As Mental Health Awareness month begins, Challenger Deep is a powerful read to delve into what it's like to live with schizophrenia, especially as 12 pieces of artwork in the book were done by Brendan himself, as he was experiencing schizophrenic episodes. Selections of these evocative drawings are interspersed throughout this piece.

The novel follows Caden Bosch, who like Brendan, is descending into a serious mental health condition. It alternates back and forth between pieces of the story based in reality and the world Caden lives in his head, which intertwine in a way that will leave you breathless. Caden sees himself on a ship headed for the deepest point on Earth, the southern part of the Marianas Trench, aka Challenger Deep. He travels along with the Captain, a parrot, a girl named Calliope and others, who all fall in line with people in his "real" life. While on the ship, he's appointed the artist in residence, and he draws what sees along the journey.

Meanwhile, Caden's family and friends start to notice major changes in his behavior and state of mind, bringing them to admit him to a mental hospital for treatment. Shusterman notes just how real Caden's experiences are:

The places that Caden goes are all too real. We faced many of the same thing Caden and his family did. I watched as someone I love journeyed to the deep, and I felt powerless to stop the descent. ... With the help of my son, I've tried to capture what the descent was like. The impressions of the hospital, and the sense of fear, paranoia, mania, and depression are real, as well as the "Jell-O" feeling and numbness the meds can give you.

It may not be a coincidence that Caden's last name is Bosch, the same surname of the artist Hieronymus Bosch who is famous for his fantastic imagery that depicts moral concepts, as well as his hellish landscapes.

Brendan is now 26, and with the help of his family, he has his schizophrenia under control and is able to live a "normal" life. Though, it's important to remember that with many mental illnesses, the disease will never be fully cured.

It's clear the Shusterman wrote Challenger Deep from a place of deep love, as a testament to his son's strength and to show that there is hope even when things get really dark. It's this love that elevates the novel to new heights, in a way I haven't seen often in young adult literature, or in adult fiction for that matter.

Mental Health Awareness Month is about spreading the word and reducing the stigma around mental illness. I can't think of a more appropriate book than Shusterman's captivating, challenging, darkly funny Challenger Deep to help accomplish that goal, spreading empathy for anyone suffering with a mental health condition.