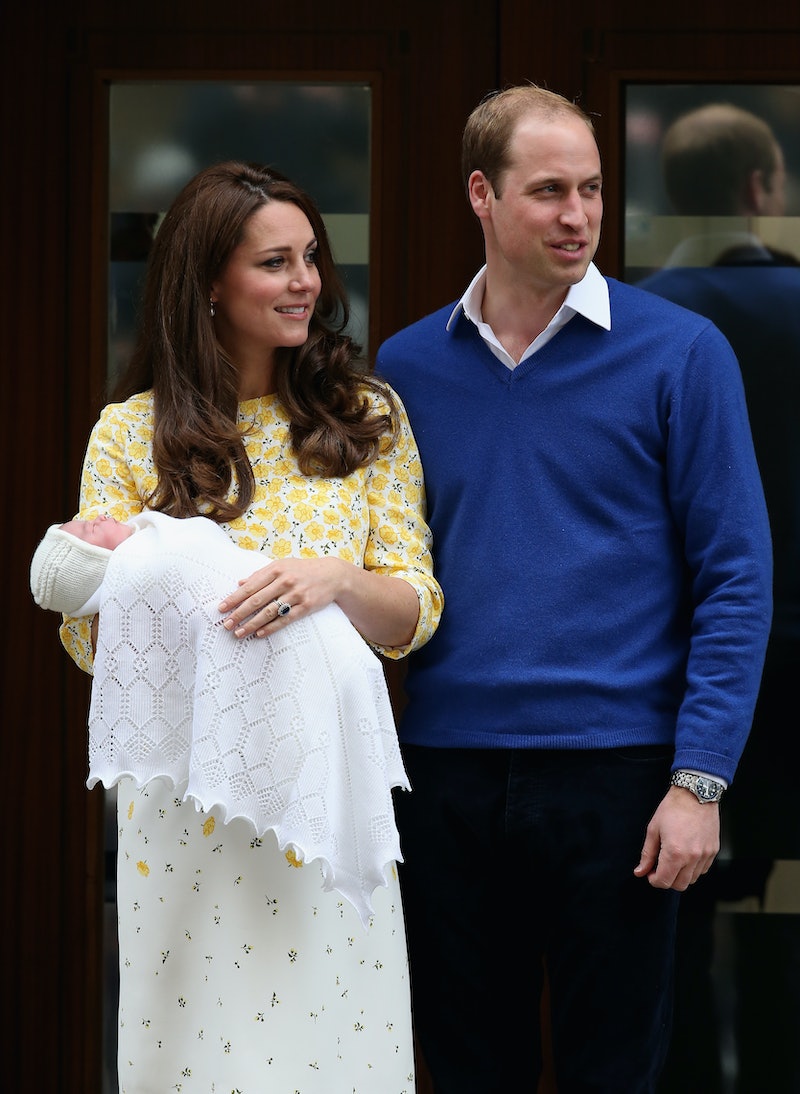 Congratulations to the lucky folks who put their money on the royal baby name that won! On Monday, Kate Middleton and Prince William announced the new royal baby's name: Charlotte Elizabeth Diana. Why did Prince William and Kate Middleton choose this royal baby name? The two middle names are pretty obviously shout-outs to William's mother, Diana of Wales, and grandmother, Queen Elizabeth II, but how 'bout that first name? Is Kate a big Sex and the City fan or something?

I would wager that Middleton probably doesn't care too much about American television, and that this choice has more to do with tradition than anything. To quickly recap the events of this weekend, Middleton gave birth to a healthy little princess on Saturday morning at St. Mary's Hospital in London. Even before the birth, serious Anglophiles had been betting on the regal infant's name. Charlotte and Alice were the front-runners, and Diana was also included in some of the speculation. Overwhelmed with all the options of all the royals to say "sup" to with their child's name, the pair opted for the compromise of: Charlotte Elizabeth Diana.

In the annals of royal family baby names, Charlotte has a long regal history. Specifically, the name has been tied to kings named George. King George IV's only child was named Charlotte, and George III's Queen was also named Charlotte. Having named their first child George, it's possible that Will and Kate wanted to stick with the theme.

It's also possible that the pair decided to name the new princess Charlotte as an homage to William's father Prince Charles. And on top of that, to Middleton's sister, Pippa, whose middle name is Charlotte. Either way — or perhaps, both ways — it'd be such a nice gesture!

Additionally, I would say that Charlotte is a particularly sweet name for a baby/toddler. After all, they can give her a cute nickname like "Char" and there's a children's story with her name in it. But lucky for Charlotte, she dodged the bullet of having to go through life with a Disney princess name — speaking from experience, it's no barrel of monkeys.

More like this
Is Megan Fox Pregnant? MGK Gave A Shout-Out To Their “Unborn Child” Onstage
By Hugh McIntyre
Kelly Osbourne Found Love In Her Best Friend & Now They're Expecting
By Vivian Iroanya and Rachel Mantock
Sasha Lane’s Greatest Love Of All Is Her Daughter
By Sophie McEvoy
20 Celebrity Couples Who You Forgot Dated In 2002
By Jake Viswanath
Get Even More From Bustle — Sign Up For The Newsletter