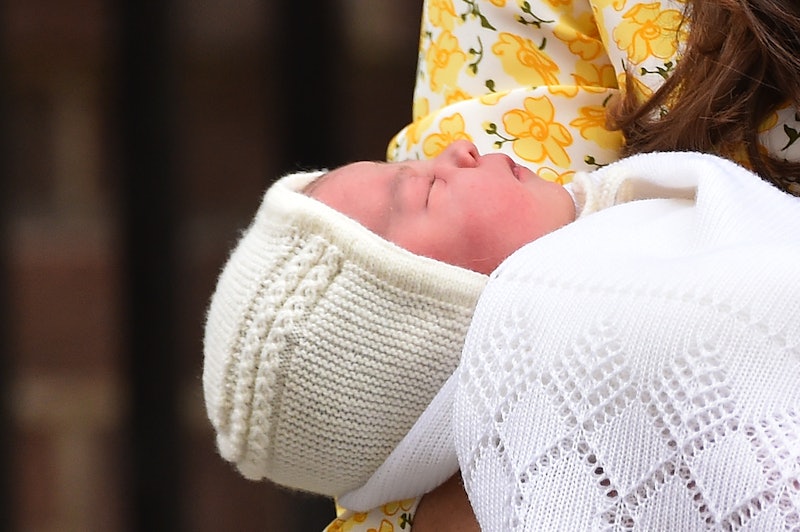 On Saturday, May 2, Kate Middleton and Prince William welcomed their second bundle of joy, a beautiful, healthy and then-unnamed princess. Over the weekend, people all over the world continuing betting on what the name of royal baby #2 would be, and it has now been revealed that her full name is Her Royal Highness Princess Charlotte Elizabeth Diana. Quite a mouthful for a three-day-old, eh? Many betting sites such as Ladbroke's and Paddy Power were favoring Alice, Charlotte, and Elizabeth, so many people were actually very near the mark!

We knew to expect that Middleton and Prince William couldn't veer too far from tradition and give their daughter a super trendy name considering she is now in line for the throne, and you have to "proper" and all that. I don't know if the Queen would approve of a Princess Kaylee, for instance. But Princess Charlotte's traditional name is quite lovely and, as was the case, with Prince George, there is a lot of connection to past monarchs and beloved members of Middleton and William's family in this name. So, I decided to decode the meaning behind Princess Charlotte Elizabeth Diana's new names, and here's what I found.

I like to think Kate Middleton is a huge Sex and the City fan, so obviously she named the princess in tribute to Charlotte York. That is probably not true. But Charlotte seems to hold a lot of significance for the couple and is tied to many family members who are near and dear to both of them. The name has historical significance and is also a version of Charles, so it could have been chosen partially in honor of William's father Prince Charles. Yahoo! Parenting also reports that it's a version of Carole, the name of Middleton's mother. Another cute nod is that Middleton's sister Pippa Middleton's middle name is Charlotte.

The name Charles has its roots in the French and German languages, and means "free man" and "warrior" and the Charlotte means "petite" and "feminine," which I think all togetehr totally bodes well for this already powerful little girl.

Elizabeth is obviously a tribute to Prince William's grandma and Charlotte's great-grandmother, who is the current reigning monarch. Also, Elizabeth is Kate Middleton's middle name. The name Elizabeth has its roots in Hebrew ("Elisheva") and means "pledged to God." As well as the variations, "my God is an oath" or "my God is abundance." Clearly, Elizabeth is a name full of religious significance.

Personally, I didn't expect the name to include a tribute to Prince William's mother, the late Princess Diana. During the last few years of her life, Diana had quite the rocky relationship with the royal family, but she loved her boys until the end. This beautiful commemoration of William's beloved mother pretty much proves that Middleton and William had some control in naming their child, even though her other names are traditional.

As for meaning, Diana was a Roman goddess of the moon, hunting, forests, and childbirth, and is represented as both beautiful and chaste. The name Diana comes from a Latin root meaning "heavenly, divine," and I have no doubt Princess Charlotte will share in many of these qualities of her late grandmother.

More like this
Elizabeth Olsen's Chris Evans Friendship Update Was Accidentally Hilarious
By Grace Wehniainen
Elizabeth Olsen’s ‘SNL’ Cameo Made Benedict Cumberbatch A Multiverse Believer
By Grace Wehniainen
This 'Hunger Games' Alum Will Star In A New Medical Drama Titled 'A Mistake'
By Alyssa Lapid
Is Megan Fox Pregnant? MGK Gave A Shout-Out To Their “Unborn Child” Onstage
By Hugh McIntyre
Get Even More From Bustle — Sign Up For The Newsletter