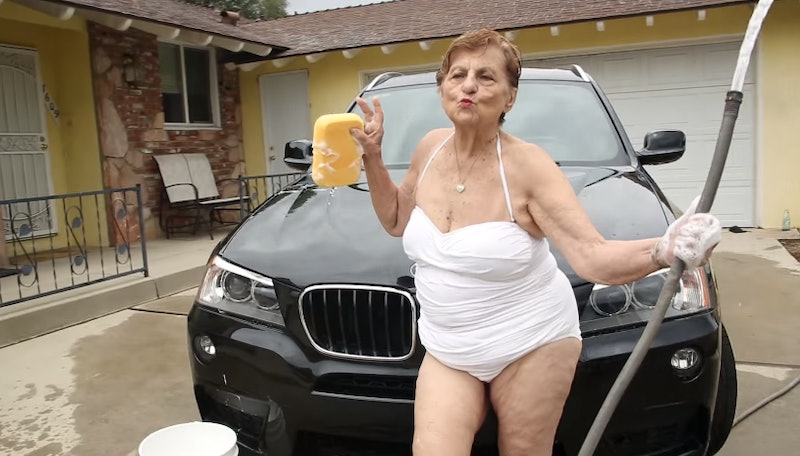 This lady is my new hero. No seriously, forget about empowerment. She's gone beyond and nailed the art of having zero f*cks to give and 200% nonchalance when it comes to being herself and liking what she likes. I can't even say "confidence" because it doesn't seem conscious. She's unapologetic, and blithely "you do you" as if there's literally no other conceivable way that things could be done. I wish everyone was this woman. Mary Bartnicki is an 84-year-old woman who wants to be the next Carl's Jr. model and I am going to go out and start canvasing Carl's Jr. advertising and PR teams to make this dream happen. For her, and for us.

Mary, the woman with more balls and less care than anyone you've ever met, LOVES Carl's Jr., as she saids while hoeing down a burger, it's "better than McDonalds, Burger King, any of that other crap." Mary says she'd love to be Carl's Jr.'s spokesperson, and that if she was, "their sales will go up 100%". I, for one, have never had Carl's Jr. And if Mary was their new spokesmodel, then the first thing I'll be doing is going out and getting myself a burger. Do you hear that, Carl's Jr.?

Carl's Jr. is known for its objectifying commercial imagery, using sexy young women like Kate Upton and Charlotte McKinney in ridiculously provocative scenarios in order to sell their burgers. So Mary went ahead and made a video of her being ridiculously provocative in order to promote herself and her mission, #GetMaryOnCarlsJr. If you ask me, all the Uptons in the world aren't as hot as Mary, and Upton (bless her, because I happen to quite like her), and the Upton-like sexuality used in advertising is starting to get a little predictable and tired. Let's see a new sexy in commercials, starting with Mary. Here are some reasons why Mary deserves to be the new Carl's Jr. model:

(Which is possibly more than can be said for Carl's Jr.'s previous models.)

She knows how to work a swim suit

She knows what she wants and isn't afraid to go for it, which is the ultimate SEXY

Watch Mary's video below and GET BEHIND HER CAMPAIGN, because THIS is the change we need to see in the world: