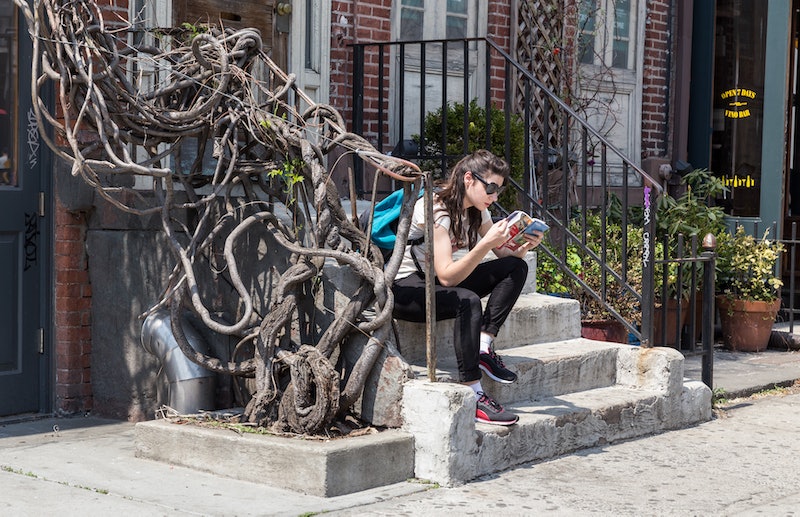 Summertime, and the livin’ is easy. Well, OK, if you’re stuck in New York or a comparably garbage-scented city, the coming muggy days may not feel like the vacation you signed up for then had to cancel for a last-minute meeting armageddon. But that’s what June 2015's best books and summer reading in general is for, right? The office-bound escapist's consolation prize? Mimosas work, too.

Stuck in an Arctically-chilled, overbright office building? Pick up Rebecca Dinerstein’s gorgeous debut novel The Sunlit Night and transport yourself to the eerie land of the midnight sun. California dreaming but blew all your flight money on Whole Foods hauls? Get lost in SoCal’s hippie-dippy 1970s surfer culture in Lisa Glatt’s The Nakeds, which may even inspire you to start your own nudist colony (in the privacy of your own home, of course).

If traveling through time is your idea of a summer escape, go for Jami Attenberg’s Saint Mazie, which will totally transport you to jazz-age New York. And if you’re looking to travel into your own blissfully naïve past, indulge your nostalgia in Judy Blume’s wonderful In the Unlikely Event or Meg Cabot’s Royal Wedding: A Princess Diaries Novel, which catches our beloved, now-25-year-old Princess Mia in the midst of planning a summer wedding.

Even if you can’t physically get away this summer, reading these 13 June titles will whisk you away.

The Sunlit Night is a rare find: it's a literary love story, but for all its nuance, it still has the ability to make you giddy. Frances and Yasha’s stories begin separately in New York — Frances is an art major, freshly graduated from college; and Russian-born, Brighton Beach-bred Yasha has just graduated from high school. Their lives converge, however, at an art colony on the otherworldly Lofoten islands off the coast of Norway. With precision and ease, Dinerstein gives us a love story that’s about so much more than finding love: it’s about finding yourself in the company of another, even when you're far from home.

When 6-year-old Hannah Teller is hit by a car, her leg shatters. So too do the lives of the people implicated in the accident: hers, which for the next decade is dictated by the physical and emotional pain wrought by her destroyed limb; her parents', who divorce and pursue alternate lives (her Jewish father converts to Christianity, and her conservative mother marries a nudist and becomes one herself); and Martin Kettle's, the troubled young man who hit Hannah and fled the scene. Glatt writes with clarity and heart about these four people, but equally compelling is her vivid portrait of Southern California in the 1970s. The Nakeds is as escapist as it is illuminating; as radiantly beautiful as it is painfully, shatteringly real.

In The Unlikely Event by Judy Blume (June 2; Knopf)

You read that right: Judy Blume is back in action. And in In the Unlikely Event, Blume's first adult book since 1998's Summer Sisters, the writer delivers a story as candid and heart-wrenching as her influential YA books. Blume digs deep, hearkening to the time and place of her own childhood — Elizabeth, New Jersey, in the 1950s — to tell the tragic story of the three airplane crashes in 1951/'52 that took 116 lives. Both Blume's lifers and newcomers will appreciate In the Unlikely Event, which respects tragedy without neglecting lightheartedness in that special way only Judy Blume knows how to do.

Mia Thermopolites, rejoice! Meg Cabot’s new Princess Diaries novel is everything you've ever wanted in a new Princess Diaries novel. This first adult installment of the YA series catches up with a now-25-year-old Princess Mia who, since those disastrous pre-teen years, has gotten the whole royal thing down pretty pat. But Mia hasn’t totally abandoned her ugly duckling past — she’s still as earnest and nerdy as ever. And despite Mia’s fame and power, Cabot delivers a pretty accurate depiction of what it’s like to be a city-dwelling twenty-something, especially one thrust unwillingly into the spotlight. Oh, and did I mention that Princess Mia is getting married to none other than MICHAEL MOSCOVITZ? (Didn’t I tell you that Royal Wedding is everything you’ve ever wanted?)

If Jami Attenberg were outed as a psychic medium, I wouldn't be the least bit surprised. Attenberg, author of 2012’s acclaimed The Middlesteins, has an eerie gift for channeling characters’ voices, and translating those echoes into a compelling, evocative narrative. And in Saint Mazie, Attenberg’s gift proves to be crucial: Mazie Phillips, Attenberg’s magnificent title character, was a figure central to New York history. The larger-than-life Phillips was the proprietress of The Venice movie theater on the Bowery, a downtown hotspot which Phillips turned into a safe haven once the Great Depression took hold of the city. Attenberg delivers Mazie’s story with grit and charm, painting an affecting picture of the dirty city streets, and its colorful characters, that Mazie loved more than any of her many suitors.

Second-person narration is tough to pull off — but when a writer is as skilled as Vendela Vida, that experimental form results in a compelling interactive experience (which means it gets kinda creepy). In The Diver's Clothes Lie Empty, Vida's fifth novel, that narration insinuates the reader into a darkly comic adventure story, in which "you" are robbed blind in a hotel in Casablanca. What follows is a wild journey through Morocco, and an interesting take on the surreal experience of literally losing your identity.

Louisa Gornick is a Yale-educated former therapist and NYU-educated MFA holder with has two novels under her belt; and in Louisa Meets Bear, her first short story collection, Gornick puts her brains (and considerable writing chops) on full display. That therapist's compassion and intuition is especially evident in these 10 stories, all of which probe the complex inner workings — and their external consequences — of dynamic women between the 1960s and the early 2000s. Whether it's the pregnant daughter and her distant mother in "Instructions to Participant," or that same adopted child traveling through Italy with her parents in "Misto," you'll find a kindred soul with whom you can connect in Louisa Meets Bear. You might even get an inadvertent shrink session out of it.

If all you know of the wild world of footnotes is David Foster Wallace and Nicholson Baker, your literary software is due for an upgrade. Unlike her uber-brainy forbears, in The Sunken Cathedral Kate Walbert uses the device in place of a poetic whisper, incorporating these asides fluidly into her gorgeous prose. In this fourth novel, the acclaimed Walbert explores the inner lives of two Chelsea-dwelling widows, both of whom fled Europe during World War II and now face a rapidly-changing climate (both culturally and literally). Walbert writes unlike anyone I've read before, imbuing each of her finely-tuned sentences with stunning detail. Trust me: You won't ever have been more eager to read the footnotes in your life.

After a decade of relationships failing spectacularly 'round the globe, an anchorless Ingrid returns to the California grape farm — and the complicated family — she'd once called home. The best homecoming stories, like an expertly crafted wine, are often juicy, but subtly complex, their bitterness and bite tempered by a prevailing sweetness. And that's just what Taylor offers in Valley Fever, in which the writer lavishes the same remarkable care on rendering her nuanced characters as those characters do on the crop that is their livelihood.

Etgar Keret is the kind of person who can strike up a conversation with a total stranger (his cab driver, his plane seat neighbor, his waiter at a tiny cafe in Zagreb) and magically get her to share her most interesting, most intimate secrets — and then fine-tune those secrets into compelling little ditties which he will then turn into a bestselling book. In The Seven Good Years, the brilliant Israeli writer's first memoir, Keret directs that shimmering extrovert's energy onto himself, sharing the "seven good years" between the birth of his son and the death of his father. You'll be utterly charmed and totally floored by Keret's easy prose, his philosopher's eye, and his wide open heart, and you'll pray that the next stranger who attempts to talk to you at the supermarket is someone as interesting as he.

In the Country: Stories by Mia Alvar (June 16; Knopf)

Sometimes clarity is best achieved with distance; and sometimes "home" only feels that way when you've been very far away from it. In nine vivid stories, debut author Mia Alvar illuminates her native country of the Philippines through the prism of her adopted cities of New York and Bahrain, among a slew of other far-flung spots. Although the emigrants who constitute this chorus of voices have wandered far from the Philippines, each of their stories provide an evocative vision of the home they've left and returned to (or not), revealing also that "home" can be found in the most unassuming places.

When does a habit become an addiction? It's a question many of us have likely explored, but for Salon editor Sarah Hepola, that question was one her life literally depended upon. In her refreshingly honest, self-deprecating, and totally unselfish memoir, Hepola guides us through the history of her alcohol addiction, in which she was often plagued by blackouts: terrifying blank spaces akin to "a curtain falling in the middle of the act, leaving minutes and sometimes hours in the dark." This is a must-read for recovering addicts; for women susceptible to the glamour of being modern and independent; for anyone who has had a difficult past, and who wants to heal, but who wants mostly to laugh at themselves. Basically, we should all be reading Blackout this summer (and wishing the incredibly smart and candid Hepola was our BFF).

The Star Side of Bird Hill by Naomi Jackson (June 30; Penguin Press)

Naomi Jackon's debut novel whisks us to St. John, Barbados, where 16-year-old Dionne and her 10-year-old sister Phaedra are sent to live with their grandmother after an emotional breakdown leaves their mother unable to care for them. This bildungsroman is satisfyingly complex, but it's Jackson's lyrical descriptions of the island's natural beauty and rich culture that sets this book apart.