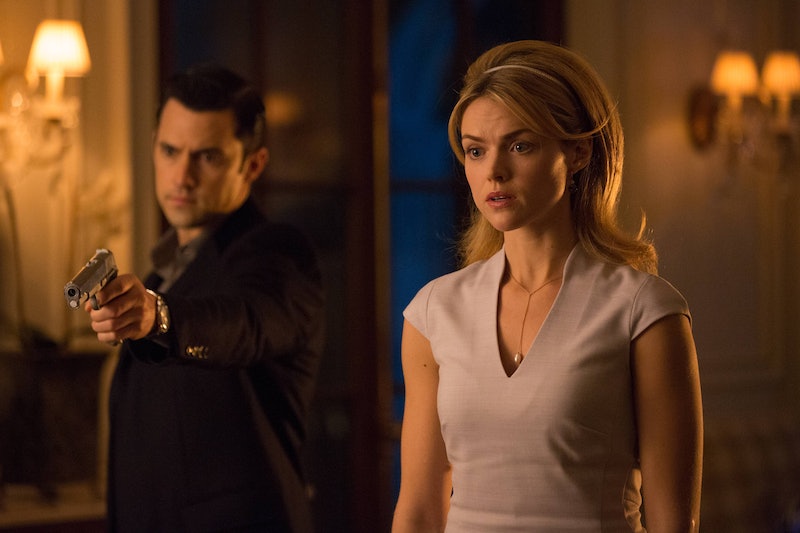 This may be the Gotham origin story we never saw coming. We've been thinking that Barbara Kean on Gotham was just Jim Gordon's wife from the Batman comics and a civilian. However, what if she's more than that? What if she's becoming another DC Barbara, also known as Batgirl? When Gordon found her in Jason "The Ogre" Lennon's clutches, she seemed changed. Is Barbara Kean becoming a hero or villain from DC Comics? She was involved with the Ogre and is seems like Barbara may have killed her own parents on the show. She wanted Jim to leave them alone, and wasn't exactly thrilled when Jason died — granted, that may have been shock.

Was she completely brainwashed, or did she find a dark corner within herself that wanted to kill? I'm not denying that there was some serious emotional abuse at play. However, before Barbara knew what Jason was capable of with his weird Phantom of the Opera act, she warned him that she had dark demons of her own and that nobody would miss her if she was gone. First of all, that's the number one thing not to say to strangers. Second of all, didn't it make you think she was an orphan? Nevertheless, there she was with two confused parents that the Ogre killed with glee. Granted, Barbara was in crisis and being heavily manipulated.

She could have chosen her parents because they were older/expendable as some kind of Utilitarian bargain (happy Mother's Day). But why did she want to do it herself? There was a gleam in Miss Kean's eye that looked like destiny and I like to believe that this is the beginning of something big.

In the comics, Barbara Gordon becomes Batgirl. This Barbara is not Barbara Kean, she is Jim's daughter. In one version, Barbara Gordon is Jim's niece. Could Gotham be combining these two characters? It's possible.

What if she's like an evil Batgirl, or an evil version of Batgirl? Gotham is free to combine characters in whatever way they want. Barbara could feel remorse for what she's done to her parents and want to give back to the world with a little bit of good, old-fashioned vigilante crime-fighting. Contrarily, she could have developed a taste for killing and wants to Dexter her way out of consequences by becoming a hero. There are many paths to the mask on shows like this. Batgirl teams up with Catwoman on many occasions in the comics, and we've already seen Barbara Kean develop a friendly relationship with both Selina Kyle and Ivy Pepper.

Barbara Gordon also, in one version of the tale, becomes a computer whiz named Oracle who is wheelchair-bound after the Joker paralyzes her. She hacks and gathers information to aid superheroes. I don't see this as a potential future for Barbara Kean on Gotham. Before she and after met James Gordon, she operates in Gotham City's art world. Unless she has some computer skills we haven't about, Barbara's comic book destiny is likely to be more traditional on Gotham.