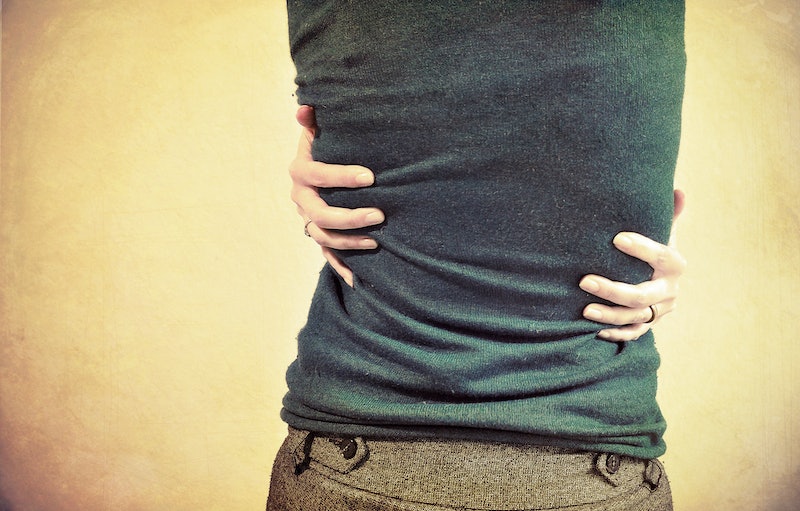 Based on my extensive viewings of Catfish, I'd say weight is one of the more common reasons people decide to set up fake dating profiles, and I'm not wrong. According to Women's Health, weight is the #2 thing people lie most about online (and physique is #3, for that matter). Many catfishers resort to lying because they believe others won't find them as attractive because of their weight, and writer Yvette Caster set out to test this hypothesis by creating two identical OKCupid profiles depicting herself at different weights. I don't want to spoil it completely, but let's just say the results may surprise you.

Caster told The Daily Mail that the purpose of her experiment was to "find out if men like fat women," and I should note that Caster doesn't use the term "fat" as negative — she personally finds the term "plus size" patronizing and likes to think of "fat" as "phat." Caster herself has fluctuated in size her whole life; at her lowest she was a UK size 10 and she is now a size 18. She went onto OKCupid and set up two nearly identical profiles. Aside from the usernames and slight variations in the wording on her profiles, the only real differences between the two were her pictures and her listed body type.

The results might surprise you: over the course of five days, the size 10 profile garnered 36 messages, 211 likes and 210 visits, while the size 18 profile got 18 messages, 74 likes and 81 visits — which, even though it's about half of what the other profile received, is still a whole heck of a lot of attention in five days if you ask me. I also think it's important to note that almost every single person who viewed Caster's profiles "liked" what they saw, regardless of size. Furthermore, Caster said that the content of the messages she received didn't vary much between the two profiles, and neither did the physical attractiveness of the guys who messaged her — proof that being overweight doesn't make you unattractive, unworthy of love, or anything else body-shamers would like us to believe. Go ahead and hug it out with yourself, you deserve it.

So even though technically Caster learned that if you go by the numbers of her OKCupid experiment alone, single men contact thin women twice as much, she says her experiment really taught her a lot more than that, and that she should lose weight was not one of the lessons she took from the experience. When it comes to loving your body, Caster puts confidence above all, saying, "no matter my size, I'm now twice as confident in my body than I was as a size ten." She believes because of her greater self-esteem, she's all-around a better person to be around than she was when she felt insecure with herself. In addition to making you a more pleasant person to spend time with, confidence is sexy, too. Yay for confidence! The main takeaway from all this? In Caster's own words, "The best philosophy is to please yourself. Hopefully then you will attract someone who likes the version of yourself you've chosen as much as you do."

More like this
What Is "The Ick?" The TikTok Dating Term, Explained
By Courtney Young
The Most Compatible Life Path Numbers, According To Numerologists
By Kristine Fellizar
9 Alternatives To The 3-Day Texting Rule In Dating
By Ginny Hogan
8 TikTok Pasta Recipes To Try Out At Home
By Emma Garza
Get Even More From Bustle — Sign Up For The Newsletter