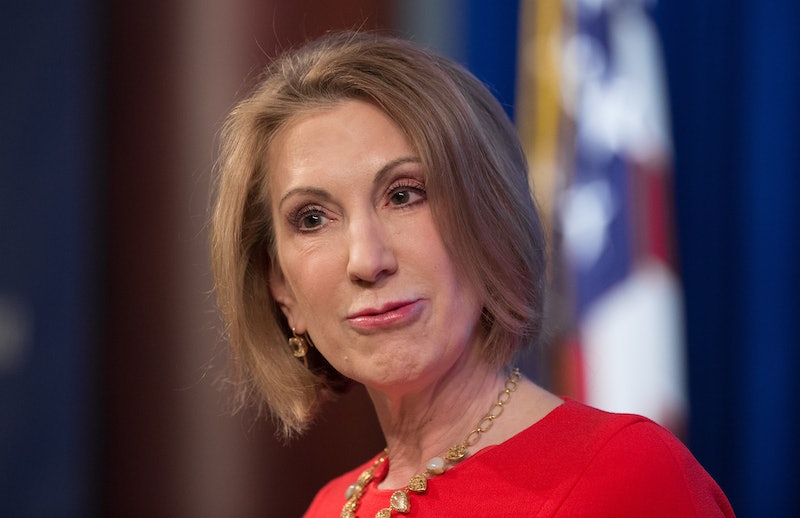 Just because the newest candidate in the GOP presidential race is a woman doesn't necessarily mean Carly Fiorina has women’s best interests at the forefront of her mind. While Fiorina has spent a chunk of her time tearing down the woman who could be her biggest competition — Hillary Clinton — she has begun to outline her stances on policies, and one opinion is that the concept of a “War on Women” is a bunch of baloney. Although Fiorina has at least acknowledged the wage gap exists and that it is not necessarily fair, she isn’t in support of instilling any legislation to change that inequality.

Fiorina, alongside many other Republicans, opposes legislation such as the Paycheck Fairness Act, which, if passed, would have required the Department of Labor to boost employee outreach and training to eliminate the pay gap, and to continue collecting information on the inequality of pay based on gender. According to Fiorina, legislation such as this proposed bill “would hurt female employees.” Rather, Fiorina suggests that the persisting wage gap isn’t a symptom of policy, but of “unions, government bureaucracies, the very constituencies that Hillary Clinton and the Democratic Party represent.” In April, Fiorina addressed the wage gap in a Facebook post:

While this debate has often been politicized by those on the left with cherry-picked statistics and quasi-facts, we do know that women don't always get compensated fairly and that we can do more. We also know that the White House and Hillary Clinton don't pay women the same as men by their own measures.

She pinpoints the seniority system as the main driver of the wage gap, and then calls out Clinton and the Democratic Party as the very supporters of that seniority system. In her opinion, installing new legislation to address the issue makes it “more about politics than solutions.” According to Fiorina, legislation would only make it harder for female employees to gain the flexibility and equal pay for which they are fighting; the real solution lies in the increased flexibility of employers. This, Fiorina explains in the Facebook post, can be done by the federal government dismantling the system of seniority that dominates most places of labor.

While Fiorina’s solution might pull favor from the conservative base that is not in support of legislation such as the Paycheck Fairness Act, her stance likely will not garner her much popularity with a large portion of the American population. According to a national poll by the Women’s Voices Women Vote Action Fund, Americans overwhelmingly support equal pay for women, with 90 percent of American voters favoring policies that would help to close the wage gap.