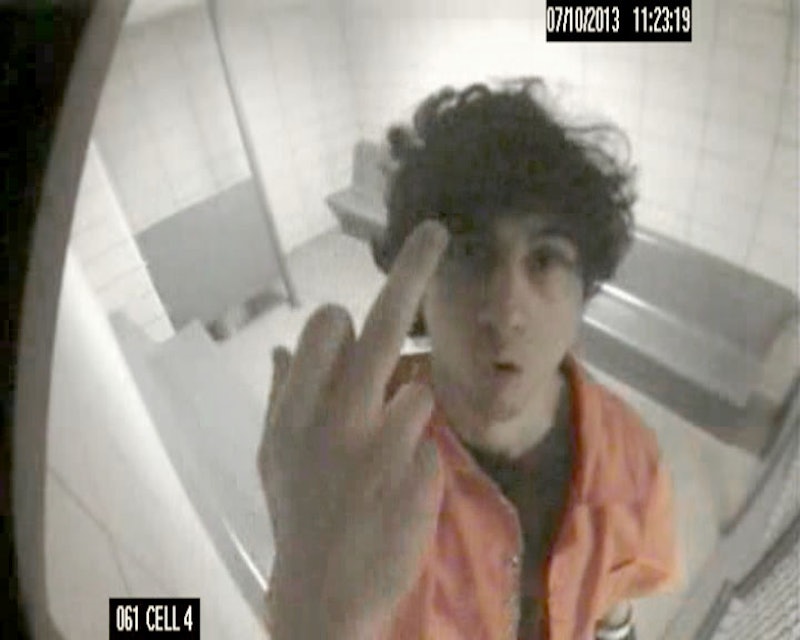 During a tearful testimony by his aunt on Monday afternoon, Boston Marathon bomber Dzhokhar Tsarnaev finally dropped his guard. The usually stoic 21-year-old, who was recently convicted of all 30 counts against him for his part in the April 2013 bombings at the finish line of the iconic race, now faces a possible death sentence for his crimes. After defense lawyers called Tsarnaev's aunt, Patimat Suleimanova, to the stand to essentially plead their client's case, the 64-year-old began sobbing uncontrollably, causing Tsarnaev himself to become emotional.

As Suleimanova began hyperventilating, Judge George O’Toole Jr. asked the defense to call another witness to allow Suleimanova adequate time to compose herself, but the damage had already been done. Cracking perhaps under the weight of years of sober-faced trial proceedings, the troubled Tsarnaev openly grieved.

"He was a very good boy — quiet, shy," explained another of Tsarnaev's aunts, Shakhruzat Suleimanova, who also testified on Monday with the help of a translator. "His family was a good family," she said.

As Suleimanova broke down, Tsarnaev, seated with his attorneys only 10 feet away, reached out for the box of tissues on the table in front of him, The Boston Globe reported in its courtroom account on Monday.

Defense attorneys have spent the last few months crafting a narrative for the morning of the bombings that placed Tsarnaev's 26-year-old brother Tamerlan in the driver's seat and pushed the younger Dzhokhar as an accomplice only. Tamerlan, they argued, was the mastermind behind it all with his baby brother tagging along. Prosecutors argued back, vehemently portraying the young man as an equal counterpart in the planning of the attack and pulling Tsarnaev's own social media posts and the angry, bloody message on the inside of the boat in which police found him as evidence against him.

According to the Associated Press, during Monday's proceedings, Tsarnaev's family worked hard to paint a softer picture of the 21-year-old, hoping to stay a possible capital punishment sentence.

"I think that his kindness made everybody around him kind," recalled cousin Raisat Suleimanova through a Russian translator. She told jurors that a young Tsarnaev had once cried while watching the animated film The Lion King. "He was very sorry the lion died," said Raisat.

"You agree that the person who cries at the death of a cartoon character but is indifferent to the suffering of hundreds..." argued Assistant U.S. Attorney Bill Weinreb before being cut-off by defense objection.

But Raisat insisted that the child she knew in her early days had simply suffered a wrong turn. While she didn't support the bombing, she said, her cousin had a good heart, at least early on.

"He was a sunny child," Raisat told jurors. "If you looked at him, you would want to smile, even if you didn’t feel good at that time."

As he left the courtroom on Monday, at least a little of the old Tsarnaev peeked his head out. After aunt Shakhruzat Suleimanova left the stand and reached out to him over the barrier as the court broke for lunch, Tsarnaev, led by U.S. marshals, turned and blew his aunt a kiss before exiting the courtroom.