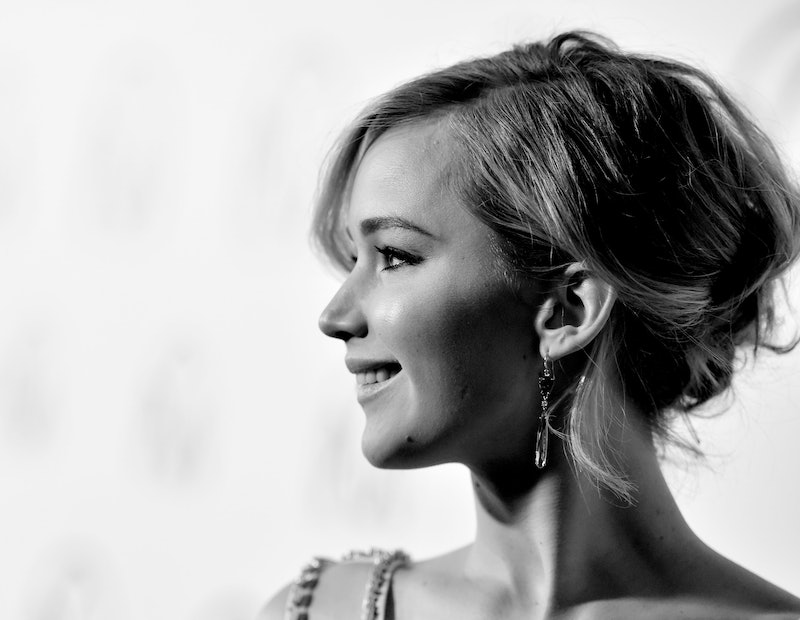 Sure, there may be a few things you can do to make your hair grow faster, but in reality, if someone goes from a lob to long, beachy waves within a month, you can be pretty sure that there's someone else's hair sewn into their head. Such is the case with Jennifer Lawrence's new extensions. The Academy Award winning actress was spotted three weeks ago with chin-length hair, and by Monday's 2015 Met Gala, J. Law's hair is grazing boob-length. Not that there's anything wrong with that. Lawrence, who is co-host of the Met Bala with Anna Wintour, looks great no matter what she does.

We must also consider the unlikely case in that J. Law's hair spotted over the last couple months was actually a short-hair wig, and that her longer hair was tucked underneath. That sort of thing happens all the time, especially when filming for a role, but it just doesn't seem like the case here. Back in March at the Serena premiere, J. Law had short hair that was tied up into an intricate up 'do. Same thing goes for her appearance in January at the Producer's Guild Awards.

So hmm, what's more likely? J. Law stuffing her real, long hair under a short-haired wig for the duration of the winter? Or J. Law applying fake extensions to her real, short hair in order to usher in a new, summery 'do?

I think we have our answer. Now that we've used ~logic~, let's take a look at the photo evidence:

And of course, her 2015 Met Gala look will no doubt show us those gorgeous waves. Updates to come!