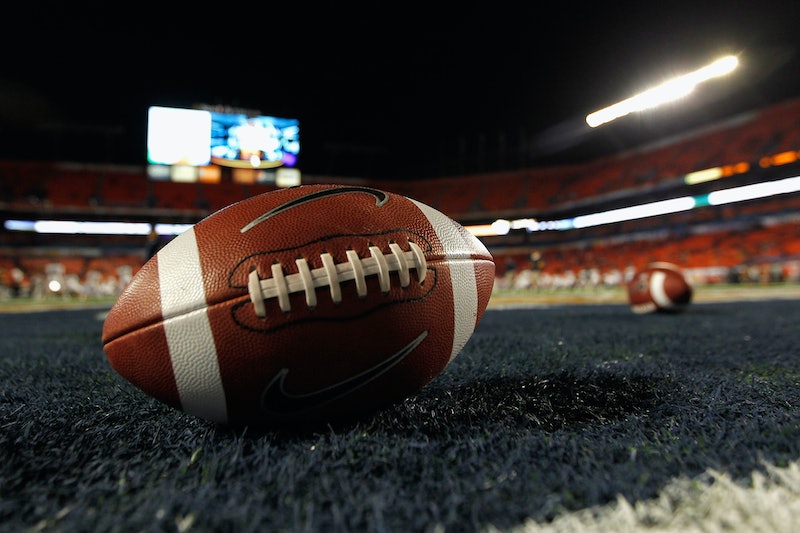 The talk about campus rape has amplified over the past few years as the issue has finally became part of the national conversation, something that was long overdue. If you're looking for an in-depth, extensively researched account of the problem that considers both the personal and political nightmares surrounding campus rape, look no further than Missoula: Rape and the Justice System in a College Town by Jon Krakauer. The book details several rape cases that rocked Missoula, Montana — including some that involved University of Montana star football players. The lessons we can take away from it, however, are valuable in addressing campus rape everywhere.

In some ways, Krakauer's book isn't novel — after all, feminists have been advocating around the issue of rape on college campuses for decades, and it has long been common knowledge in feminist circles that both college disciplinary policies and the criminal justice system often fail victims of sexual assault, and can even compound their trauma. This is not new information. However, in presenting such detailed, well-researched, and well-rounded accounts of individual rape cases from a single college campus, Krakauer's book manages to put the problem into a new perspective.

Krakauer does not delve into the underlying causes of why rape is so widespread in our society — the phrase "rape culture" does not appear anywhere in the book, and terms like "sexism" or "misogyny" are similarly sparse. Regardless, Missoula is one of the most thorough depictions of rape culture you are likely to find, and it also illustrates a few ways that the current system in place to help survivors more often fails them.

Here are just a few problems with the way campus sexual assault is handled, evident from Krakauer's book.

Not Believing a Crime Occurred

One of the biggest obstacles victims face is also often the very first obstacle — the fact that people, including the police, are likely to doubt their stories from the outset. As many, including Krakauer himself, have pointed out before, we don't immediately respond to someone who says they have been robbed by wondering if they are lying. Yet all too often police assume that rape victims are making up their story altogether.

In part, this is due to common perceptions about false reporting of rape. But no matter the cause, immediately doubting a victim, reacting skeptically to their claims, or implying that they are lying about the rape to disguise the fact that they are cheating on a partner (all of which are documented occurrences in Missoula) results in too many women never getting any kind of justice — and too many perpetrators going free, allowing them to rape again.

There are and should be ways for victims to pursue action against their attackers through their schools. As Krakauer writes, "If a student violates school policy by failing classes, or cheating on exams, or dealing drugs, or sexually assaulting another student, school officials not only have the right to sanction the offending student, they have an obligation to do so." School disciplinary hearings are often also less adversarial (and thus less likely to re-traumatize victims) than the criminal justice system, don't stretch on for years, and (because school sanctions are often less severe than criminal punishments) require a lower standard of evidence, making it more likely that perpetrators will face punishment.

Despite all these very good things, however, school procedures can also sometimes be confusing, even contradictory (as was the case at the University of Montana), and also depend on the people involved understanding facts about sexual assault rather than myths. As such, they can be difficult for victims to navigate.

As Krakauer explains in his book, football at the University of Montana is a big deal, both for the school and the surrounding community — and this certainly isn't unique to Missoula, Montana. Frequently, though, when star athletes are accused of sexual assault, the athletics department's first instinct is not to let the school investigate or discipline their players, but to fight to keep players on the field. And all too often, large portions of the community automatically take the side of the accused players, shaming and blaming the victim, as was the case with several rape cases Krakauer examines.

This is obviously a huge problem not only in that it makes it much more difficult for victims to get justice either through the university (because of internal pressure) or through the courts (because of a biased jury pool), but also because it sends the message that such behavior is excusable, and that they don't have to fear consequences. It's no wonder that, according to the author, a typical college rapist will assault an average of six victims during school. Thus, these reactions don't only do a disservice to existing victims, but help create future victims as well.

After investigating the Missoula Police Department, the Department of Justice determined that many of the officers were simply ill-equipped to handle sexual assault cases. They did not know proper ways to interview traumatized victims, they had not been educated about the psychological and neurobiological reasons that trauma can cause victims to act in seemingly bizarre ways following an attack, and they believed misinformation about rape.

For instance, at least some Missoula police officers seemed to believe that the rate of false rape reports was at least 50 percent, a statistic that comes from a long-debunked study in which the researcher used data from a single small town police force and counted as a "false report" anything that the police officers deemed a false report. The problems with this methodology should be abundantly obvious. Nevertheless, it's an often cited statistic, even though more sound research shows that rates of false reporting are somewhere below 10 percent.

According to Krakauer, the Department of Justice found that even in cases when police did investigate sexual assault cases and recommend that they be prosecuted, the prosecutors office rarely pursued them. Between January 2008 and April 2012, police in Missoula referred 114 cases of sexual assault in which they felt they had established probable cause, but prosecutors filed charges in only 14 cases, frequently giving no explanation except "insufficient evidence."

The trouble, of course, is that even when police do find sufficient evidence, sexual assault cases are still hard to win. But if prosecutors don't take them, then they often leave victims without options. Not every victim wants to pursue justice through the criminal justice system, and the decision not to pursue criminal charges is perfectly valid. But victims who do want to go that route should not be shut down just because prosecutors don't want to do their jobs.

According to Harvard psychiatry professor Judith Herman, as quoted in Missoula, "For victims of a violent crime ... involvement in the criminal justice system may compound their original injury. ... Indeed, if one set out intentionally to design a system for provoking symptoms of post traumatic stress disorder, it might look very much like a court of law."

Victims are subject to close scrutiny, intense and sometimes hostile questions, and a system in which they have little or no control over the proceedings — often while their attacker sits at a nearby table. The courts can be a nightmarish ordeal for victims, and there are very few safeguards in place to prevent victims from being further traumatized by the process.