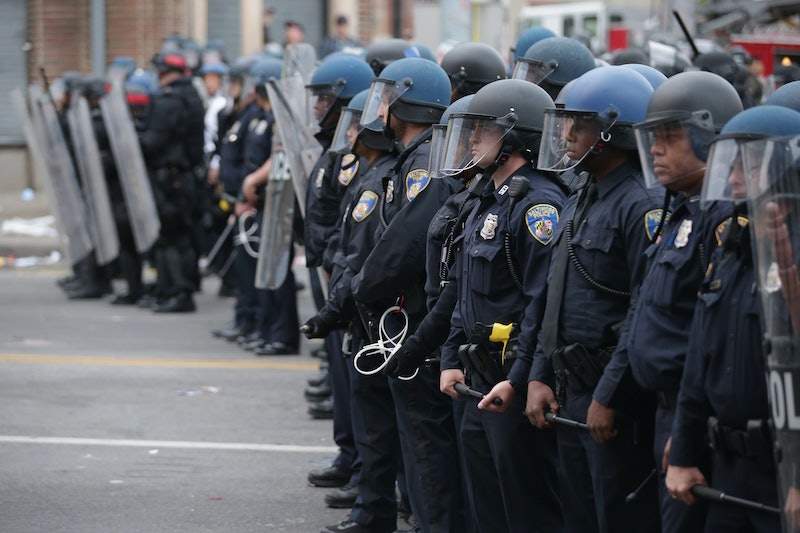 The riots in Baltimore following Freddie Gray's death after an arrest by Baltimore police calmed down the past few days, but the city's troubles aren't over just yet. Mayor Stephanie Rawlings-Blake announced Sunday that the curfew had been lifted and the National Guard began leaving Maryland throughout the week, but reports of a single shot fired Monday reignited protests.

There was confusion about whether the reported gunshot came from the police or a protestor, but according to The Washington Post, the police saw a man with a handgun and briefly chased after him. He reportedly pulled or tried to pull a revolver and police heard what sounded like a gunshot. After arresting him, cops found a gun that had one spent cartridge (meaning it had been fired). An ambulance was called and the man was taken to the hospital, although he was not injured, and did not need to go to the hospital, according to The Denver Post. Lieutenant Colonel Melvin Russell told The Denver Post that the police did not discharge their weapons.

According to CNN, more and more people came onto the streets after the man was arrested. Although police said the man wasn't shot, people told CNN that they "had little reason to believe what they were told" by the police. The demonstrations Monday afternoon remained relatively calm, not erupting into a full-blown riot like the city saw last week. According to The Washington Post, a small crowd confronted a line of police officers in riot gear, with one man lunging at the cops as relatives held him back. Deputy Police Commissioner Dean Palmere was walking along the police line saying, "Nobody got shot. A gun went off. There is a misinterpretation in the community."

The confusion created a setback in what the city hoped was the beginnings of the recovery process. Maryland Governor Larry Hogan said at a news conference Sunday that National Guard troops had already begun to withdraw and once the 4,000 people brought in to help had left, the state of emergency would be lifted. Baltimore will need time to recoup from the unrest, as 200 businesses were looted in the April 27 protest alone, more than 400 people were arrested in Baltimore since April 23, and more than 100 officers were injured in the protests, according to CNN. Hogan said at the conference that it "will take a little while to get back to normal, but let's get people back to normal, get people back in the city to visit devastated shops."