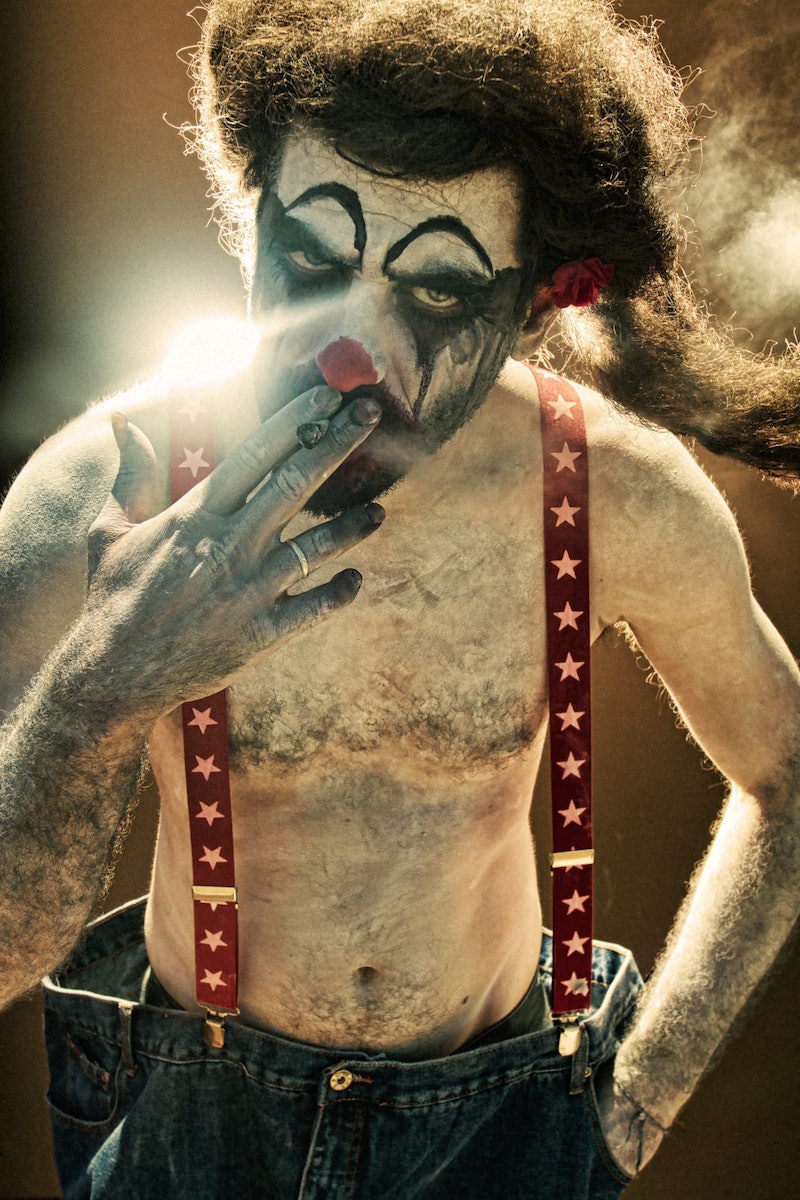 If your worst fear is clowns, then let me say upfront that these are images aren't meant for you. Any concerns you have about a clown takeover of the world are about to be affirmed. If you generally like twisted, creepy, slightly convoluted imagery, however, you're in the right place. Or if maybe you have a fetish that only enables you to date clowns, in which case it's entirely possible that these photos will give you butterflies, or send a pleasant shiver down your spine. Whether or not clowns do it for you, you'll probably find these clown portraits bizarrely alluring. It's hard to look away from them.

The artist, Eolo Perfido, currently lives in Rome and his work has been featured in GQ and The New York Times, among many other publications. His series "Clownville" features grotesque, darkened, drab photographs of clowns. They're the kind of clowns that haunt your nightmares, that is. He was inspired by silent film stars like Charlie Chaplin. (And while he doesn't cite Groucho Marx as an inspiration, you could definitely draw a few parallels.) His work is also featured in advertising campaigns, and he's worked with some of the biggest names in advertising, like Saatchi&Saatchi and Leo Burnett. Perfido is from the French town of Cognac, and if that doesn't warm your heart, I truly don't know what will.

But if you're going to be cold-hearted anyway, you'll want these photos to accompany you on that journey. Here's Perfido's Clownville:

Gray Is The New Orange Is The New Black, a new Netflix original series. Maybe, probably not.

Pretty sure this is what you'll find in Dante's six circle of Hell.

I have no idea where you'd find this.

Is it weird that I'm frightened by this image, but also kind of want to put it on my wall and stare at it? Please, no one analyze the Freudian implications behind that.

Okay, this one really will give you nightmares. If you've been waiting for an opportunity to use the word "macabre" while reading this article, now is your chance.

For such a well-known photographer, Perfido got into the business late, at age 28. He has clearly made up for lost time and then some. “Taking pictures has become something that goes beyond the simple realization of images and has deeply changed my way of experiencing life and relating to others,” Perfido says on his website.

To lighten the mood for all those who are deathly afraid of clowns, here are some more upbeat photos by Perfido:

Love everything about this. Well, except if the word "dreams" just reminds you that you're going to have bad dreams tonight re: terrifying clowns.

~Landscapes~. Pretty, pretty landscapes. Think about the prettiest place you've ever been before you go to sleep tonight and maybe it'll help knock the clown imagery out of your head.

For everyone who's ever traveled cheaply in Europe, this will take you to a happy place.

For more of Eolo Perfido's work, visit his website.

More like this
The 6 Best Closet Dehumidifiers On Amazon
By Sharon Brandwein
Here’s What Sarah Jessica Parker’s Canned Cosmo *Actually* Tastes Like
By Emma Garza
What Is “Night Luxe?” Breaking Down TikTok’s New Aesthetic
By Courtney Young
TikTok Is Using A ‘Love Island’ Sound To Expose Their Weird Crushes
By Courtney Young
Get Even More From Bustle — Sign Up For The Newsletter