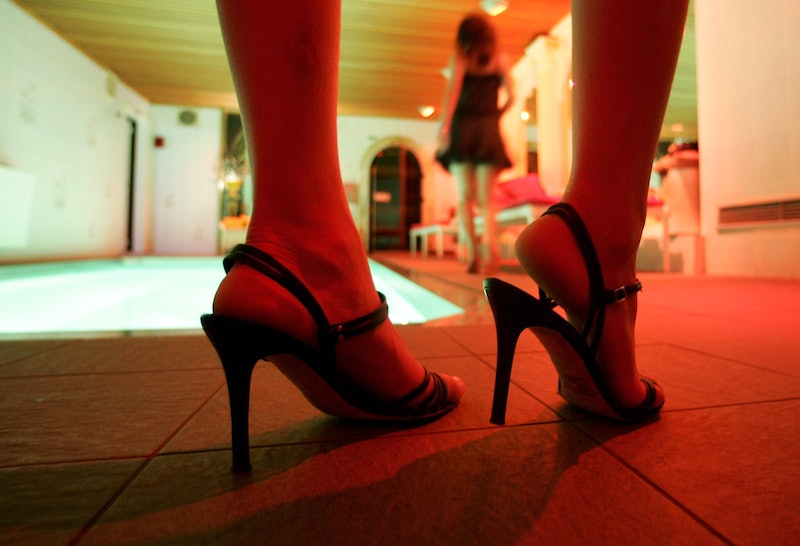 “I just don’t even know who I am anymore” is a statement I often hear while working with domestic abuse victims — one that saddens me, and is reflective of an issue that no one seems to be talking about. The girl uttering those words was a rape victim, and I was leading a support group for assault survivors. Someone stole her body, and with it, they took part of her soul.

I know what that feels like — because when someone used my body against my will, they took a hell of a lot more than just what they were after. They took pieces of my identity, pieces that I needed back. Because, you see, it wasn’t just my body that was stolen, but my entire sexual identity.

Who was I now? I thought I had known who I was before my assault, but now, afterwards, I didn't have the slightest clue.

Day after day, I would avoid the mirror, and resist looking at my flesh while I got dressed. I didn’t want to see my body, because I didn’t want to remember what someone had done to it — and to me. If I didn’t look, it couldn’t hurt. And eventually, it no longer hurt, because I barely existed. I detached from myself, just as many rape victims do, severing the mind and body connection; I existed, but existed more in the space around me than within my own skin.

This kind of detachment is so common, in fact, that it’s actually listed as a symptom for PTSD in all the rape crisis manuals. I understood what was going on, and because of that, I did everything that I was supposed to do. I saw a counselor, I went to the support groups, I read the books. And although I finally came to the understanding that what happened to me was not my fault, I still couldn’t get back everything that I had lost.

Walking through my day-to-day life, my confidence was gone, and my sense of security shattered — and with it had gone all the parts of me that I trusted. I tried to move on with my life, and pretend as though everything was normal. But inevitably, the reality of how wrong everything felt would come crashing back to earth in the most inopportune moments — moments that usually involved a male partner.

I was more than awkward during those moments. I found myself fumbling through the motions and as my clothes would come off, the shame I felt inside would take over. With each layer of clothing that was removed, I found myself building a mental barrier that carried into the bed. I didn’t want my partner to know my body, because I didn’t know it anymore. Someone had done things to it that I didn’t want done, and while I had been working hard to process that on an intellectual level, no one had talked to me about what that meant on a physical level.

Sex after rape is a whole new ballgame, and the first step — reconnecting with your own body — is the hardest one to take. Learning to reconnect with something that was so badly hurt is painful. Unfortunately it’s a process that many women struggle through alone, just as I was doing.

Then one night, after a particularly uncomfortable evening with a man I was dating at the time, I found myself standing alone in front of the mirror. I let my clothes slip to the floor and for the first time in a long time, I looked at myself. The person staring back at me seemed more like a childhood friend than the woman I was now. Someone I used to know, loved even, but after so much time and so much change, I wasn’t exactly sure who she was anymore.

But I didn’t stop looking. I’m not sure why and I can’t really explain it, but I knew that I wanted to get to know her again — to find her, wherever she was, and to remember everything she used to be.

I wanted to get to know me again.

And so I did. Slowly at first — I began by getting back into dance, which had been my passion for years. It helped me prove to myself that my body was once again under my control, and loving it once more for all the happiness that it carried me through.

Time passed and I found myself running support groups for women just like me, women struggling to come to terms with what had happened to them, and struggling to connect with who they used to be.

Rape changes you. It does. There have been many documented studies that show just how serious and devastating the emotional and biological changes that take place within a rape victim’s brain are; changes that, although manageable, are never totally reversible. You are left with a victim trying to come to terms with a new way of being, and sometimes the easiest way for them to do that is to deny the part of them that bore so much pain — namely, their body and their sexuality.

I watched this happen. I watched woman after woman come to my group, struggling to heal and yet failing to reconnect with not just the body she was in, but her sexuality, one of our most basic and primitive drives. I’d watch women come in and sit down, there but never totally there, aware but never completely aware; so present and yet so distant, wanting to heal, but avoiding the trauma. I’d watch them as they yearned to find themselves and at the same time refused to acknowledge who they were.

You can’t and they didn’t. I saw them look for those answers in all the wrong places. They ran to men, hoping to find the self worth they had lost. But they never found it there, because you can never find your worth within someone else. Some women had been so devastated that, like me, they gave up on trying to reconnect, and just shut down completely, living a life void of any sexual identity, free of any physical connections.

I watched this happen, over and over, until one day, I just couldn’t watch it anymore. I could not watch another woman “graduate” from my group and yet leave with so much of herself still missing. And I knew where those pieces were, because I had found them for myself when I had finally looked in the mirror.

But how do you get women to look in the mirror? How do you get a collective group of survivors to do the very thing that they have all avoided doing for so long?

You turn up the music and you do it together.

I started the Sexy Survivors class nearly two years ago. The class is meant to be an extension to more conventional rape crisis treatments, and it helps women in the class reconnect with themselves by stripping off the barriers between themselves and themselves. We do this by stripping. I wasn’t sure how accepted the idea would be when I first brought it up to the group, but the outcome has been overwhelmingly positive. What started as a small group of women dancing in my living room soon ballooned into a large group that meets anywhere we can find space. New faces show up every week, so many that I had to start a waiting list— women with the same stories and the same struggles, all craving to regain something that was taken from them.

I took my love of dance and years of training, and I teach rape survivors how to strip. We are standing in front of the mirror, turning up the music, stripping off our clothes, reconnecting with our bodies, and regaining our sexuality. We are coming face-to-face with the things that terrify us — our scars (both physical and emotional), our bodies, and our sexual identities. We laugh, we cry, we get our sexy on. And because we all understand, we are all able to support each other. No one has to go through this alone, because we are all doing it together.

Yes, some women will take the skills they learn to the bedroom (and more power to them!). But the fundamental objective of the class is to have victims look in the mirror, see their beautiful selves, move in ways that feel good to her and that are within her control, and own it. Yes, own it, all of it—her body, her movements, her identity, and her sexuality. Regain what was taken from her and find the pieces that she was missing. It’s her, it’s all her, she only failed to see that before, just as I had, because she was too scared to look.

So yes, I’m a rape victim, I’m a stripper, and most importantly, I’m a survivor.

I found myself again, and everything that was taken from me. And I only found it when I took off my clothes and finally looked in the mirror. I’m now happily teaching other women to do the same, because sometimes the pieces that we can’t seem to find, are the just the ones that we avoid seeing.

More like this
Here's How To Support Jewish People Amid Rising Antisemitism
By Hannah Orenstein
Emily Ratajkowski & Pete Davidson's Astrological Compatibility, Revealed
By Nina Kahn
Are Sagittarius & Capricorn Compatible In A Relationship? Astrologers Weigh In
By Kristine Fellizar
Wimbledon Alters All-White Kit Rule Amid Candid Period Discussions
By Catharina Cheung and Rachel Mantock
Get Even More From Bustle — Sign Up For The Newsletter