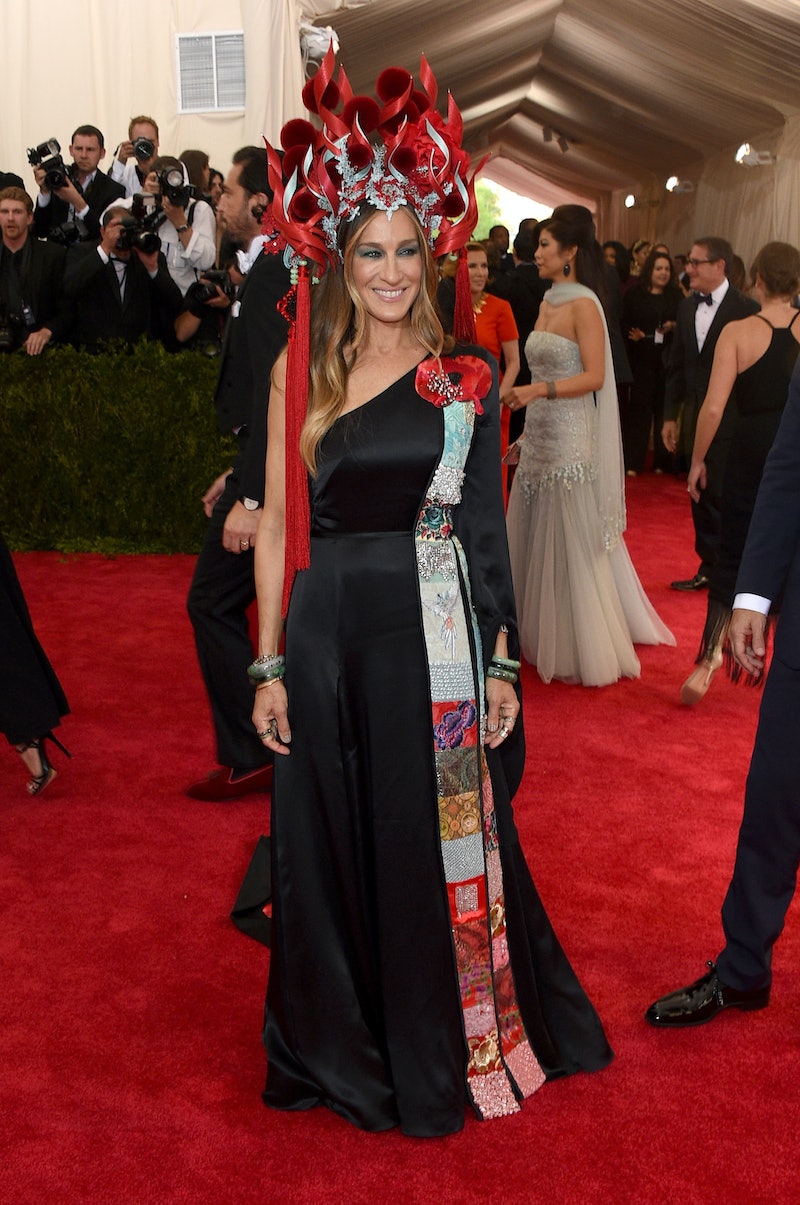 I have always wanted to be a hat woman. One of those people who could confidently don some ridiculous fedora, Panama, or, hell, even a pillbox hat and not be self-conscious about the fact that everyone is looking at my head, judging whether I'm pulling it off or not. (It would be the first time anyone would ever say, "Eyes are down here, buddy!") Which is why I can't have anything but mad respect for Sarah Jessica Parker's hat fashion over the years. And the Sex and the City star only solidified her reputation as a no-fear hat-wearer Monday — after all, Parker's Met Gala Philip Treacy headdress is quite a vision.

It is, though, a vision that's likely to inspire conversation as heated as, well, the flames sitting on top of her head. Is it a slam-dunk that stays true to the "China: Through the Looking Glass" theme? Is it cultural appropriation? Or, whatever it is, is it just downright ugly?

Jury's still out — night's still young, and barely any champagne has flowed, folks — but one thing is for sure: Sarah Jessica Parker's hat game is the best in Hollywood. (Take that, The Adjustment Bureau. #2011Jokes.) Just take a look at some of the previous hats and headdresses Parker rocked at the Met Gala, on the red carpet, and, of course, on Sex and the City. If you couldn't help but wonder, Carrie Bradshaw-style, whether Parker could pull off hats, look no further than below!

The theme in 2013? Punk. And wearing a headdress that's so not punk? That's so punk.

See? Eyes are down here, Cattrall!

It's like the spirit of Cher's 1986 Bob Mackie Oscars headdress, floating to the fashion heavens.

The perfect hat to shield your eyes from nasty stares from New Yorkers trying to cross you on the sidewalk. But, to her credit, she was in Australia — much more space there, mate.

Carrie Bradshaw's wedding might have sent Big running away, but her feathered top sent paparazzi and more running towards Parker.

Carrie's fur pillbox hat made her such a Samantha (the American Girl, that is). But no matter how you feel about Parker's Met Ball headdress...

...and least we've come a long way from this.