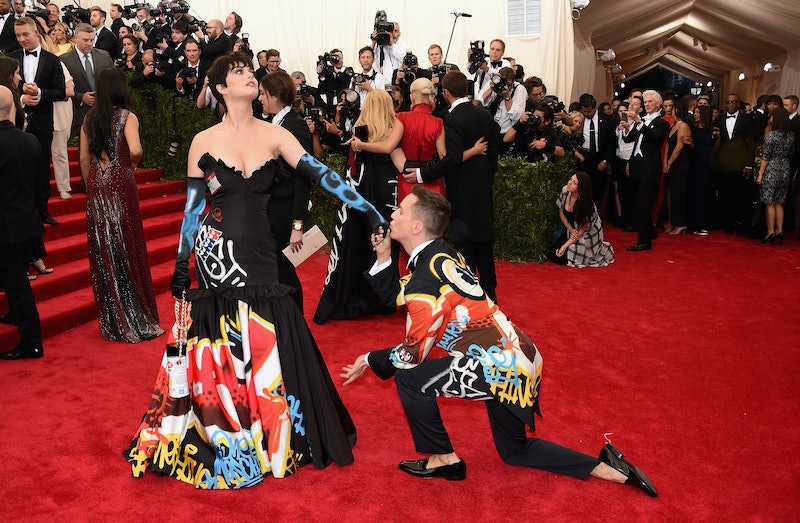 If anyone truly could be called a firework on the red carpet, it is Katy Perry. The chanteuse and style icon refuses to rest on her laurels when it comes to sartorial decisions, sporting every style under the sun from tulle embroidered with musical notes to a gown that quite literally lit up the red carpet. Perry's past Met Gala ensembles have been equally venturesome, many redefining the term "dramatic," including a crown-topped, regal Dolce & Gabbana number and the aforementioned light up gown, which proved utilitarian to fellow guests after the sun set on the event. But what did Katy Perry wear to the 2015 Met Ball?

Perry's Moschino Met Ball ensemble is predictably batty. Designed by Jeremy Scott, the graffitied, cartooned ball gown could be called nothing less than eccentric. Part Space Jam, part 5 Pointz Long Island City, and part sheer insanity... what else would one expect from a singer who routinely performs concerts in cupcake costumes and hits Halloween parties dressed as a life-sized Cheeto? After a series of beautiful yet basic red carpet gowns sported by less adventurous celebrities, Perry's one-woman art installation was a welcome breath of fresh air. Leave it to Katy Perry to get the sartorial party started at the Met Ball.

Clearly, with that purse, she's ready to paint the Met Ball, well, whatever color is in that spray can.