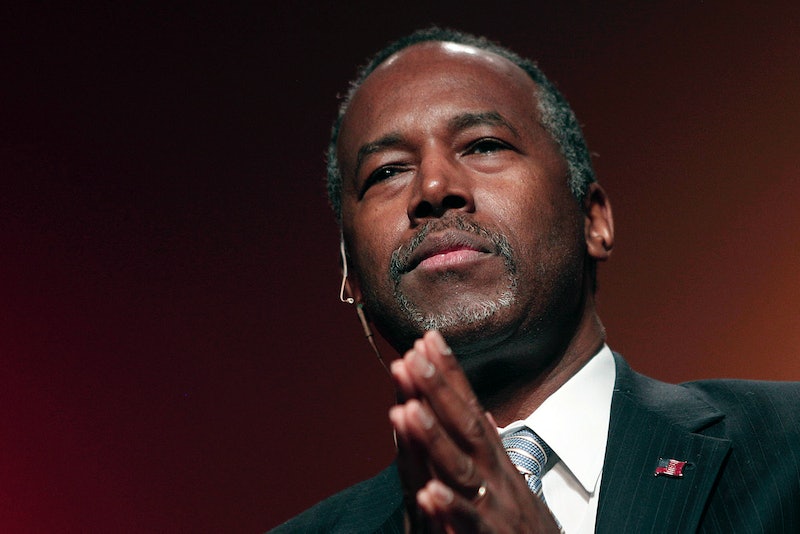 The Republican primary’s newest candidate wants conservatives to know that he is in full support of the right to bear arms. While Ben Carson's comments on gun control in the past have drawn some skepticism about his commitment to protecting the Second Amendment, the neurosurgeon turned conservative activist was quick to clarify his right-wing stances leading up to his announcement on Monday that he will be running in the 2016 presidential elections.

Carson fully agrees with the widely held conservative opinions that “law-abiding citizens absolutely should have gun rights” and that “law-abiding citizens have right to guns without registration.” His reason for his staunch support of guns lies in his belief that guns are necessary for citizens to defend themselves should the government ever go “rogue.” He offered this statement on the reason for the Second Amendment’s existence last May:

But more importantly, it’s there because if we ever have a rogue government that wants to dominate the people, the people will have the ability to defend themselves. We must always protect that right.

So far, these stances probably sound like they could be pulled straight off a Fox News show, which makes sense because Carson occasionally appears on Fox as a commentator. However, in a 2013 appearance on conservative talk show host Glenn Beck’s show, Carson offered an opinion on gun control that was way out of line with the opinions of the conservative base. When Beck asked Carson if semi-automatic weapons were okay for people to carry, he said that while he thought that was all right out in the country, he wasn't sure it was such a good idea in the city.

It depends on where you live. I think if you live in the midst of a lot of people, and I’m afraid that that semi-automatic weapon is going to fall into the hands of a crazy person, I would rather you not have it. [However, if you live] out in the country somewhere by yourself … I've no problem with that.

The statement caused an uproar among conservatives, who started to think Carson just might be tepid on Second Amendment rights, Bloomberg reported. Carson, who grew up in neighborhoods rampant with drug violence and who has lost family members to gun violence, quickly backpedaled on the statement.

Perhaps I didn’t convey it appropriately. I wanted to convey that, you know, I’ve lived in urban areas. I’ve worked in urban areas. I’ve seen a lot of carnage, and I’d prefer a situation where the kinds of weapons that create that kind of carnage don’t fall into the hands of criminal elements or insane people. But that is secondary to the desire to always defend the Second Amendment.

Looks like conservatives shouldn’t have too tough of a time getting Carson to say what they want to hear — guns included.