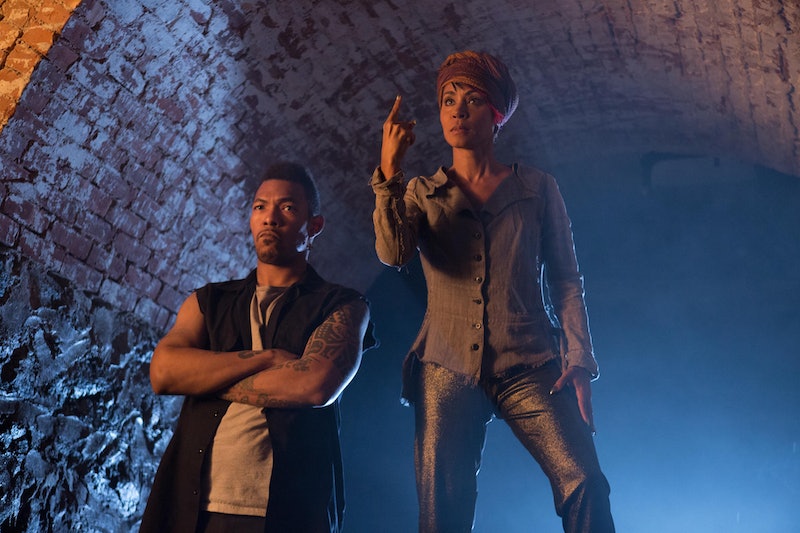 The Gotham Season 1 finale sure lived up to its promise that it would be an explosive ending. Only halfway through the episode, Fish Mooney killed Maroni after initially planning to hand him and his cronies the man they wanted, Carmine Falcone. And the threat of death from Fish was enough to prompt Carmine to go into retirement, leaving only the doomed Fish and young Penguin as the city's organized criminals. And as Jim Gordon repeated over and over again — the city needs a comprehensive underworld or it will be overrun with petty criminals and no one to keep the balance. So it's looking like Gotham will be pretty unbalanced in Season 2.

Maroni really lost his chance to have it all. It all started with the least subtle assassination attempt of all time when two thugs on a motorcycle aimed a rocket launcher right at Falcone while he was examining his prized chickens. He then had Fish agree to be his subordinate, but just had to keep goading her by calling her "babes" (NOT appropriate for a woman with a studded head!) and referring to her insistence that she should be treated as an equal as "women's lib." Rightfully, Fish gave up and shot him in the face, which is all he deserves for being so disrespectful. Who even knew that he was such a sexist pig? Blow number one to comics continuity.

Blow number two? Falcone leaving town, although you can't blame him with everyone trying to kill him constantly. Penguin betrayed Falcone for "business" reasons, mostly because he claims that he wants to become the "King of Gotham." It doesn't really make any sense how Penguin could have possibly planned for everything that happened to him since he met Falcone (which is what he said), but his "plan" somehow worked out.

Jim wound up supporting Falcone unanimously, while somehow the rest of the police ignored their job, which is to protect and serve, by abandoning Falcone in the hospital. Meanwhile, Commissioner Loeb was openly supporting Maroni, so he'll be disappointed to see that Maroni is swimming with the fishes (not literally, but the pun was irresistible since Maroni was killed by Fish Mooney). Regardless, Falcone bequeathed his ever-important pocketknife, which once belonged to Jim's father, who was a friend of Falcone's back in the day when they were younger. Ultimately, Falcone, the crooked, untrustworthy gangster who's made Gotham the city it is has become, believes that in the absence of mobsters, it will be Jim Gordon who fills the powerful void. But it will months until his words prove to be true or not... Gotham Season 2 feels a million miles away.