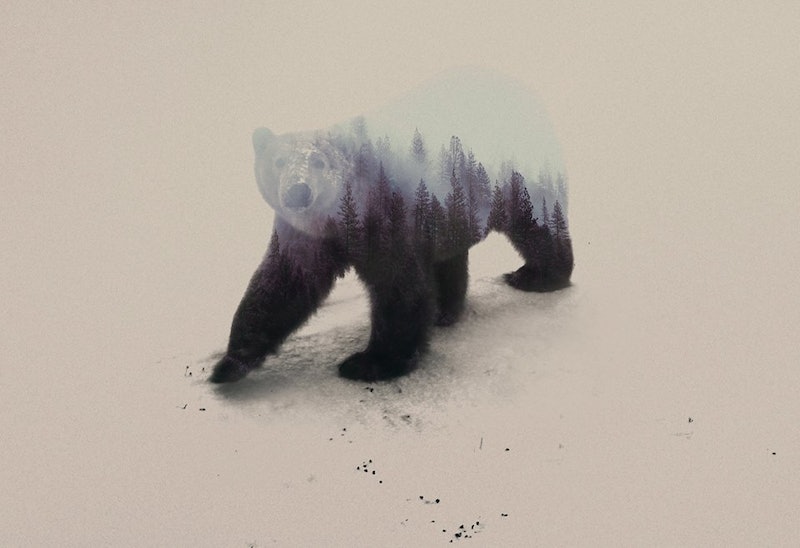 I'm still a little divided on my feelings with Norway. On one hand, they appreciate a good prank, which is valuable. However, the Scandinavian kingdom did also have that oh-hey-it's-raining-worms problem. Ultimately though, the country redeemed itself in that it made books free for all its citizens, and also brought us this amazing art project: Andreas Lie is taking double exposed pictures of animals in their natural environment across the Bergen, Norway area, and they are some of the most stunning and unique nature shots you'll ever see.

Personally, I first became acquainted with Norway through the autobiographical works of children's author Roald Dahl. Although Dahl grew up in Wales, both his parents were Norwegian by descent so the Dahls spent summers visiting other family in the country. He filled his 1984 book Boy with details of the glittering, winding fjords carving the North European landscape, and it all sounded so, well, dreamy.

Imagine that glacial landscape overlain with true-to-life images of the wild fauna scattered across the terrain. It's a really interesting concept that actually packs a lot of information in a single photograph. Lie could have potentially complicated the concept with trying to do too much but instead he kept is simple and limited to only two cohesive images meshing into one. I can't imagine how much my nerdy 8-year-old self would have been into this while deep in her Dahl phase—I can say for certain present-day me is pretty floored. I mean:

Bergen, where Lie lives, is on a peninsula on Norway's west coast. It has neighborhoods on both the fjord shoreline and scattered throughout its mountainous area—after all, Bergen is colloquially known as the Seven Mountains. It legit seems as though Lie lives a real life within a true work of art.

Lie offers up his delicate, gorgeous works for sale here. (And they're mondo cheap! Seriously, if you're looking to dress up your walls on a budget, I'd recommend scoping it out.) It's not just art prints, guys. Lie's work is also printed on duvet covers, shower curtains, and and and—I better hide my credit card right now.

Images: The Art of A. Lie/Facebook

More like this
25 Quotes About Love To Share During Pride Month 2022
By Madeleine Aggeler and Emma Garza
How To See The Lunar Eclipse On May 15-16, 2022
By Kaitlyn Wylde
TikTok's Favorite Bartender Thinks Mimosas & Bloody Marys Are Out For Brunch
By Alexis Morillo
How To Decorate Your Home Like A Coastal Grandmother
By Emma Garza
Get Even More From Bustle — Sign Up For The Newsletter