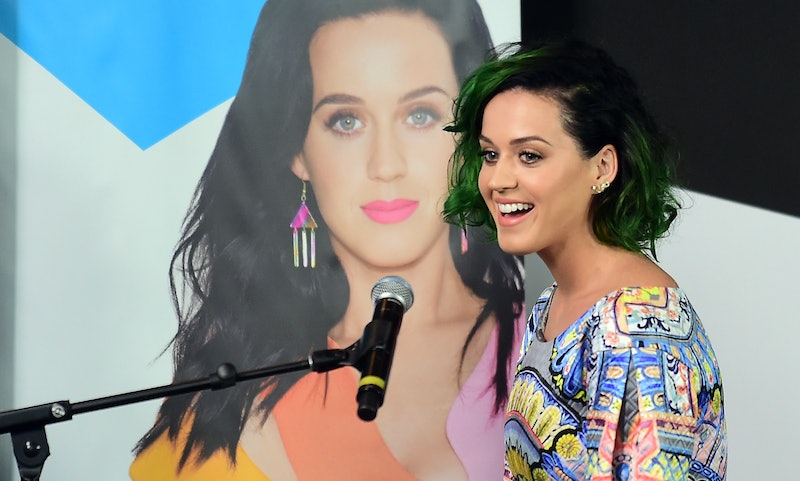 Girl power! That seemed to be the takeaway message from a certain celebrity photo from Monday night's Met Gala. This wasn't a fancy and formal red carpet photo, though. Madonna posted a photo with Lady Gaga and Katy Perry at New York's big night of fashion. And understandably, people are freaking out.

Not only is it a big deal to see three major pop stars unite for such a cozy photo at a formal event, but it is a big deal considering the temperature between these three divas has not always been quite so warm. After all, Madonna called Gaga's song "Born This Way" "reductive" in 2012 and also said Gaga a "blatantly ripped off" of her own hit song "Express Yourself." And when Gaga was asked by a reporter in 2014 about her musical influences, Mother Monster said, "I would like to say Madonna, but let me tell you something. If I was an established artist, I would love to help younger artists." Chilly!

So where does Perry fit in? Well, Perry has not-so-subtly criticized Gaga's work, like in 2010, when she seemed to imply that the music video for Gaga's song "Alejandro" was "blasphemous,"after Perry tweeted about blasphemy in art the same day the video came out. Gaga, in turn, has implied that Perry has copied her image, such as in 2014 when she threw a jab at the singer fro rocking green hair and riding a mechanical horse (staples from Gaga's past performances). So there might have been some shots fired for a star being a bit too inspired by another diva's look or image. Sound familiar? But despite the past passive aggressiveness shown between them, it looks like the three ladies have finally buried the hatchet.

On the surface, it is simply a really nice show of girl power and bonding among female singers in an industry that, as we know, is quite competitive and can be cutthroat at times. But it's also a positive thing for their fans to see, too, especially since the three stars' respective fans can be quite protective and defensive of their favorite artist and not think much of firing shots at another singer's fans in the midst of any passive aggressiveness shown between the women. That's why it's awesome that the stars want to promote love between the fandoms, too! Case in point: Perry posted the same photo on her page and used the hashtag #MONSTERCATREBELHEARTS, a combination of the three stars' fanbases' names, Little Monsters for Gaga, Katy Cats for Katy Perry, and Rebel Hearts for Madonna. And it looks like the fans are feeling the love!

Perry also made a joke in her Instagram about the three stars collaborating for a single. Let's hope that actually happens at some point!

More like this
Tom Cruise Gives His Honest Review Of Lady Gaga’s New Song For 'Top Gun: Maverick'
By Hugh McIntyre
Doja Cat Wore Surrealist-Inspired Schiaparelli To The BBMAs
By Dominique Norman
Harry Styles Addresses The Theory That His New Song "Daylight" Is About Taylor Swift
By Jake Viswanath
Joe Alwyn Reacts To Taylor Swift Earning An NYU Doctorate In A Rare Interview
By Jake Viswanath and Nicole Pomarico
Get Even More From Bustle — Sign Up For The Newsletter