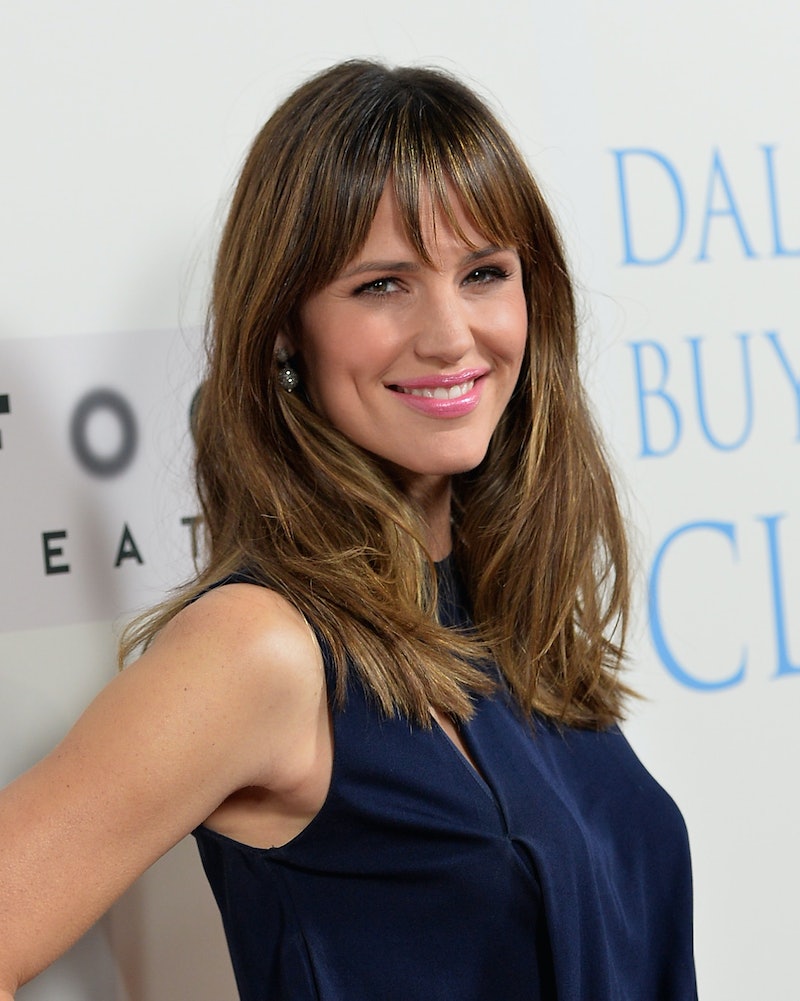 Forget Ender's Game or Last Vegas — the movie to see this weekend is Dallas Buyers Club, otherwise known as The Movie Where Matthew McConaughey Lost All That Weight. Dallas currently holds an incredible 95 percent score on Rotten Tomatoes, and have critics talking Oscar nominations for both its lead, McConaughey, and its main supporting star, Jared Leto. The movie, which centers around the true-life story of an AIDS patient 1986 Dallas, is getting tremendous praise for the important plot, the smart script, and the performances of McConaughey and Leto. Yet one key component of the movie is getting ignored: one if its stars, Jennifer Garner.

According to critics, Garner, gives a strong, heartfelt performance in the movie. In Rolling Stone's review of the film, she's called "a radiant actress of rare spirit and sensitivity." In The New York Post's, Garner "does the best work of her career." Yet in all the media coverage leading up to the movie's release, all the focus is on McConaughey and Leto — despite Garner's performance, and the fact that she's a bigger movie star than either of them.

That may seem hard to believe now, but during the mid-'00s, Garner's career was huge. After breaking through with Alias, which earned her four Emmy nominations and a Golden Globe over the course of five seasons, she turned her attention to the movies, where she became a bona-fide star. She found success with Daredevil, played the lead in Elektra, its spin-off, and, in 2004, became America's newest sweetheart with the pitch-perfect romantic comedy 13 Going on 30.

And then she married Ben Affleck. Her tabloid-loved relationship with one of Hollywood's biggest actors became Garner's main claim to fame, distracting fans from the movies and TV shows that had made her a star. In six years, Garner's made just seven films, most of which were small indies. There's nothing wrong with this by itself, of course; Garner's said that she's changed her focus from acting to raising her children with Affleck, and that's a perfectly valid choice. Yet just because she takes on fewer roles now, doesn't mean she deserves to be ignored. It seems, though, that people are forgetting that before getting married, Garner was a hugely in-demand actress. Don't remember? Here are five roles that prove's more than just Ben Affleck's wife:

Garner received enormous praise for her small but vital role in Juno, Jason Reitman's critically acclaimed dramedy about Juno, a pregnant 16-year-old (Ellen Page). As the kind, loving woman desperate to adopt Juno's unborn child, Garner gave one of the most affecting performances in the movie — which is high praise, considering the cast included Oscar-nominee Page, Allison Janney, Jason Bateman and J.K. Simmons.

Not many people saw The Invention of Lying, the 2009 comedy written by, directed by, and starring Ricky Gervais, but those that did made a good choice. Lying was a sweet, unassuming film that showcased the talents of its ensemble cast, which included Rob Lowe, Tina Fey, Jonah Hill, Louis C.K., and Garner, as the love interest of Gervais' character. In the role, the actress showed off her trademark charm, as well as comedy chops easy to forget she had.

The critical success and box office hit that was 13 Going on 30 was perfect on many levels, but most of all for its introduction of Jennifer Garner, America's Sweetheart. Thanks to Alias, it had been known for some time that Garner could act, but as a teenage-turned-adult star of this beloved rom-com, she proved that she could charm the pants off of anyone.

Sure, both these movies aren't out yet, but judging from the information released about them so far, they're poised to be the exact kind of smart, funny movies that made Garner so popular with audiences to begin with. In Imagine, a dramedy about a faded musician (Al Pacino) who decides to reconnect with his son (Josh Peck), Garner's role is unknown, but with a cast that also includes Annette Bening, Bobby Cannavale and Christopher Plummer, it's sure to be interesting. And in Draft Day, an Ivan Reitman-directed sports drama about the draft pick of the General Manager of the Cleveland Browns (Kevin Costner), Garner will play Costner's secretary. In another movie, that could be a bland role, but in an Ivan Reitman drama with a cast that also includes Frank Langella, Sam Elliott, and Ellen Burstyn? It's likely to be something great.

More like this
At 14, Bryce Dallas Howard Was Being Grounded From Set
By Olivia-Anne Cleary
Jennifer Hudson Becomes An EGOT Winner At The 2022 Tony Awards
By Jake Viswanath
Everything To Know About Ben Affleck's Nike Drama Movie
By Radhika Menon
What Does The Presley Family Think Of 'Elvis'?
By Arya Roshanian
Get Even More From Bustle — Sign Up For The Newsletter