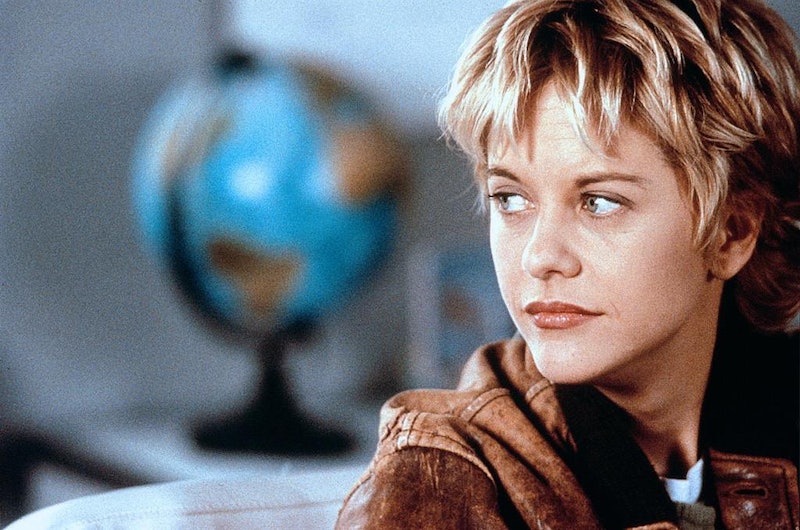 On May 5th, 1995, the semi-screwball romantic comedy that is Meg Ryan's French Kiss came crash landing into our theaters. I have always had a fondness for Meg Ryan. If Julia Roberts was the mother of all romantic comedies in the '90s, Meg Ryan was her cute, neurotic sister. Most of her characters in the rom-com genre were mired in obsessive compulsion, usually exhibiting qualities that implied some form of anxiety or personality disorder. French Kiss is definitely on the B-side of the '90s rom-com canon — its gender politics are questionable, at best — but I'll be damned if, 20 years later, it didn't manage to charm my socks off! (Seriously, where did my socks go? My feet are so cold...)

French Kiss casts Ryan as the straight-laced, neat freak Kate. Like a lot of rom-com characters in the '90s, Kate leads a whimsically easy upper-middle class life: she has a handsome Canadian fiancee named Charlie, a sizable nest egg with which she plans to buy a beautiful home, and is well on her way to being a full-fledged Canadian citizen (that's everyone's dream, right?). Unfortunately, Kate has a horrendous fear of flying and — UH-OH! — Charlie's going to Paris. Jump ahead three minutes, and Charlie calls from France to be like, "Hey babe! I met some French chick who makes me feel free! I know, I'm the worst! Bye-eee!"

Devastated, Kate decides to brave her fear of flying and heads off to Paris to win back her self-centered Canadian. That's when she meets swarthy French crook Luc (Kevin Kline), who secretly uses her to smuggle a vine into France to save his family's vineyard. Hijinks ensue, duplicitous plots unfold, and, in the end, Kate learns that what she needed all along was an unwashed Frenchman to teach her how dumb she was for liking a clean home and saving money.

Now that we're all feeling warm nostalgic fuzzies for Meg Ryan's early career, let's jump in and ask the important questions about 1995's French Kiss: what parts hold up, what aspects seem weird in hindsight, and what elements are flat out atrocious?

Meg Ryan Is A Delight

There's a reason Meg Ryan got cast in the same character a lot: she's really good at it. Ryan's ability to seamlessly navigate the winding paths of neuroses within her characters is utterly entertaining to watch. More so than any other '90s ingenue, Meg Ryan has an unbelievably honed sense of comedic timing. That timing is on full display here.

Not surprising, since he's basically perfect in everything he does. He and Ryan elevate the entire affair, and their chemistry is what keeps the movie from being a completely trite experience.

WHAT SEEMS WEIRD/OUTDATED IN HINDSIGHT?

When Kate and Charlie find out a home they've been eyeing is finally on the market, Kate reveals that they can afford it because she's been saving "every week of her adult life," and she's built up a nest egg that will solidify their future together. How much? $45,782, because apparently that's all it took to buy a five bedroom two-story Victorian in Canada in 1995. Today, that wouldn't even cover a full year at NYU, let alone coveted real estate.

Charlie's Mom Helps Kate Stalk Charlie, Even Though They're Not Together Anymore And Kate Is Clearly Having A Nervous Breakdown Throughout The Movie

Nothing can gloss over a complete psychological meltdown rooted in pathological codependence like a '90s movie. The clip above is how Kate successfully convinces her former future mother-in-law to give her the details of Charlie's every move throughout France.

Like, a lot, and she's really open about her bigotry. She repeatedly refers to the French as rude, smelly, manipulative, and dumb.

The Movie's Take On Love

"Can I ask you something," asks Kate, staring wistfully into Luc's brooding eyes, "do you believe in love? The kind that lasts forever...?" Sigh... No, Meg Ryan, I do not. I haven't since the version of it that was sold to me in the '90s turned out to be a total lie.

As a light and fluffy comedy featuring two talented leads, French Kiss succeeds; as an intriguing or complex portrayal of gender dynamics, it does as well as most rom-coms from the '90s: very, very poorly. Watching Meg Ryan invest so much energy and self-worth into the emotionally manipulative Charlie is painful after twenty minutes, let alone two hours. Also, how clumsy and anxious can a grown woman be? And the worst part? In the end, SHE USES HER NEST EGG TO HELP LUC BUY HIS VINEYARD BECAUSE HE "IGNITED HER FIRE," EVEN THOUGH HE'S A CRIMINAL AND SHE'S BEEN SAVING THAT MONEY HER "ENTIRE ADULT LIFE."

What could she possibly need that money for now that she's not with Charlie? It's not like she has hopes or aspirations; anyway, she'd probably spend it all on hats. Better give it to the jewel thief she met two days ago!