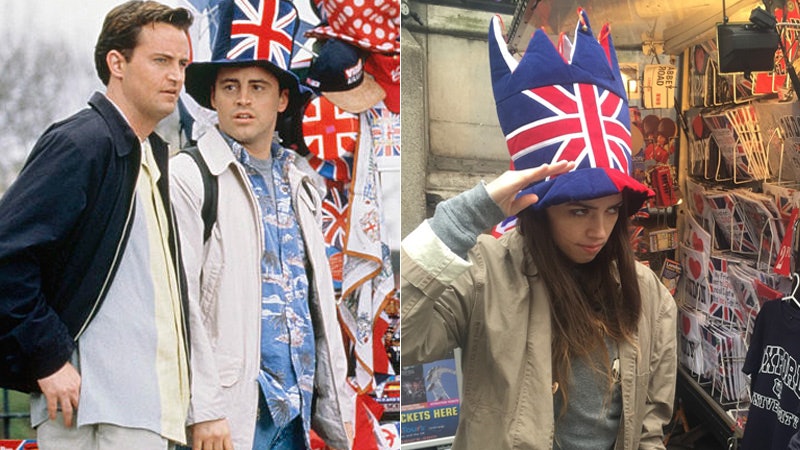 Full disclosure: I am not a tourist to London. I was born there, grew up on the Tube, spent my adolescence drinking in (and stumbling around) Hyde Park, ate beans and cheese on toast at least three times a week, consumed more cups of tea than is possibly healthy, you name it. Unfortunately, thanks to a staggeringly awful sense of direction and living outside of London for the last seven years — OK, OK, it's probably because of the sheer number of brain cells I killed falling over in Hyde Park — I'm more of a tourist than I am a native. Seriously. I leave the house, and I'm Joey in Friends' London episode, blinking rapidly and unable to take one step in the right direction without the help of Google Maps. I came, I saw, I got lost.

Which brings me to the dream team: Joey and Chandler. Like Joey, I am enthusiastic and easily confused and eager to know more about London. (As you're about to learn, my acting skills are also on a par with his on Days Of Our Lives.) Like Chandler, my friends are all, "Could you be any more lost?" (OK, I'm paraphrasing. What they actually say is: "Please leave a half-hour earlier than you have to and try not to bloody walk into anyone.")

Luckily, I'm already more than comfortable being publicly mortified with my friend Sophie — we used to wear matching lime-green sports jackets and thought we were cutting-edge; we share a long and storied history of walking into walls, lampposts, and one another — I mean, here's when we tried banana boating, for example.

It took a good 15 minutes for us to haul ourselves back onto the boat. There were several people watching. These people were not laughing quietly. The point being: Who better than Sophie to re-enact Joey and Chandler's tour of London with?

Joey and Chandler's big day out begins with the two of them leaving the London Marriott Hotel in Grosvenor Square, aka where Joey says the immortal words, "London, baby!"

First off. The London Marriott Hotel is a nice freaking hotel, with one room for two starting at an eye-watering $600 per night. Sure, we're not in 1998 anymore, but Joey's an unemployed actor at this point. Why couldn't they have crashed in a nice Holiday Inn?

Well. It probably all went on Chandler's credit card. "Hello!" I say brightly to the doorman. "Do you happen to know Friends? The TV show?" I start to hum. "So no-one told you life was gonna..."

"Yes," the doorman says, giving me a weird look.

"You know that episode when Joey and Chandler, um, you know, stay here, and come out of here, and sort of stand..." I hope that at some point, I'll start to make sense. "You know, and Joey pulls out the map with the pop-up bits, I couldn't find it on Etsy..."

"Yes, I know the episode," says the doorman patiently. "I was in the episode."

Obviously, we had to stop and take a picture with him. "Stay in character, Sophie!" I hissed. "Miserable! You're miserable!"

Our adventure had only begun, and we'd already met one of the stars of the show!

It's a shame the other star of the show — Joey's legendary pop-up map of London — had only one objective: to smack me in the face.

The Trip To Westminster Abbey

Later, Joey and Chandler go to Westminster Abbey, which is a gorgeous, historic abbey draped in history and intrigue.

I assume. When we went, there was scaffolding on it. And all I know is that Will and Kate got married there.

Neither Sophie nor I are particularly good at running, so we braced ourselves to have to apologize after slamming into tourists.

Could we be any better at acting?

Come back, Sophie! (I was also a bit worried because she's not really supposed to run in public. Well, we both aren't. It's not safe for other people.)

The Scene Aboard The Bus

I love open-top buses. You know who doesn't? Chandler.

Here's what we learned: That bus tour is long. Start to finish, it's two hours and 15 minutes. Given that Chandler isn't in the greatest mood anyway, that can't have helped. I mean, it even stretches into the ending credits.

Once again, the wind was not my friend.

By the time we got to London Bridge, Sophie was getting into the swing of being Chandler.

Taking In The Sights

That Friends episode — "The One With Ross' Wedding, Part One" — is littered with London images in its B-roll, presumably all stuff Joey and Chandler would have seen during their epic tour.

Here's Buckingham Palace at the beginning of the episode, for example.

Then there's Big Ben after the opening credits...

And here's Tower Bridge. Here, you're seeing it from the same angle as the bus does, offering support to my theory that the camera guys went on the bus tour with Matt LeBlanc and Matthew Perry and shot all of the footage from there.

Joey and Chandler's journey comes to an end in this climatic scene with Richard Branson, in which Joey buys a Union Jack hat and refuses to take it off.

The hat, for Chandler, is the final straw.

We did not track down Richard Branson — he's moved up in the world a little since 1998 — but we did find a remarkably similar hat.

Funnily enough, we found a girl on the tour bus with the exact same hat as Joey's, but I loudly demanded to know where she'd got it and was shushed by the tour guide. It's fair to say the tour guide was not our biggest fan.

"You'll have to buy that before you try it on, you know," the stall owner said gruffly. Unlike our friendly doorman, he had no patience for Friends.

Having spent a full day channeling Joey and Chandler, here are our takeaways.

Also, Sophie and I would likely have gotten lost and/or injured without the help of our friends Lydia and Lindsay, who deserve all credit for hoisting us on and off the bus and reminding us about our indoor voices.

Not to mention my mother, who weirdly thought we'd get lost if left to our own devices, helped by watching "The One With Ross' Wedding, Part One" on repeat and making notes.