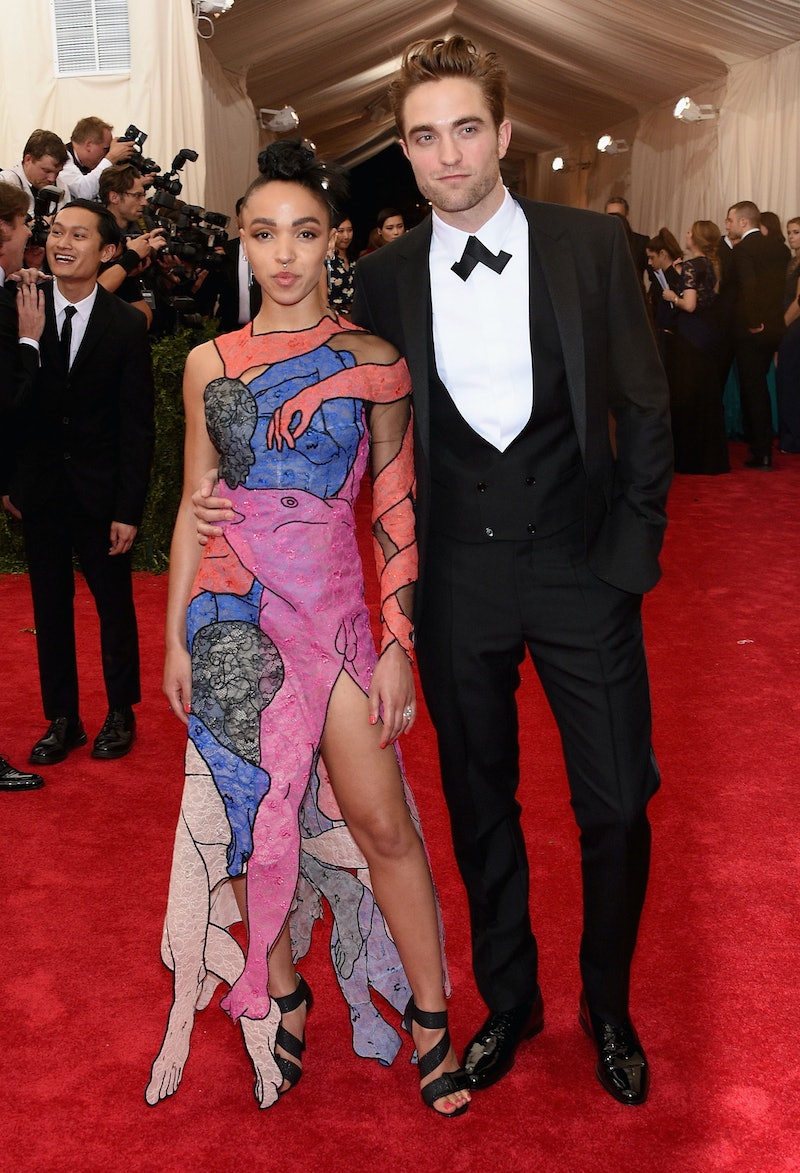 If you were keeping tabs on the Met Gala red carpet Monday night, chances are there was a certain duo that caught your eye. Robert Pattinson and FKA Twigs made their red carpet debut as a couple together at fashion's big night in New York. You can't help but step back for a few moments and appreciate the beauty of this.

After all, a fiercely private couple making a fashionable entrance at one of the most glamorous and most talked about American soirees of the year is the type of thing movies are made of. But after you recover from seeing these two pretty people, your thoughts might wonder back to the rumor that Pattinson and FKA Twigs might be engaged. And you might wonder if the couple has confirmed or denied reports since the rumors surfaced.

Well, I have sad news for you — the actor and singer are probably never going to formally announce their engagement. Besides being a private couple that mostly keeps to themselves, Pattinson and Twigs very rarely offer even the slightest glimpse into their relationship. Why would they stop now? Of course, I could be wrong and we could see an announcement all over the Internet tomorrow, but if they do such a thing, I will be floored. Below are just a few reasons why.

They haven't confirmed or denied the rumors that started last month

It's hard to believe that it's been over a month since T-Pain blabbed to Vulture about the couple being engaged on April 1. Since it was April Fools' Day, and the rapper later said he was joking about the engagement, and many were surprised when the rumors were refueled the next day, confirmed by People, among other sources. Considering Pattinson and Twigs still have yet to formally weigh in, it's safe to say we shouldn't hold our breath waiting for them to do so anytime soon!

They can be extremely camera-shy

The Met Gala being an obvious exception, this couple is rarely photographed together. And when they are snapped by the paparazzi, they are in complete control of how the photo turns out. And it's not always cozy! Check out the picture of their recent stroll out of New York's JFK Airport. Though it was obvious the two were walking in the same direction, they were far enough away from each other that they could easily be mistaken as strangers!

They pretty much never talk about each other

You'd be hard pressed trying to find a sweet mushy quote from Pattinson or Twigs about their relationship. Though Twigs has opened up a bit about the unfortunate racist comments she's received from Pattinson's "fans," you won't hear her say much about her life with the Twilight alum. Pattinson, for his part, is keeping his lips zipped.

This is probably the sweetest reason why they will never fess up. When Pattinson and Twigs are together, you cannot deny the look of love in each other's eyes. It sends a clear message that while their work might be open to the public, their relationship is for them and only them. And really, it's kind of beautiful.