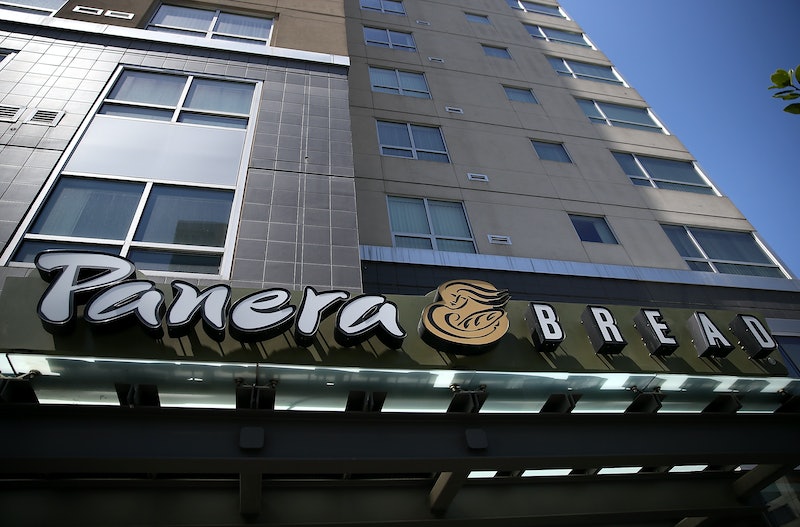 To help maintain its reputation for making high-quality food, Panera Bread has joined a growing list of national companies to remove certain artificial ingredients from their products. However, the fast-casual sandwich chain has taken an additional step that other companies have not: Panera has publicly posted its banned ingredients to be completely transparent with its customers. Panera's No No List includes more than 150 artificial preservatives, sweeteners, colorings, and flavors that the chain has either already removed or plans to remove by the end of 2016.

Customers can visit Panera's website to download the No No List, which includes hard-to-pronounce items like Acesulfame K, Carboxymethyl Cellulose, and Tertiary Butylhydroquinone (that is a mouthful that you probably don't want in your mouth). These are an artificial sweetener, a bread modifier, and a food preservative, respectively.

In announcing the removal of these artificial ingredients, Ron Shaich, chief executive of Panera, told The New York Times:

We’re trying to draw a line in the sand in the industry so that consumers have an easy way to know what’s in the food they buy.

This is truly the first, real salvo in the effort for food transparency.

According to the exec, Panera uses 465 ingredients in its menu items, which meant that company workers really had their work cut out for them. In order to remove the items on the No No List, they had to coordinate with the chain's suppliers and the suppliers' suppliers, who were not sure whether their products contained the ingredients Panera was prohibiting.

These ingredients have been added over time to improve efficiency and consistency and as preservatives as supply chains have gotten longer and longer.

Some of the more difficult items to tweak, according to Burnett, were the salad dressings, which were formulated to reach an exact viscosity and flavor. Two specific dressings that got rid of artificial ingredients include the Greek dressing and the poppyseed dressing. For the former, Burnett told the Times that the company had to go back to the basics and use lemon juice, garlic, oregano, and rosemary. (That doesn't sound like a bad — or costly — move to me.)

Another item that has been edited is the mozzarella cheese on the tomato mozzarella flatbread, which will no longer contain the whitening agent titanium dioxide. This particular move could cause the cheese to brown, but it's a move that both the chain and customers will have to adjust to. While countless restaurants have learned to deal with the short shelf life of certain products, it's understandably a much more daunting task for a massive chain like Panera, which has nearly 1,900 locations throughout the U.S. and Canada.

While some have pointed out that even with these changes, the calorie count in Panera's menu items still remain high, Shaich says that it's up to the customer to make those personal decisions. The important thing here is transparency. He told USA Today:

We want to be an ally for people eating well — not the food police. There are days when I love the indulgence of a blueberry muffin. We're about the joy of food.

Here's the full list, which includes both ingredients already removed and about to be removed: