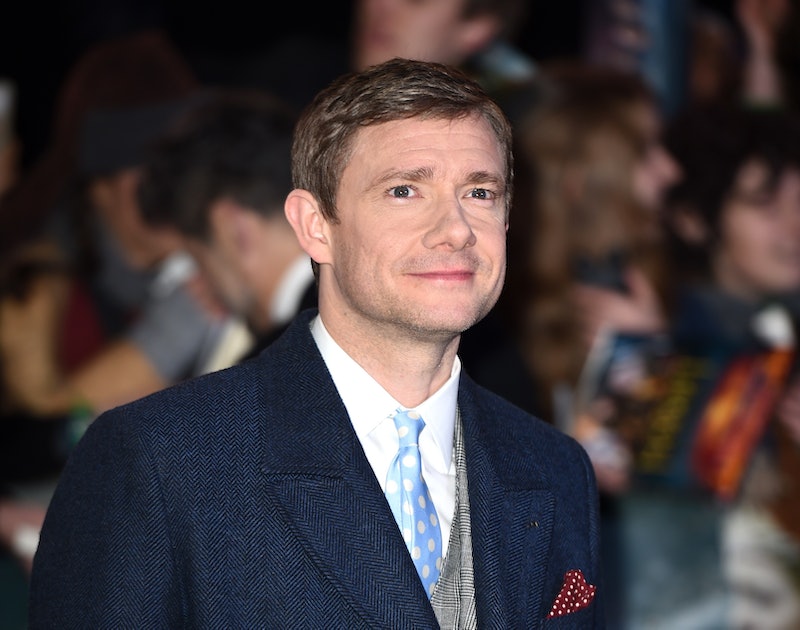 Even though it seemed impossible to me that Marvel's highly anticipated Captain America: Civil War would even have any screen time left for a new star — what with how many people are already starring in it — I'm not afraid to admit when I'm wrong. The newest big name attached to Captain America: Civil War is Martin Freeman — aka Sherlock's Watson and The Hobbit's Bilbo Baggins. Deadline reported on Tuesday that Freeman just signed onto the movie, though that's all the information we have so far. But, though we have to wait until May 2016 to see his role in full, we'll likely find out who he's playing long before that, because damn, does Marvel know how to do a marketing campaign.

If you're not familiar with Martin Freeman, you must have been living under a rock Patrick Starr-style for the last 10-ish years. Obviously, he's John Watson to Benedict Cumberbatch's Sherlock Holmes on the phenomenal BBC series Sherlock, and he's the star of The Hobbit films as well. But maybe, if you're in your mid-20s like me, your first encounter with Freeman was when he played Arthur Dent in the cult classic The Hitchhiker's Guide To The Galaxy. Even though it'll be a minute until we find out who Freeman will be in Captain America, there are a lot of reasons to love him already — and here are just a few to celebrate this new casting news.

He Loses It On Set

Freeman's best TV role is arguably Tim on the BBC The Office— aka, the British predecessor to Jim Halpert. It's obviously incredibly difficult to keep your cool when you're sitting across a desk from RIcky Gervais.

Cutest part of the interview?

M: When did you get your first television?

I: I saw television with my next-door neighbors. I used to go to watch the kids’ programmes. I never thought of being on it. I do remember telling my mum, “This is the future” [laughs].

M: I remember my mum saying that it was truly magical.

I: What was magical was, what was happening was actually happening. It wasn’t a film. It was real life that you received with the immediacy of the radio. Radio was the big thing. And radio was wonderful for the imagination. I always thought television didn’t quite match up to it.

He Can't Keep His Cool In Interviews

Freeman fully acknowledges that he shouldn't swear so much in interviews — but I hope he doesn't stop anytime soon, because that's what makes him so charming.

He's Been In Some Of The Best Movies And Shows, Ever

It would be a fool's errand to name all of Freeman's works here, but you can go marvel (get it) at his IMDb account. Some of my personal favorites: Shaun Of The Dead, Love Actually, Sherlock (duh), and his last appearance on Saturday Night Live.

His Style Is SO British

Close your eyes and picture a British man. Is it Martin Freeman? It is now.

He Loves To Use That Middle Finger