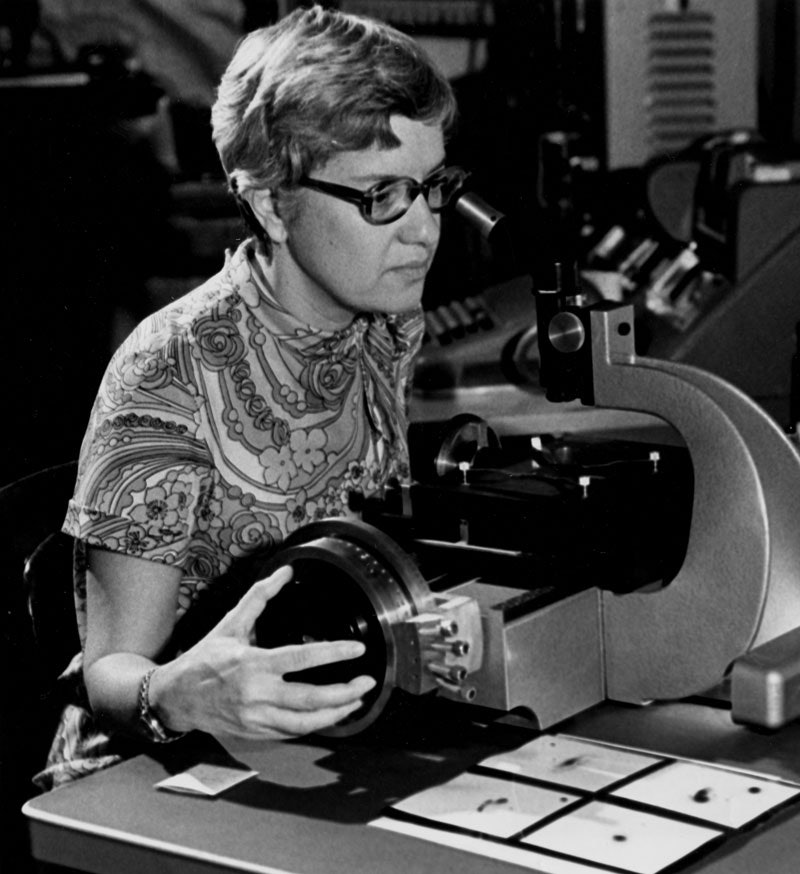 Sexist discrimination in STEM — an acronym bringing together science, technology, engineering, and mathematics — is such incredibly old news that it's a serious wonder we haven't discovered the words "WOMEN CAN'T BE TRUSTED TO ADD" in cave paintings. The topic reared its head again last week, when a (male) peer reviewer of a scientific paper written by two female scientists advised them to “find one or two male biologists to work with (or at least obtain internal peer review from, but better yet as active co-authors)" to stop them "drifting too far away from empirical evidence." Women: apparently so incapable of rational thought that they can't be trusted to produce science that's unbiased. (And, according to the same peer reviewer, possessing far less "health and stamina" than men.) If that doesn't start you frothing at the mouth, just wait — there's plenty more where that came from in the sexist history of science and math.

As much as Google rejoices over figures like Ada Lovelace, and Marie Curie is a household name (deservedly — have you won two Nobel prizes lately?), gender discrimination remains a serious problem in STEM fields all the way through, from recruitment to publication. A seriously upsetting study in 2014 revealed that the exact same resume for a lab management job won significantly more positions, was offered a higher salary, and was seen as far more competent if it was submitted under the name "John" rather than "Jennifer." Every time progress seems to be made, evidence continues to mount that serious gender biases still exist, like, oh, men being twice as likely to be offered jobs in mathematical fields as women. (The shocking thing about that study is that women also offered fewer jobs to women.)

Implicit gender bias is keeping women out of STEM, and it's been that way for a seriously long time. So let's put it into a little historical context, shall we? Be prepared to steam at the ears: here are some of the worst sexist moments in the history of Western science.

1. Caroline Herschel Has To Live In An Attic

If the name "Herschel" rings a bell to you, it's probably because of Caroline Herschel's brother, Sir William Herschel, a famous astronomer who discovered Uranus and was the British King George III's "Court Astronomer." His sister Caroline, however, had her own luminous career, discovering eight comets and becoming the first woman to receive a salary from the king for scientific work — when she had time, in between running Herschel's entire household and living in his attic (and later in his barn).

Herschel was encouraged by her brother in her astronomical talents, which were considerable, but she had a hard time of it: he was the astronomical star of the family, pun intended, and she was the one who polished the telescope mirrors and made notes of his observations. When they lived in Bath, she resided in the family attic while he had comfortable rooms downstairs, and when William got married in 1788, Caroline moved out of their house to an external building. To add insult to injury, Caroline's mostly been depicted as a harpy who clung to her brother's coattails, although a recent biography ( Age Of Wonder by Richard Holmes) has resurrected her reputation a bit.

2. Vera Rubin Is Rejected By Princeton

Dr. Vera Rubin is a pioneering astronomer who found the first empirical proof of "dark matter," invisible matter that makes up a large proportion of the mass of the universe, by measuring the orbital speeds of stars in spiral galaxies. Before that, however, she was rejected by Princeton for a graduate degree because their astronomy program didn't accept women. At all.

This was in 1948, and they held onto that policy until 1975. Rubin has spoken openly about her battle with sexism through her career, and made it a point to be available for mentoring for women following in her footsteps: she once said, "It is well known that I am available twenty-four hours a day to women astronomers."

Esther Lederberg is a Nobel Laureate That Wasn't — because her husband got all the credit. Her field was in bacterial genetics, and she made huge strides of knowledge, including discovering a virus that infected bacteria, but the establishment at the time wasn't willing to acknowledge that a woman could do such amazing work on her own. They awarded her collaborator, her husband Joshua, the Nobel Prize in 1958 for their combined work on how bacteria mate — and excluded her entirely.

Lederberg's pioneering work also didn't garner her the academic standing she deserved; she had to fight tooth and nail to keep academic jobs at Stanford when she should have been a tenured professor the second she walked in the door.

If there's one name that probably rings a bell when it comes to sexist injustice in science, it's probably Rosalind Franklin's. She was famously cheated out of credit for her contribution to the discovery of the DNA helix by an effective hijacking: James Watson, one of the two credited discoverers, was secretly shown her work by her colleague Maurice Wilkins, who'd taken it without asking.

Both Watson and the other co-discoverer, Francis Crick, who won the Nobel Prize in Physiology or Medicine in 1962, have since said that Franklin should have shared the award (though James Watson has since revealed himself to be a racist, sexist idiot).

Maria Margarethe Kirch was a somewhat unusual woman: living in the late 1600s and early 1700s, she was educated to the same standard as boys at the time, and was the respected work partner of her husband, astronomer Gottfried Kirch. The problem arose when Maria discovered a comet by herself in 1702 — and Gottfried took public credit. We're not sure entirely why; perhaps the couple thought she wouldn't be believed on her own, or he feared ridicule. Or he was just being a dick.

At any rate, Gottfried owned up publicly in 1710, but by that point, it was too late. When he died, Maria tried to take her husband's position at the Royal Academy Of Sciences, but the committee were incredulous and appointed a dude with little experience instead.

6. Emmy Noether Has To Lecture Under A Man's Name

Emmy Noether is regarded as one of the most influential figures in mathematical history. Ever. Albert Einstein thought she was the most important woman in the history of mathematics. And no, she's not a household name either.

Noether, whose work underpins a lot of modern physics, including the search for the Higgs Boson, was left out in the cold so thoroughly in her early career in Germany that she wasn't allowed to even give a lecture under her own name.

Her appointment to the University of Göttingen in 1915 was nearly blocked by an academic who remarked, "What will our soldiers think when they return to the university and find that they are required to learn at the feet of a woman?" Noether lectured anyway, but the lectures were advertised under the name of her colleague David Hilbert so nobody could kick up a fuss.

7. Jocelyn Bell Burnell Is Cheated Of The Nobel Prize

In 1967, as part of her Ph.D. thesis, Jocelyn Bell Burnell discovered radio pulsars, astronomical phenomena which are actually neutron stars that "pulse." There's no doubt that she was the first to discover and observe pulsars, but recognition was stolen from her. Her thesis supervisor, Anthony Hewish, took all the credit — and a Nobel Prize for the discovery in 1974 with another man, Martin Ryle.

The exclusion of Bell Burnell, now a Dame of the British Empire, from that award has been a hugely controversial part of Nobel Prize history, but it's hardly the first time she'd seen that sort of thing: she wasn't initially allowed to learn science at school because it wasn't a "ladylike" subject.