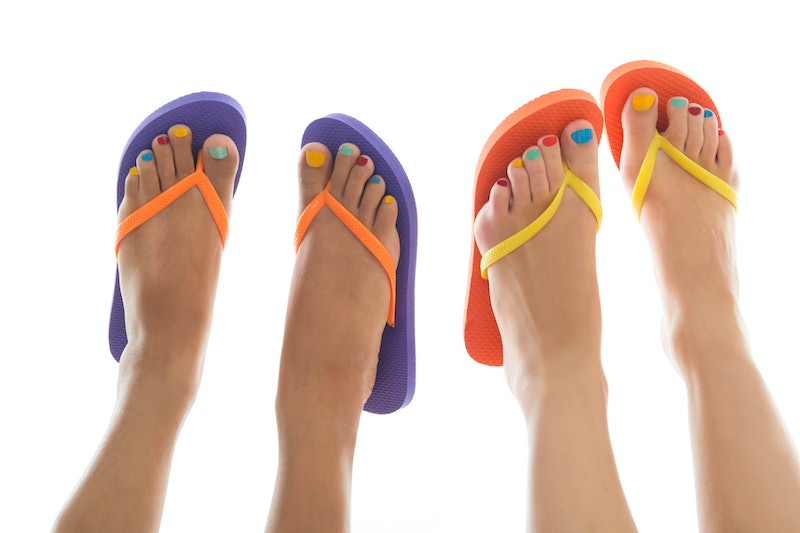 I have a long and storied history with flip-flops. Having grown up in Australia, flip-flops are a beach and summer go-to shoe for most. When I was growing up, Havianas were just about the coolest shoes you could own, and I saved my pocket money to buy myself two pairs: one pastel pink, and the other bright green. It was an innocent and horrible time, one filled with white pants, floral scarf dresses, band t-shirts (mostly JET) and, of course, insanely colored flip-flops. Thankfully I grew up, and realized flip-flops are stupid and absurd, and should never, ever be worn, especially by city dwelling folk.

The following is a PSA for the forthcoming summer: When you're hot and sweaty and looking for release, it might be tempting to wear the literal thong of the shoe world, but as we know from Pulp Fiction (and The Bible), the path of the righteous man is beset on all sides by the inequities of the selfish and the tyranny of evil shoe options. Blessed is he, who in the name of charity and good will, does not wear flip-flops. Translation: DO NOT WEAR FLIP-FLOPS. Here are 6 reasons why it's never okay to wear flip-flops in public.

1. Flip-flops are not shoes

2. No one wants to see that much of your foot

This will come as no shock to most of you, but feet are ugly. Flip-flops are like feet g-strings. You go out wearing them and you're forcing people to see a whole lot more than they asked to. While there's nothing technically wrong with seeing butts, or feet, generally in public we prescribe to certain dress codes so we don't frighten small children with parts of our bodies that are less pretty. Also, like butts, feet can be pretty gnarly, and callouses, bunions, and scaly heels shouldn't be a part of anyone's morning commute.

3. Your feet shouldn't be that exposed to the subway floor

It's not just about other people being exposed to your feet—think about what you're exposing your feet to. Sure, you're exposed to lots of gross stuff every time you step out of the house, but you can take off your shoes when you re-enter the house, leaving the piss and hepatitis at the door. You can't take off your feet, so you're stuck traipsing the day with you all over your spotless, germ-free abode. I'm saying this because I once saw a guy on the subway—a regular, nice dressed man, aside from his flip-flops—and the bottom and sides of his feet were almost entirely blackened. Think about that time next time you're choosing shoes in the morning.

Flip-flops do not look good. There is no way to actually articulate this, other than to say people look at flip-flops and have an identifiable emotion about them, which is generally interpreted as an aversion to them. They are ugly.

5. There are perfectly cute open toe options that are not flip-flops

There are so many beautiful, amazing shoes out there (I'm a shoe person), so why would you ever go for flip-flops first? Even if you want something in a flat sandal, the world is your footwear oyster, and you should crack it open and let all the strappy summer sandals spill out like the wonderful pearls they are.

If none of these other reasons have convinced you, then concern for your personal physical safety should. Flip-flops come off easily. They bend backward. You could trip. You could be driving a car and one gets stuck behind the break. YOU COULD REALLY HURT YOURSELF. Or worse, you could hurt someone else with all your clumsy flip-flopping around. Don't be a public nuisance. Don't put lives in danger. DO NOT WEAR FLIP-FLOPS.