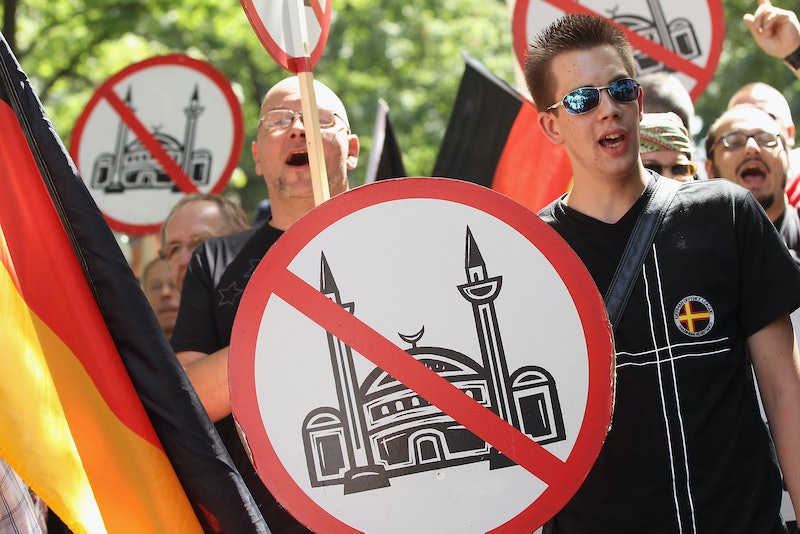 German authorities arrested four people Wednesday on charges that they allegedly founded an anti-Islam, right-wing organization and had stockpiled explosive material for attacks on places associated with Salafist Muslims, including mosques and refuge houses for Muslim asylum seekers. More than 250 officers participated in raids on nine homes across five states in Germany on Wednesday, turning up what prosecutors said in a statement was "pyrotechnics with large explosive power." According to prosecutors, the four arrested are accused of founding a right wing, anti-Islamic group called the “Oldschool Society” back in November. The AP attempted to reach out to the group using all available contact information, but wasn't able to.

The four people arrested for alleged terrorism and acquiring explosives, have thus far only been identified as Andreas H., Markus W., Denise Vanessa G. and Olaf O. They are all German citizens, prosecutors say.

"According to current investigations, it was the group's goal to conduct attacks in smaller groups inside Germany on well-known Salafists, mosques and asylum-seeker centers," prosecutors claimed in a statement. "For this purpose the four arrested procured explosives for possible terror attacks by the group."

Salafism is a more puritanical form of Islam. While many Salafists consider political involvement to be contrary to Islam, a small minority adheres to a more extreme strain of Salafi jihadism. According to the German news outlet Speigel Online, the Oldschool Society’s emblem featured a tank, Germanic runes often used in Neo-Nazi symbols and two skulls with the phrase, "One bullet is not enough."

The arrests come during a time of heightened tension in Germany. Last week, authorities announced that they had foiled an alleged plot from a Turkish-German couple to detonate bombs at a popular cycling competition in Frankfurt. Police said they were tipped off about the scheme when they noticed the 35-year-old man had apparently purchased a large number of bomb-making chemicals under a false name. According to authorities, both individuals had ties to the conservative Salafist community.

Over the past year, the influx of asylum seekers from the Middle East has sparked a series of anti-Islamic protests from right wing groups that claim the religion is a dangerous political ideology and that its adherents seek to take over the German way of life and impose sharia law. The conflicts in Syria and Iraq sent asylum requests to Germany skyrocketing up 60 percent last year to 200,000. And those numbers are not predicted to abate in 2015, says Overseas Development Minister Gerd Müller, but could reach 400,000.

In response, Germany has seen the proliferation of anti-Islam, xenophobic groups that are pushing an antidemocratic, racist agenda against the country’s burgeoning Muslim communities. Through the winter months, the controversial PEGIDA (“Patriotic Europeans Against the Islamization of the Occident”) led highly publicized marches against Islam against Islam in Dresden that drew thousands of people — and sparked significant anti-racist counterdemonstrations.

Not all of the tension has remained nonviolent. In a recent report, two German NGOs that work for asylum seekers’ rights found that 25 asylum shelters have suffered attack so far this year; three of those attacks were fire bombings. According to German Interior Minister Thomas de Maiziere, there was nearly a 23 percent increase in violent crimes committed by far-right extremists last year over the figures reported from 2013.

"Crimes that have a xenophobic, anti-Semitic and racist motive have especially increased," de Maiziere said to reporters in Berlin. "Increasingly, asylum seekers and refugee homes are being targeted. This development is worrisome and must be stopped.”

In turn, the German authorities have paid new attention to monitoring right-wing organizations for terrorist activity since it came to light in late 2011 that one such group had carried out a series of assassinations against Turkish Muslims stretching back to 2000. The National Socialist Underground, as it was called, was allegedly responsible for nine murders, two bombings, and 15 bank robberies. But officials only recognized the group and its xenophobic attacks after two of its members committed murder-suicide in 2011 following a failed bank robbery. The only surviving member of the NSU is now on trial in Munich.

Like many other ethnically homogenous countries in northern Europe, Germany faces an uphill battle to quiet tensions between its Muslim communities and those Germans who fear Islamic radicalization at home. No matter that only a very, very small minority of the Islamic world takes jihad to be a serious political mandate that necessitates the killing of non-Muslims. According to the German domestic surveillance agency, the Federal Office for the Protection of the Constitution, out of the 4 million Muslims living in Germany, only one percent are considered fundamentalists and only 1,000 are considered at risk of turning to violence.