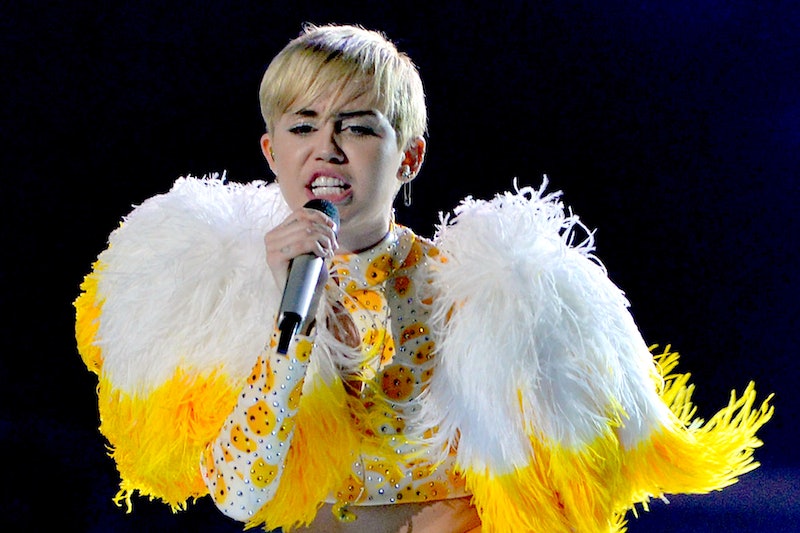 After months of preparation and promotion, on Tuesday Miley Cyrus officially launched The Happy Hippie Foundation, her charity benefitting homeless LGBT youth. The singer sat down with Out magazine to discuss the project's mission, programs, and personal significance. In the interview, Miley Cyrus said she doesn't relate to gender norms and the way sex-based societal expectations confine a person's identity. To borrow the words of Vanessa Bayer as Miley Cyrus, that's preeeetty cool.

As Cyrus told Out, Happy Hippie fulfills her in a way that commercial success never could. "I’ve experienced fame, and money, and all that s--t," Cyrus says. "And none of it will make you as happy as when you’re actually fighting for something."

In this case, Cyrus is advocating for the over a million homeless youth in the U.S. She places a particular focus on LGBT teens who feel that they won't be accepted by their parents, and choose to run away from home for fear of not being accepted or being thrown out.

Cyrus told the magazine that she identifies closely with the confusion that rigid expectations of gender put on people. As she explained to Out, she didn't really want to identify at all when she was growing up:

I didn’t want to be a boy. I kind of wanted to be nothing. I don’t relate to what people would say defines a girl or a boy, and I think that’s what I had to understand: Being a girl isn’t what I hate, it’s the box that I get put into.

Though Cyrus isn't using the terminology, it sounds like she's describing herself as genderqueer. People who describe themselves as genderqueer don't identify with the traditional gender binaries. As a result, they choose either not to identify their gender or view gender as fluid. In short, you recognize that gender is a social construct that confines people's identities in sometimes oppressive ways and refuse to adhere to it.

I don't want to impose any labels upon Cyrus that she doesn't come out and own herself. However, the sentiment she's sharing is one that I'm sure plenty of teens identify with, but don't have much of an outlet to discuss openly. Speaking from personal experience, I didn't quite learn the definition of genderqueer until college, and the same likely goes for many kids. But Cyrus' words will hopefully spread the knowledge that you don't need to identify with traditional gender dynamics to all types of people of all different ages and educational background because of her massive fan base. And it can't be denied that that's a great thing.