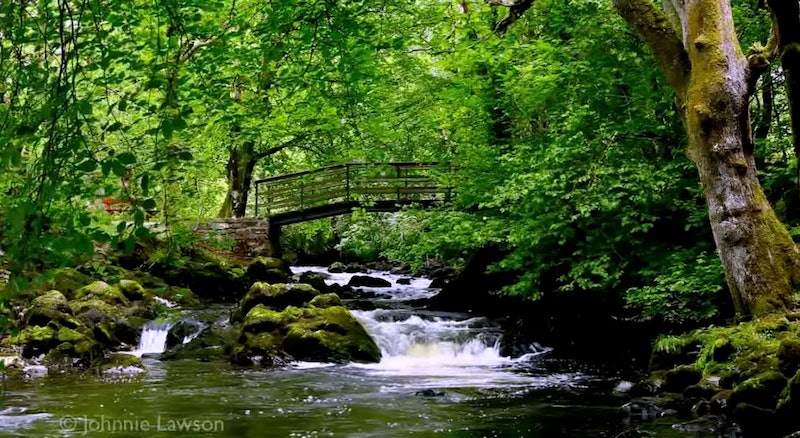 Having trouble sleeping? Here's something that might help: This eight-hour video of an Irish waterfall has apparently worked wonders for insomniacs all over the world. Who knew YouTube could be so relaxing?

The work of Irish artist Johnnie Lawson, the video is quite simple — it's just eight hours of footage depicting a waterfall burbling away beneath a small bridge. The forest around the waterfall is lush and green, and a chorus of chirping birds add an extra layer to the sounds of running water. Reads the video's description, “This is one of a series of videos designed for various needs: As a calming sound to play in the background while studying or as a soothing sound to play while you sleep.”

Lawson first began uploading videos to YouTube five years ago, at the end of December 2009. They are, for the most part, all similarly relaxing, and they range in length from a few minutes to many hours. The waterfall video is far from the only eight-hour one on the channel; however, it's by far the most popular, with over 6,000,000 views since it was initially uploaded in 2013. “People who were finding it difficult to sleep began writing to me from all over the world — North Korea, the Central African Republic, Beijing, and across the UK,” Lawson told the BBC. “They started leaving me messages saying the recordings were helping to relieve their insomnia.”

Indeed, it's even become part of a clinical trial being run by University College Hospital, University College London, and the Intensive Care National Audit and Research Centre. Said Dr. Dorothy Wade, a health psychologist working in the intensive care unit at University College Hospital, to the BBC, “The aim of the trial is to prevent intensive care patients from being traumatised and to cut the high rates of post-traumatic stress disorder found in ICU survivors.” Wade continued, “As part of the therapy, nurses give patients tablet computers with different relaxation materials on them. This includes Johnnie Lawson's videos of tranquil nature scenes.”

According to the Telegraph, Lawson shot this particular video after he realized how often he paused at the bridge, located in County Leitrim, to rest while walking his two dogs (Cavalier King Charles spaniels, for the curious). Said the artist, “Throughout the year as I watched the seasons change I felt it would be a wonderful scene to add to my collection of relaxing videos…. I chose late spring, when the leaves would have a rich green color and there would be a wonderful luminosity to the light falling through the canopy of trees, as the best time to record this space.”

“The world has got so fast,” writes the artist on his YouTube channel's “About” page. “Let us relearn to look and listen more slowly.” Excellent advice, indeed. Check out the full video below, along with a few of Lawson's other creations. Ready… set… relax!

1. For Eight Hours of Calm:

The waterfall video has you covered. Who needs a white noise machine when you have YouTube?

Just need to focus for an hour or so? Here's a shorter option: 60 minutes of relaxing noises.

I imagine this one would be perfect for a coffee nap. It's music, as opposed to nature sounds, but it's still pretty soothing.

Forest sounds don't do it for you? Give the ocean a shot instead.

5. For Two Minutes of Calm:

Two minutes of meditation is sometimes all you need to get yourself back on track.