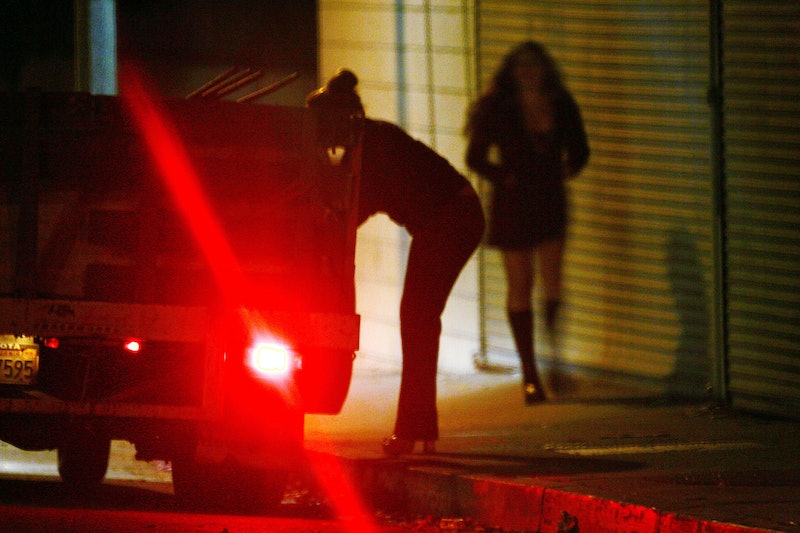 Next month it will become illegal for pay for sex in Northern Ireland, in an attempt to crack down on prostitution. It is one of many tactics that have been tested to deal with the volatile and dangerous prostitution industry. Although some countries have chosen to outlaw it outright, in others, like the UK, the act of prostitution is actually legal and it is the activities surrounding the act, like solicitation, that are crimes.

The safest way to deal with prostitution is a heated debate, and there are so many different ways countries handle it — In some countries the government pays for sexual surrogates. I thought it would be helpful to look at prostitution around the world, as a reminder that the issue deserves more attention and discussion. Did you know it's a booming industry? Or that there are 40 million prostitutes working in the world? Thanks to Finding Justice for a lot of these surprising statistics — their infographic is really worth checking out.

From the countries across the globe where it's legal to the average age to enter prostitution, the facts are pretty shocking. Here are nine things you need to know about prostitution around the world:

1. Northern Ireland joins Sweden and others in banning the act of paying for sex— and there seems to be something to it.

The BBC reports that "authorities in Sweden say the number of women on the streets in the prostitution area in Stockholm has fallen from 700-800 to 200 women since the legislation was introduced in 1999". Those are encouraging figures.

2. In some countries the government pays for sexual surrogates

There are some places where governments facilitate visits to sexual surrogates for the disabled. Remember "The Sessions"? It's sort of like that. Ms. Ribes tell the New York Times that "sexual assistance is about allowing a disabled person who can’t access sexuality in a satisfying way to reconnect with the body".

3. Prostitution is legal and regulated in 22 countries

With just under 200 countries in in the world, that's over 10 percent. It's certainly higher than I would have guessed.

4. There are about 40 million prostitutes working in the world

Let me say that again— 40 million.

5. And about 2.5 million are trafficking victims

This horrifying statistic is one that many prostitution legalizing debates shy away from. While there are arguments that legalizing prostiution may be able to make it a safer trade for some, it is harder to say what effects regulation has on the trafficking victims in the industry. And they're often the most vulnerable— one estimate says that 2 million children are trafficked and exploited in the sex trade. Equality Now shares the experience of one trafficking victim:

They forced me to sleep with as many as 50 customers a day. I had to give [the pimp] all my money. If I did not [earn a set amount] they punished me by removing my clothes and beating me with a stick until I fainted, electrocuting me, cutting me.

6. The average age to enter into prostitution is 13.

Another important reminder that it's not like Pretty Woman. There is nothing even remotely glamorous about a thirteen year-old girl working as a prostitute. And that's the average age, meaning many are much younger when they start.

This varies a lot from country to country, and the reasons vary a lot as well. Many report that they see prostitutes either because of unhappiness in their current relationship or to act on a particular fetish.

8. This means big money – but it's mostly for the pimps

All of these men paying for sex means prostitution is a booming industry. Huffington Post reports that pimps take home on average anywhere between five 5 and thirty five thousand dollars a week . We're talking hundred and hundreds of thousands of dollars a year.

9. About 80 percent of prostitutes have been raped

Prostitutes not only don't see most of their earnings, they work in some of the most dangerous conditions, with abuse and rape being all too common place. Susan Kay Hunter and K.C. Reed explained this best: "About 80% of women in prostitution have been the victim of a rape. It's hard to talk about this because... the experience of prostitution is just like rape. Prostitutes are raped, on the average, eight to ten times per year. They are the most raped class of women in the history of our planet." This is one of the reasons it's so important we find a way to change the prostitution culture.

More like this
How To Do The Intimacy-Boosting Lotus Sex Position
By Laken Howard and Lexi Inks
The Best Time To Date After A Breakup, According To Experts
By Bustle Editors
Jennifer Coolidge Got A Lot Of “Action” Thanks To 'American Pie'
By Catharina Cheung
Expert Tips For Being On Top When You're Plus-Size
By Lexi Inks
Get Even More From Bustle — Sign Up For The Newsletter