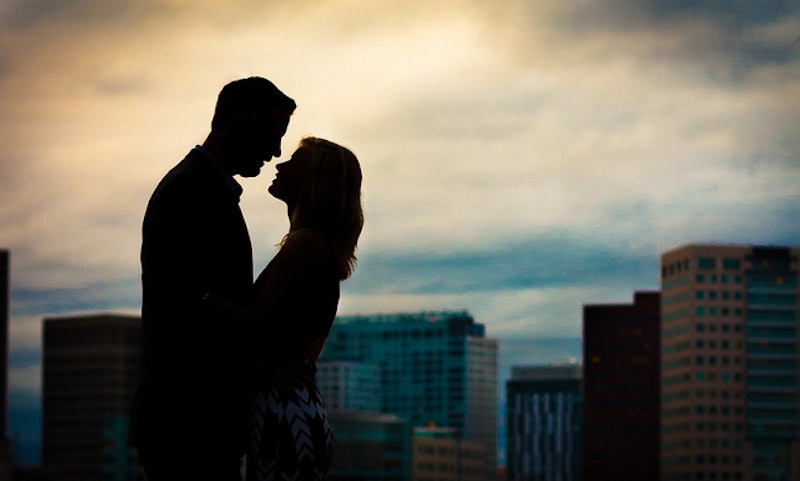 You've fantasized about them popping the question and suddenly, it looks like it's about to happen. Or is it? How do we know? In looking for signs you'll get engaged, it's really important to remember that marriage is a social institution, says Toronto based psychotherapist Wendy Brown. "Often what gets you there is romantic and passionate love. But love is not necessarily present when people decide to get married. Consider all the arranged marriages. When love does exist, it's probably very important in the decision to marry. However, most people need more than love to be able to foresee spending a lifetime with someone," says Brown.

Although this doesn't sound very romantic at all, the amount of money someone has and his/her income-earning ability is usually a consideration when it comes to getting married, says Brown. "That's because with marriage comes establishing and maintaining a lifestyle. Certainly, there are cases in which one of the individuals has chosen to be the primary or only breadwinner. But, there are many more in which each person has expectations of what his/her partner will earn," Brown says. A possible sign of getting engaged is reckoning with the whole issue of money, earning and lifestyle.

There are a number of issues that go along with lifestyle, like where to live, what to save for, whether or not to travel, how to spend free time and even what to do when you retire, says Brown. But another big one is religion. Not only is this important for your ongoing lives together but also it can be huge for the wedding ceremony itself.

Are you about to get engaged? here's how to know the signs!

"I help men and women who are looking for an engagement ring on a daily basis. After getting to know the clients (because we work so closely for weeks,) they often come back and tell me about their proposals. I find it interesting that many women tell me they thought their boyfriend was going to break up. They say that he was being sneaky, distant, busier than usual, etc. so it looks like he is cheating or prepping for a split. In reality, the guys are trying to keep a huge secret and plan an amazing proposal!" says Emily Duke of Diamond Envy.

2. They're chatting with your friends

Is your significant other talking to your friends more, asking them what you like, what your schedule is, or anything else that seems like he's planning something? Even better, is he/she directly asking you about your schedule and trying to plan something? "If your S.O. isn't a big planner and all of a sudden seems concerned about where you will be, and when you will be available, he is looking for a clear date to get on the calendar and pop the question!" says Danielle Rothweiler of Rothweiler Event Design.

They're thinking about the future and financial planning, says Anubh Shah, founder of Four Mine, a specialty engagement ring and wedding band retailer. They've been talking more about the future and his goals/plans. They want your advice and input because you’re included in the bigger picture, says Shah.

More like this
The 3 Zodiac Signs Most Likely To Get Married Later In Life
By Kristine Fellizar
4 Zodiac Signs That Will Take Forever To Admit They Like You
By Kristine Fellizar
I Spent 2 Years Trying TikTok’s Dating Advice
By Kailynn Johnson
18 Hinge Prompt Answers To Try If You’re Looking For Something Casual
By Lexi Inks
Get Even More From Bustle — Sign Up For The Newsletter
From hair trends to relationship advice, our daily newsletter has everything you need to sound like a person who’s on TikTok, even if you aren’t.