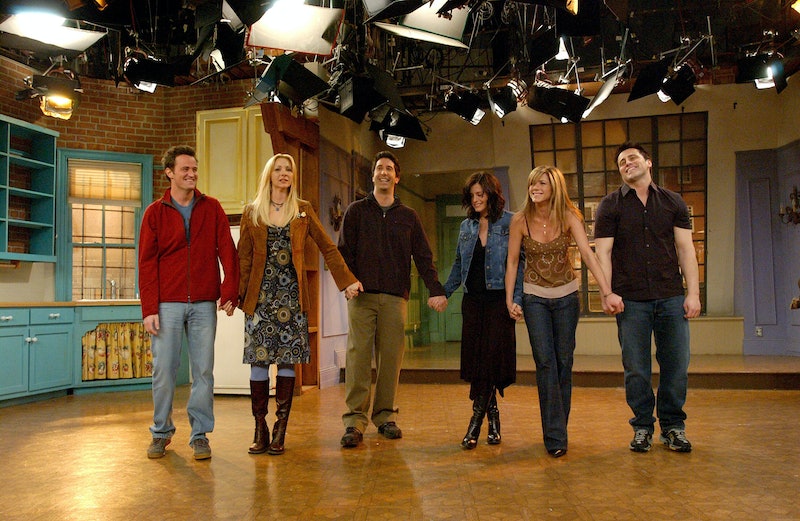 Hey listen, I'm not trying to ruin your day or anything, but the Friends finale aired 11 years ago. THE FINALE. And the first episode aired 10 years before that, so I guess what I'm saying is that, in the space, of two sentences, I just stole two decades of your life, thank you very much. I don't know what you personally were doing on May 6, 2004, but me and 52.5 million of the rest of us were plopping down in front of the TV with a box of tissues to watch "The Last One," the two-part series finale of a show that changed television forever, and maybe was the first pop culture phenomenon to teach you that you wanted to grow up hilarious.

Got a little specific to me at the end there, but I can't be the only person whose sense of humor was influenced by the show's very specific brand of comedy... maybe just the only person to admit it. But I don't mind, because I'm not ashamed! I have very real, earnest love for Friends, and it was a big thing in my life, both as a watcher of television and a student of comedy, although please never tell anyone I used that phrase. Also, if you ever need someone to recite lines from the show while you're trying to enjoy it, please give me a call, because that's ~my move~.

So while I wait for the phone call inviting me and all my terrible TV-watching habits into your home, let's walk through the best moments of the Friends finale, to give this show all the love and appreciation that it deserves.

When Erica Gave Birth To Twins

The woman carrying Monica and Chandler's baby was only supposed to be pregnant with one baby, but it turned out to be twins, which rounded out the totals for the Friends in a very pleasing way: Rachel had one baby, Monica had two, and Phoebe had three.

When Gunther Confessed His Love To Rachel

FINALLY. Not that they were ever gonna get together, but that took you long enough, buddy!

Monica and Chandler named the twins Erica, after their biological mom played by Anna Faris, and Jack, after Monica's dad. Which is fun because, eight years later, Faris gave the same name to her real life son with Chris Pratt.

If there's one thing this couple loves, it's chasing each other down at the airport.

...And They Were At The Wrong One

Oh my god, remember how your heart sank when it turned out Phoebe and Ross went to JFK when Rachel was actually flying out of Newark? Way to raise the stakes.

When 'Phalange' Makes Another Appearance

It's only fitting that Phoebe's go-to word got thrown in there one more time when she called Rachel on the plane and told her there was something wrong with the plane's "left phalange."

When Even Ross And Rachel's Reunion Is A Cliff-Hanger

They kept us on the edge of our seat to the last, with Rachel turning Ross down at the airport, only to have him come home to a voicemail from Rachel, which cuts off. And then there she is, standing at the door, ready to be with Ross. And then they kiss and kiss.

When Joey Gets To Keep The Baby Chick And Duck

He'd bought them as a housewarming present for Chandler and Monica's move to the suburbs, but hey, unlike everybody else, the guy has pretty much zero big life events in the finale, so let's at least give him some pets.

Could honestly cry right now just typing that, and now I gotta watch the GIF, also? Welp, here I go.