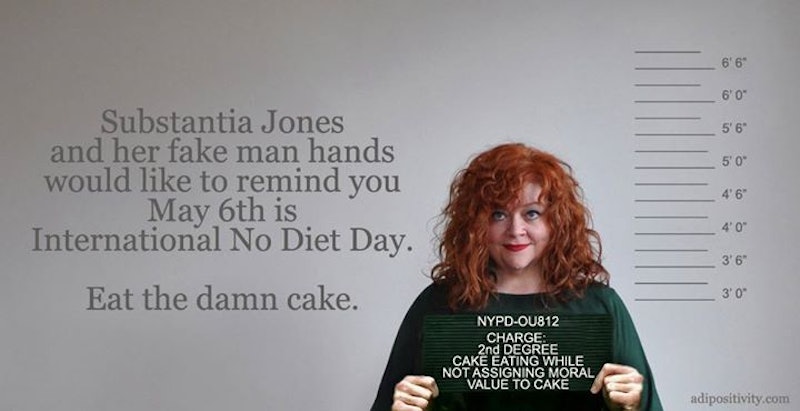 The human relationship with food is a complex thing. In essence, we're constantly made to feel guilty for eating. Or, in other words, for doing something that's required for basic human survival. Of course, there are plenty of reasons for this. The diet industry is a multi-billion dollar corporation that thrives off of creating an often flawed product to make its consumer feel bad when they re-gain the weight, only to turn to — you guessed it — the diet industry. And we obviously live in a world that thinks "fat" is just about the worst thing a human can be, on par with things like sociopathy or hating puppies. So "logically," being made to feel guilty about eating will make people less inclined to do things that make weight gain more probable.

As a fat woman who isn't ashamed of, you know, being fat (how dare I, right?), I hear this sort of food shame all the time: "Are you really going to eat that second cupcake?" "You know you don't need more than 1500 calories a day to stay alive, right?" "That pint of Ben & Jerry's isn't going to make you happier!" But because today is International No Diet Day (a.k.a. The World's Greatest Holiday), there is, perhaps, no grander time to proclaim, "Yes, I am going to eat that second cupcake. I know I don't need more than 1500 calories a day, but I'm sick of suppressing my love of food just because I'm not a size 2. And you better be joking if you don't think that Chunky Monkey is going to take my day from a 4 on the Scale of Happiness to a solid 9!" And that's precisely what the swoon-worthy Substantia Jones, plus-size activist of The Adipositivity Project, did when she shared a pretty epic photo on social media:

Through Substantia's photography, she preaches body positivity, fat positivity, and ultimately, a buttload of self love. And in this delightful little demonstration, she reminds us that we should all "eat the damn cake." Her "mug shot" suggests she is guilty of a treacherous crime: "Cake eating while not assigning moral value to cake." And, at first, it seems kind of silly — laughable, almost. Why would anyone assign moral value to a slice of cake?! Well, welcome to Earth, guys, because that's exactly what we're taught to do. Our worth is set to be correlated to our aesthetics. And if "thin is the only beautiful," then food is a "natural enemy."

According to International No Diet Day's Facebook page, May 6th is about one thing and one thing only: Loving your body at any size, not feeling guilty for enjoying the foods you love (no matter what size you are), and, of course, not dieting for a day: "I will accept myself just as I am. I will feed myself if hungry. I will feel no shame or guilt about my size or eating. And i will LOVE MYSELF for who I am, not who I feel pressure to be," the page reads. And what a utopia it would be if we could apply this mantra to the everyday!

Perhaps initially, though, we all need to take things in baby steps — so that one day in the not so distant future, we can see that cake for what it really is: A delicious slice of chocolatey heaven on Earth.

Because Substantia and International Diet Day are two of the raddest of entities, let's look at seven other reasons we should never feel guilty for enjoying food.

1. Because We're Lucky To Have It

So often whenever anyone commits the "deadly sin" known as gluttony, we're presented with the argument: "How can you eat so much when there are impoverished people all over the world without food!" But here's the thing: Americans throw away more food per anum than plastic, paper, metal, and glass. In fact, in 2012 we threw out approximately 35 million tons of food. We're wasteful and careless with it — and I'm willing to believe that oftentimes, food is thrown out solely because we "don't want to over-eat and get fat."

2. Because We Need It To Survive

This should be obvious, and yet, it's just not. The human body needs food for survival. It's instinctual. It's necessary. It's not up for debate. Calories are ultimately energy, and they're forms of energy that are essential in order to carry on living. Rather than pretending we'll "be OK" if we skip a few meals here and there because that's somehow more respectable than eating a hot dog, why not eat the hot dog and avoid, I don't know, passing out from fatigue?

3. Because Life Is Too Frikin Short

Yes people, before you know it, we'll all be dead. Or possibly extinct (because #humans). But when you're 80, would you rather look back at your life and think, "Well, I did an awesome job at counting calories and making myself miserable," or, "I'm so glad I got to eat that pizza in Italy, nom on that amazing Mediterranean salmon, and enjoy the ecstasy that is a cheese feast with a bottle of Moscato?"

4. Because Your Worth Is Not Correlated To Your Calorie Intake

The fact that we've been taught to believe that the number on the scale or the amount of burgers we eat in a year are directly correlated to whether or not we're good people is pretty disturbing when you really consider it.

Contrary to popular belief, there are so many worse things you can do than eat. You could be a serial killer. You could be a ruthless misogynist. Heck, you could be that Internet troll who spends 14 hours a day seeking out women to food shame.

5. Because Eating That Cupcake Won't Actually Make You Fat

I spent the majority of my adolescence convinced that if I ate a chocolate bar, I'd gain 10 pounds overnight. That won't happen. Obviously not everyone wants to be fat — and not everyone should be fat. (What a boring world it'd be if only one body type was allowed to exist!) But thinking that one little cookie is going to make you balloon come the morning is no way to live!

Without getting into the age old and flawed debate that is "being fat is always unhealthy," let's look at this from an aesthetic perspective. I don't believe that everyone who is scared of being fat is scared because they fear they'll one day be ill. Many people are afraid of fatness because, well, we've been conditioned to think it's unattractive. But just stop that thought right there. Fat bodies, like all bodies, are beautiful. They're filled with curves and softness. They're comfortable to lie on and fun to dance around and jiggle — if you let them be. Our bodies worst enemy isn't food — it's ourselves.

7. Because Food Is Our Real Life Utopia

And finally, food is delicious, OK?! Stop throwing it away. Stop telling it you hate it. Just stop. Life isn't supposed to be about fitting into some pre-conceived notion of beauty or health or whatever other bull-shitty thing we're taught. It's supposed to be about doing things that make us happy. If you know in your heart of hearts that eating a donut is going to make you smile, just do it. I swear, it's worth it.