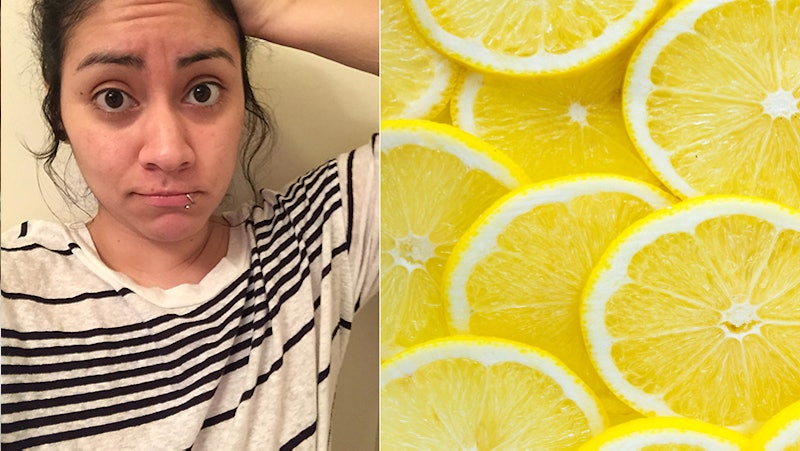 Drinking water is a no-brainer for people looking to improve their skin. Of course, people are always finding ways to spice up simple tasks, and drinking water is not excluded. For a while now, health bloggers have been raving about the benefits of drinking lemon- nfused water, including clearing up skin. As a woman whose skin is prone to break outs, this definitely caught my attention.

In case you don’t know, infused water is water with slices of fruits and/or veggies. Ever heard someone order water with lemon? Although it's extremely common, it's technically infused water. However, unlike this kind of water where someone simply plops a slice of lemon into a cup, infused water tends to be prepared ahead of time and left to sit so that the water can really soak up the flavors and nutrients. Once this has been done, depending on what ingredients you’ve used, it is said that it can help with a variety of things like curbing your sweet tooth, detoxing the body, and helping clear up skin.

In order to see if drinking infused water actually helps clear skin, I decided to drink lemon water for 10 days. I planned to replace all my usual, boring H2O with lemon-infused water, while still allowing myself the pleasure of other liquids (morning coffees keep me alive). Usually, I drink around 96 oz. of water every day because I just love water, so I knew the drinking part wouldn’t be a problem. But since lemon water erodes teeth enamel, I switched from my usual Nalgene to my reusable tumbler that let me drink from a straw.

Originally, I had planned to try this out for seven days. However, one of my friends informed me that it might take my skin longer to adjust and see “results.” So on day seven, I decided to keep it going for another three days in the hopes that it would give my skin a little more time.

Throughout the experiment, I kept everything else about my face routine the same. At night, I washed my face (exfoliating every few days), moisturized, and sometimes applied tea tree spot treatments on some pesky bumps. In the mornings, I rinsed with warm water only and reapplied my moisturizer. I’m pretty lazy in my upkeep because I just can’t be bothered most nights. Thankfully, due to my job’s dusty environment, I don’t really wear makeup during the week, so it makes it easier on my end as I don’t have to remove it and then wash.

When I first started, I was rather excited to be adding some flavor to my water. I love lemon anything and could see no wrong in finding another way to incorporate it into my life. But too much of anything can sometimes be an overkill. By the end of the experiment, I was seriously craving the bland, tap-water taste I was so accustomed to drinking. Yes, it tasted great for the first few days, but by day six, I just wanted some cold, plain ol' H2O.

I also found that I was thirstier, even though I knew I was drinking enough water. It might have been the acidity (too much of it?), but I seriously could not quench my thirst. The acidity level also caused a few of my taste buds to get swollen (in Guatemala, it’s called “fuego”), which are uncomfortable to say the least. Every once in a while I'll get one on my tongue, but in the last 10 days, I had about five or six develop!

In terms of my skin clearing up, I didn’t see much change either. It could be my overanalyzing personality, but it looked a little worse than before. I will say that a few of my annoying spots did clear up (the one right over the bridge of my nose and one near my chin) and my skin looked a bit brighter than it did 10 days ago. Nevertheless, the general spottiness of it was still very much there. Maybe not much happened because I still drank other liquids along with the lemon water, but if someone’s looking to add something new to their routine, it shouldn’t require them to have to give up everything else for whatever length of time they deem necessary.

I’m not sure if I would ever try this again. It wouldn’t be because of the little change in my skin, but for all the other things that happened while I was drinking the lemon water. I’ll probably still drink infused water here and there, trying other combinations of fruits and veggies. It might not be super helpful for clearing skin, but it does taste wicked good, as long as you don’t drink it for 10 days straight!

Images: (right photo) Fotolia; Giphy (2); Personal photos and videos (I probably should have done them horizontally, so I apologize).

More like this
Everything To Know About Daxxify, The Newest FDA-Approved Skin-Jectable
By Olivia Rose Ferreiro
15 Must-Have September Beauty Launches, According To Our Editors
By Rachel Lapidos
This Week’s New Makeup Releases & More Beauty Headlines
By Audrey Noble
13 Caffeine-Infused Eye Creams, Patches, & Serums For Puffy Under Eyes
By Olivia Rose Ferreiro
Get Even More From Bustle — Sign Up For The Newsletter