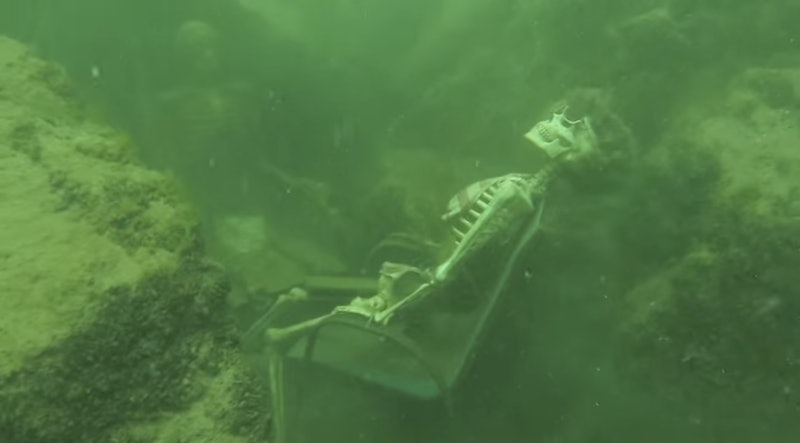 It started out as a terrifying search, as a diver with the Buckskin Fire Department in Parker, Arizona, was undoubtedly sure he was about to come across the remains of an awful crime long hidden underwater. A man snorkeling in the Colorado River on Monday had reported to police a gruesome sight — two full skeletons he discovered underwater in the river bed. Authorities believed they could be human remains, and a diver went out with a video camera attached to his body. What he found instead, well, wasn't quite the crime scene he was expecting. Instead, it was two underwater skeletons having a tea party while reclining in a couple of lawn chairs, all 40 feet under the surface of the Colorado River.

What? Surely no criminal goes to this kind of bizarre effort, right? It turns out the skeletons were entirely fake, and apparently a reference to the film Weekend at Bernie's. That's right. Tricksters apparently bound the lawn chairs to rocks to keep it all underwater, leaving a sign that said "Bernie" and "dream in the river," though the rest of the words were illegible. Some suspect the sign was meant to say "Bernie livin' the dream in the river." The two skeletons were even donning sunglasses, just like in the movie, during which Bernie's dead body is schlepped around by his employees, at one point even falling off a boat, into the water.

Before the department knew all of this, though, it had to be a harrowing experience for the diver who went out to investigate. As he descended upon two moss-covered skeletons, this is what he saw as he rounded the corner of a rock. Look in the top left corner.

At this point, I would have nope'd right out of there. But the intrepid explorer kept going.

The bubbles make him extra scary.

And creepy, too. The diver sees the sign on this one's body, and reaches forward to brush the moss off to read it.

Livin' the dream on Aug. 16, 2014, apparently, which is when investigators are assuming the skeletons were put in the river, you know, just to chill like bros do.

Maybe a little too chill.

Lt. Curtis Bagby of the La Paz Sheriff's Office, to whom the discovery was originally reported, said the department won't investigate who put the skeletons at the bottom of the river, telling the Associated Press he doesn't want to make a big deal out of it. In, fact he says, he might even use the two plastic buddies to set up outside the office as a joke. He told the AP:

I don't think they were trying to set up anything to scare anyone. I think they were gonna try to be funny. ... We like to show some things that are fun, some levity too.

If Bagby and the Sheriff's Office want to have some real fun, maybe they should incorporate the Bernie dance into their lives, which is the only move I know how to do at dance clubs. Bagby, the skeletons, me: Aren't we all just livin' the dream?

More like this
The Families Of Grenfell Tower Are Still Waiting For Justice, Five Years On
By Bustle UK
Here's How To Stream 'Downton Abbey: A New Era' & The New 'Downton' Channel
By Alice Broster and Sam Ramsden
The Guide To “Witches Stairs” & Why They’re Actually Great For Small Spaces
By Emma Garza
The ‘Squid Game’ Season 2 Renewal Teases A Creepy New Figure & A Return
By Brian Anthony Hernandez and Bustle Editors
Get Even More From Bustle — Sign Up For The Newsletter