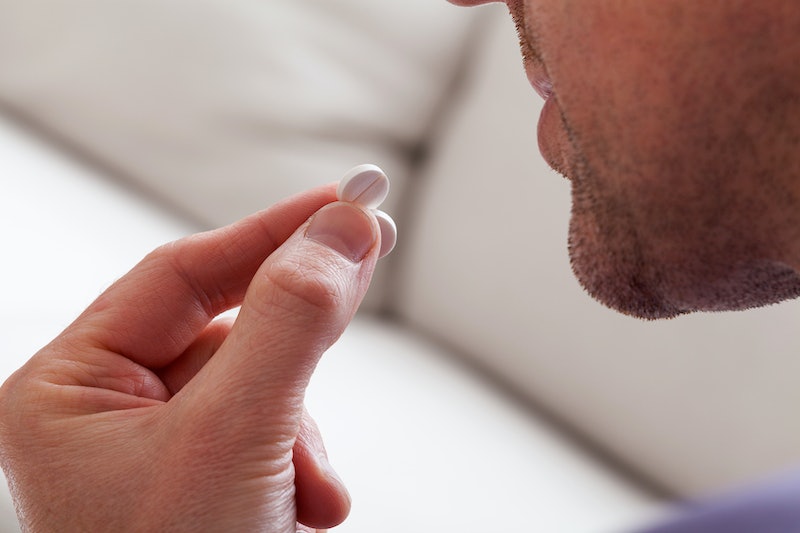 In the world of pharmaceuticals, the idea of a male birth control pill that works like the female version has been percolating for decades. And if you pay attention to splashy headlines, there have been serious steps forward in the past ten years. It seems that every few months a new discovery is heralded as the newest, most effective way of producing widespread male contraception, only to be superseded by an even shinier, fancier idea. The overall impression is of a scientific field crowded with viable options for sperm-stopping, all bursting to be produced. But is this picture realistic?

Experts don't think so. One who spoke exclusively to Bustle, Professor Ilpo Huhtaniemi of Imperial College in London, put the timeline of a widely available male contraceptive pill at "probably ... tens of years, unless something unexpected happens. There have been so many disappointments in the field recently," he added, "that it is hard to believe in rapid progress."

That's not the shiny optimistic picture we've been shown in excited articles about the future of male contraception — but it speaks to what really happens between a eureka! moment in a lab and a pill hitting the market. That ain't no pleasure cruise, and for the male contraceptive pill, it may prove to delay it indefinitely.

So what's really going on with the male contraceptive pill — and what's standing in the way of every man in the world having to set a pill alarm on their phone? Huhtaniemi has some answers — but, as he warned me, it's "not so good news."

Why Is A Male Contraceptive Pill So Tricky To Make?

The basic reason we haven't got a male contraceptive pill yet, at least on a physical level, is because of sperm — the slippery little suckers. Stopping them is tricky; only one can get you pregnant, and men produce thousands with each ejaculation. Male contraception studies have tended to pick from a variety of approaches, from hormonally altering the body to stop making sperm to producing sperm that don't fertilize — or, in the case of one much-hyped Australian discovery, blocking sperm cells from leaving the body by fiddling with proteins.

It's also taken so long because, frankly, condoms and vasectomies both seem to satisfy demand, even though they're either one-use-only or basically permanent. The development of a mid-range male contraceptive is, understandably, less of a priority for researchers and funding committees than getting female contraception to developing countries, or finding a cure for cancer.

The leader of the Australian research team, Dr. Sabatino Ventura, told the media in 2014, "You've already got a good female contraception, so people don't think we need a male equivalent. It's more like: 'Oh, that would be handy, but we could probably do with curing a whole lot of other diseases beforehand.'"

The issue is complicated by the fact that the pursuit of long-term male fertility control has actually got two strands: hormonal and non-hormonal. It's actually pretty simple — the hormonal solutions use hormones to attempt to prevent pregnancy, while the non-hormonal ones are injections or other ways of physically interfering with the sperm and how it gets to the uterus. One promising non-hormonal method is Vasalgel, which is an implant that temporarily prevents sperm from getting out of the body. (Yes, an implant, in the testicles. It's got some questions about user-friendliness.)

But Vasalgel seems to be hitting roadblocks: it hoped to be on the market by 2015 but nothing has materialized (new hopeful projections are 2017), and the Parsemus Foundation, who are behind the injection's development, said that they "aren't doing much media any more" when contacted for comment. A variant, RISUG, has been on trial in India, but a Vice journalist recently discovered that the human trials had been mysteriously put on hold in 2002.

Despite mighty public enthusiasm, we're still waiting on the male contraceptive front — and Huhtaniemi thinks he knows why.

So What's The Damn Hold-Up?

According to Huhtaniemi, the problem isn't necessarily with the science; it's got multiple layers through all the levels of the pharmaceutical industry. Despite what the newspapers might imply, just because an amazing scientific New Thing has been discovered doesn't mean it'll pop up in Walgreens next week; making results into products takes years, buckets of money, loads of testing, jumping through legal loopholes, and serious backing from a pharmaceutical company willing to actually market the thing.

Huhtaniemi believes that there are multiple issues pushing the male contraceptive pill off the top of the priorities list. The real problems, for him, can be divided into three: funding, the pharma industry as a whole, and patenting.

One of the major obstructions to producing a male contraceptive pill in the near future, Professor Huhtaniemi told me, is "the general attitude of funding bodies and political decision makers that improvement of contraception is not important" — and lack of funding in general. Other things have the spotlight, and even if something gets a glamorous cover story in a newspaper, that doesn't often translate into hard cash unless people can convince funding bodies that they're doing serious good. It's just not viewed as urgent enough.

Once you get over the hurdle of funding the research, the problems don't disappear; if anything, they get worse. The pharmaceutical industry's attitude towards the male pill isn't overly enthusiastic; the German drug company Bayer, one of the biggest in the world, has officially stopped researching it at all. Huhtaniemi pinpoints two reasons for their reluctance — fear of lawsuits and not enough profit.

The industry, he said, "is afraid of litigation because here, the 'patient' would be a young healthy individual, and there is marginal tolerance for side effects." If it were, say, a drug for a sick elderly person or for the chronically ill, a few problems here and there — nausea, weight loss, headaches — would be seen as acceptable. But the target market for the male pill isn't ill at all, so they likely wouldn't put up with anything other than a perfect, mostly side effect-free product.

Bruce Lehman, President of the International Intellectual Property Institute, has written that new products are so hideously expensive for companies to produce that they've "disproportionately directed" their research into stuff that rich countries want. Poor people can't pay, so their needs aren't on the table.

In 2009, a study in China showed that a testosterone-based treatment was 99 percent effective in preventing men from causing pregnancy in women: Out of 1045 participants, only nine pregnancies resulted. The world thought they'd found the hormonal male contraceptive bombshell — but nothing has come of it. The reason? You can't patent something like testosterone to make into a product.

"Some promising compounds, like testosterone, cannot be patented," Huhtaniemi lamented. Patenting matters in pharmaceuticals; it's how one company guarantees another can't copy the same formula. It's incredibly expensive to patent and put a new product on the market, and if you can't be the only person in the room selling it, it might not make you a profit. Hence no testosterone pill.

So, Will It Ever Happen?

In March of this year, an article in the Atlantic called the obstructions in the way of a male contraceptive pill "enormous," and in the roll-call of potential ideas that followed, none was even close to production by a pharmaceutical giant. Even the one that seemed most amazing for other uses — the so-called Clean Sheets pill, which allows orgasm without any sperm and so has the potential to prevent the spread of HIV — is still trying to gather support for a $400,000 study into development and side affects.

Professor John Guillebaud, who is part of the team behind the "dry orgasm pill," told me via phone that he'd been working in the field of male contraceptives for twenty years, and that "people always say it'll take ten years" for their new drug to hit the market, but that they never do. He agreed with Huhtaniemi that the problem was money, but added that he believed preconceptions about whether men really wanted to take a pill — and whether women believed they'd remember — were the biggest spanner in the works.

The facts prove this idea wrong: in a 2004 study, an average of 57 percent of men from nine different countries said they'd be willing to take male fertility control — but it remains a pervasive myth, and a serious deterrent for funding bodies who believe there's simply no market for the product.

So if you want to get the male birth control pill on the market, sign petitions, donate to studies, write to pharmaceutical companies, and encourage people to sign up as study subjects — but maybe hold off on that "Birth Control For Everybody!" party you'd been planning. By the looks of things, it may still be a long time before it happens.

More like this
12 Aphrodisiac Desserts To Spice Up Your Valentine’s Day
By Kaitlyn Wylde
25 Inspiring Quotes From Black Women To Celebrate Black History Month
By Kyli Rodriguez-Cayro and JR Thorpe
Here’s Where The NHS Nurses’ Strike Currently Stands
By Sophie McEvoy
My Partner Wants Me To Wear A Diaper During Sex. Help!
By Sophia Benoit
Get Even More From Bustle — Sign Up For The Newsletter
From hair trends to relationship advice, our daily newsletter has everything you need to sound like a person who’s on TikTok, even if you aren’t.